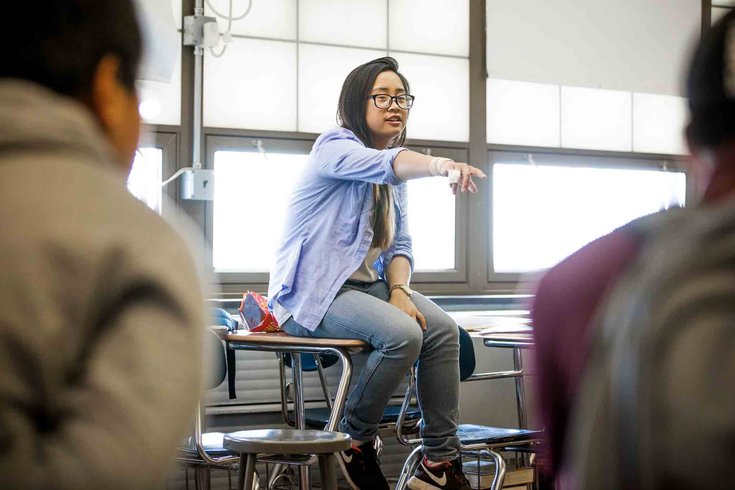 Van Sam, who will attend the University of California, Berkeley, in the fall via a full Gates Millennium Scholarship, has stepped out of her shell through various activities at BPSOS.

For Van Sam, a Vietnamese immigrant who will soon graduate high school, one local organization has proven a game-changer for her successful transition to American life.

The outgoing 18-year-old senior at Academy at Palumbo in South Philadelphia recalls feeling uncertain about her place in her adopted hometown until she became involved in a youth group sponsored by the Delaware Valley chapter of Boat People SOS.

The chapter is part of a national non-profit organization founded in 1980 to help Vietnamese refugees. It has 11 offices in the United States, including Philadelphia and Pennsauken, N.J., and four more in Southeast Asia and Taiwan.

“I wish I had found BPSOS when I first came here,” says Sam, who arrived in Philadelphia with her father in 2008. “I was really shy in the beginning. The first three years were terrible. I was bullied, and I struggled a lot with why I was here in the first place.”

Sam, who will attend the University of California, Berkeley, in the fall via a full Gates Millennium Scholarship, has stepped out of her shell through various activities at BPSOS. She has helped interview nail salon workers, worked to get out the vote and acted as a volunteer coordinator for the group's Lunar New Year Celebration. Sam is the fifth BPSOS youth group member in the last five years to receive a Gates scholarship, according to Nancy Ngyuen, BPSOS-Delaware Valley's executive director. 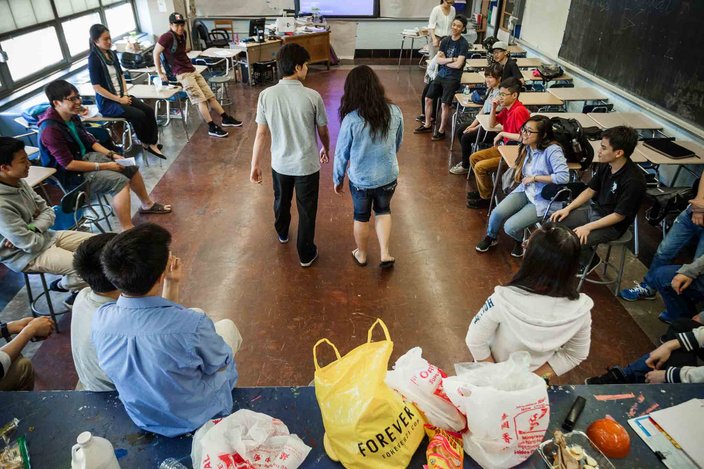 Students in the BPSOS youth group attempt to "walk a mile in someone else's shoes" in an icebreaker activity during a meeting last week at South Philadelphia High School. (Thom Carroll / PhillyVoice)

A SAFE PLACE FOR YOUTH

The youth initiative has been a major focus for BPSOS since 2009, when the group joined a coalition of organizations led by Asian Americans United to address violence targeting Asian students at South Philadelphia High School.

“Those events helped determine our direction,” Nguyen says. “We were in the right place at the right time.”

Son Nguyen, a 2014 graduate of South Philly High School, was one of those who got involved in the youth group around the time of the headline-generating attacks at Southern. The 18-year-old son of a shoe factory worker mom and a lunch truck worker dad, he credits his experiences with the youth group with helping him get accepted to Penn State Brandywine. He has wrapped up his second semester there, but hopes to transfer to Temple University, where his three sisters are students, and eventually become a doctor.

“I didn't have many Vietnamese friends until I came to BPSOS,” he says. “I was able to improve my English, and met people who helped me to apply for college scholarships.”

This summer, BPSOS youth group members will take part in a service-learning project that will send them out into the community to interview Vietnamese-Americans about their experiences in the United States and participate in an intergenerational “food justice” initiative with senior citizens to cultivate a half-acre plot in Camden. 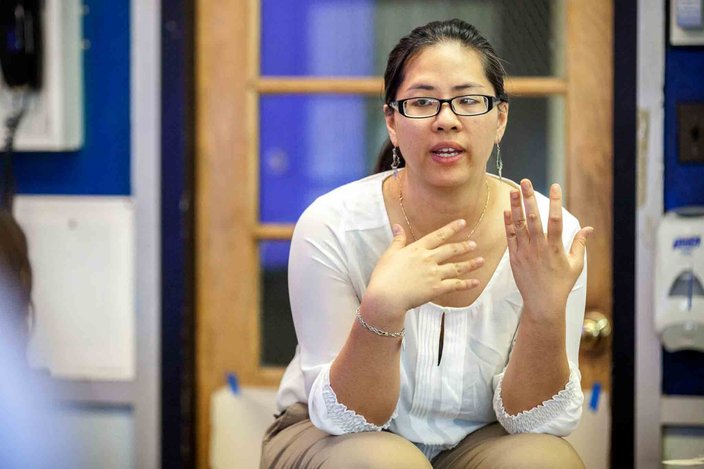 The youth initiative has been a major focus for Boat People SOS since 2009, when Asian students were targeted for violence at South Philadelphia High School, executive director Nancy Nguyen says. (Thom Carroll / PhillyVoice)

Besides running youth groups in English and Vietnamese, BPSOS works in the areas of civic engagement, community building and health promotion.

On a recent day, its office in a converted former rowhome in Philly's Bella Vista section bustled with a youth panel discussing gender issues in the basement, an English-language conversation class on the first floor and a grammar session taking place on the second. On other days, youths meet at South Philly High or partner organization Fleisher Art Memorial.

With nearly six in 10 Vietnamese people of “limited English proficiency,” a big focus for BPSOS is providing support for clients, so they don't get overwhelmed by the system. The group over the past several years also has helped 200 people to naturalize.

“The language barrier is the big issue for navigating the healthcare system, the education system and the immigration system,” says Linh Pham, civic project coordinator-case manager.

Another recent push has been to help increase the vote among the Vietnamese and broader Asian community. The initial effort for the 2012 elections sought to reassure recent citizens, who feared getting involved in anything political because of the “historical trauma” of Vietnam during the war years, that voting would be “a safe activity,” Nguyen says.

For that election, BPSOS registered almost 500 voters, with nearly three in four participating for the first time.

“That changed the story for us to how do you facilitate involvement,” Nguyen said.

By helping to sign up voters during last year's gubernatorial election, BPSOS sought a first-time role in this year's municipal races. A May 2 forum for city council candidates, in partnership with other Asian organizations, featured seven contenders, who addressed an audience of 150.

“This is the first time the city has seen Asian organizations trying to pull together and galvanize the community around a municipal election,” Nguyen said.