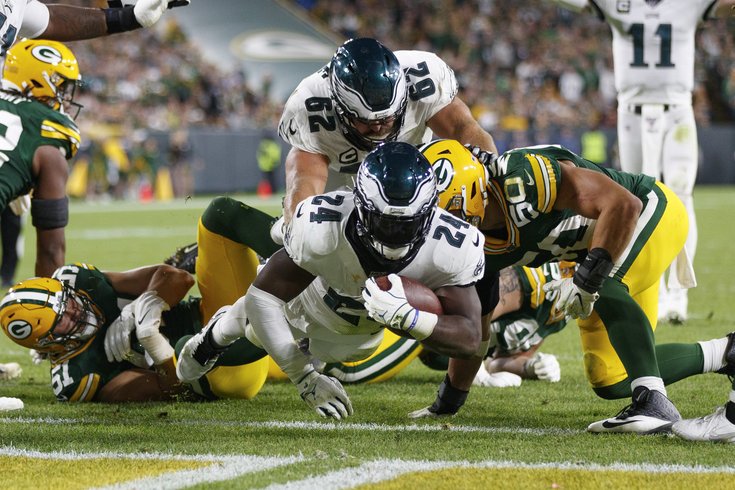 Jordan Howard and Miles Sanders are becoming a solid 1-2 combo.

The Philadelphia Eagles headed into Lambeau Field a wounded, reeling team in desperate need of a win, and they showed their resiliency as they have done in the past in getting back to 2-2 on the season with a huge win on the road on a short week.

1) The 'Statement Win' Award: Carson Wentz and the Eagles

There's an argument to be made that this was the best win the Eagles have had as a team under Wentz. Facing a potential 1-3 record, the Eagles' backs were against the wall heading into this matchup, and it looked like things might go sideways quickly after the Packers jumped out to a 10-0 lead.

But the Eagles remained resilient, as they (almost) always have been under Doug Pederson, and they battled back for a huge win.

Wentz got a boost from the rushing attack, and wasn't needed to put the team on his back. There's an argument to be made that Wentz played better in Weeks 2 and 3, which of course were games that the Eagles lost.

2) The 'Thunder and Lightning' Award: Miles Sanders and Jordan Howard

Or smash and dash. Shake and bake. Whatever you want to call them, Sanders and Howard complement each other very well.

“He brings the power, I bring the speed,” Sanders said after the win.

The Eagles were a perfect 4/4 on trips inside the red zone, coming away with four touchdowns. They'd have been 5/5 if you counted Howard's 20-yard TD reception as a red zone score, which the NFL apparently does not.

4) The 'You'll Get Nothing and Like It' Award: Opposing lead running backs

Say what you will about the Eagles' defense, but at least they stop the run. Soooooo, that's something? Here's what they've done against lead backs this year:

The Eagles' stellar play against the run caused the Packers to try to throw four consecutive times from the Eagles' one-yard line, and they couldn't get in. We'll have a lot more on that goal line stand at some point in the next few days. That was too big of a moment not to get it's own article.

5) The 'You'll Get Everything and Like It Award: Opposing wide receivers

Here is what opposing "No. 1 receivers" have done against the Eagles this year:

Jalen Ramsey would probably help that a little. Just sayin'.

On the Packers' first offensive play of the night, Aaron Rodgers dumped a pass off to running back Jamaal Williams. He was stood up and driven back by Nigel Bradham, with several other Eagles ensuring he wasn't going anywhere. Whistle or no whistle, the play was clearly over. With Williams completely defenseless, Barnett, with a full head of steam, laid a vicious helmet-to-helmet shot on Williams, who went down like he was knocked out before he hit the ground.

From a football IQ standpoint, the hit was idiotic, and it immediately drew several flags. From a "maybe try not to injure another player" standpoint, Barnett's hit was reckless, and in my view, deserving of an ejection. For sure, Barnett will be fined.

Barnett's hit also changed the scope of the drive thereafter. Instead of a 2nd and 10 from deep in their own end, the Packers had breathing room and a new set of downs. On first down, they got nine yards, and were emboldened to take a deep shot on 2nd and 1, which Aaron Rodgers completed to Davante Adams for a 58-yard gain.

Of course, the Eagles were fortunate that Barnett was allowed to stay in the game. With under two minutes left in the first half, the Packers tried to block Barnett with a tight end, and that didn't go so well.

Barnett's strip sack against the Packers was reminiscent of the one he had against the Vikings in the NFC Championship Game.

In the locker room after the game, Barnett was asked about his sack, and Fletcher Cox, sitting nearby, chimed in, "It's a fine if you get blocked by a tight end."

It doesn't matter whether Sendejo hit Maddox or whether he would have hit the receiver  this is absolutely reckless, and it is the type of hit the NFL has rightly been trying to get out of the game for years.

Andrew Sendejo lit up his own teammate, Avonte Maddox! Listen to the hit! SHEESH! pic.twitter.com/suv5qrat9q

There's no excuse. You can't lead with your head against defenseless players. Sendejo probably won't be fined because he hit his own teammate, but he probably should be.

8) The 'Get Well Soon' Award: Avonte Maddox and Jamaal Williams

After the aforementioned hit on Maddox, I've never seen so many medical people immediately run out onto the field, and from both sidelines. Maddox was on the ground for quite a while, and eventually, the entire Eagles' roster had left the bench and was out on the field in concern for him.

Both Maddox and Williams had to leave on stretchers, and in both cases the phrase, "He has movement in his extremities" had to be used. What a brutal game.

After dropping an interception earlier in the game that would have almost certainly been a pick-6, Bradham sealed the win with a pick of Rodgers that was deflected into the air by Craig James, who was forced to play due to injuries to Maddox and Sidney Jones.

Nigel, as always, your curtain call.

The Eagles will get three extra days of rest before they face their next opponent. Of course, we'll go through the usual drill of seeing how bad the injuries from this game are, but the Eagles should be getting some firepower back, most notably DeSean Jackson.

The Eagles will face the Jets on October 6, and it's highly likely they'll be double-digit favorites.