The Philadelphia Eagles lost another football game. Against one of the most fun teams to watch in the NFL, they managed to make it boring, as always. The final score doesn't really matter, but for the sake of posterity, they lost 23-17 in a game that wasn't that close.

Over the weekend leading up to this game, there was a lot of scuttlebutt that Jalen Hurts was going to see an increased role in the offense. He got two non-consecutive snaps. lol. But on one of them Carson Wentz didn't line up at wide receiver, so it was different!

On one of his snaps, Hurts completed a pass to Alshon Jeffery, and then immediately came off the field so that Carson Wentz could get sacked on 3rd and 8.

Another week, another bad Wentz performance. Twice Wentz missed a wide open Dallas Goedert deep down the field on what could have been touchdowns with better throws. Additionally, on a key fourth down late in the game, Wentz threw a pass directly to the Seahawks' Quandre Diggs. I look forward to hearing Dan Orlovsky explain why that was someone else's fault.

Wentz needs a few more fumbles down the stretch to win a "Triple Frown."

Come on Carson! You can do it! pic.twitter.com/7Z4GzlnONC

3) The 'Abandonment' Award: The run game

The Eagles ran it with their backs just nine times, which, whatever. They had 28 rushing yards. They could have run it more, maybe? I don't know. Who cares?

4) The 'Are You Trying To Get Fired' Award: Doug Pederson

Alshon Jeffery runs, what, a 5.2 40 these days? He's cooked. I see it. You see. My eight year old daughter sees it. Somehow Doug Pederson doesn't see it. Jeffery played as many snaps as Travis Fulgham in this game, and was quite often on the field while Fulgham was on the sidelines.

That is really just unreal. Fulgham has been one of the truly rare bright spots this season, and he's riding the bench while Jeffery gives precisely zero f***s? I don't even blame Alshon at this point. Pederson (or whoever is responsible for Jeffery being on the field) has to be trying to get fired. There's really no other logical explanation. Doug is going to show up in a bodysuit and drag the Lombardi Trophy around the NovaCare Complex on Tuesday.

DK Metcalf had a day: 10 catches, 177 yards, most of which were over Darius Slay, who got outmuscled by Metcalf all night. Apparently, Jim Schwartz pissed off Metcalf during pre-game warmups.

DK says Eagles DC jim schwartz came up to him and said "I was in Detroit with Megatron, you're not there yet." It put a chip on DK's shoulder.

That was probably a bad idea.

6) The 'Not Their Fault' Award: The defense

The Slay-Metcalf matchup aside, the Eagles' defense had a good night against an explosive Seahawks offense led by a top 3 quarterback in Russell Wilson. They also had a nice collective performance last Sunday against the Browns.

Again... does anyone care?

7) The 'Ownership' Award: The Seahawks, of the Eagles

The Eagles have faced the Seahawks seven times in the last decade. They're now 0-7 against them during that span.

8) The 'Ninth Circle of Hell' Award: The Eagles' place in the NFC East

The Eagles got passed in the standings by the Giants and Football Team this week. Only the Cowboys are behind the Birds now in the NFC East, which is probably the worst division in NFL history. The Football Team and Cowboys were on their third and fourth quarterbacks, respectively, at various points this season, while the Giants could be riding with their backup for a while.

Their NFC East title chances are now down to +250, third in the division (New York is +200, Washington is +210) according to TheLines.com's consensus odds.

Even before these teams lost their starting quarterbacks, they were trash. The chances of the Eagles finishing dead last in this unbelievably awful division remain quite high, as they still have three upcoming games against the Packers, Saints, and Cardinals.

Finishing last in the NFC East is like being in the Ninth Circle of Hell.

Prior to this week's slate of games, the Eagles were ninth in the draft order. With their loss to the Seahawks, they're now sixth, after leapfrogging the Falcons, Giants, and the Dolphins' pick originally owned by the Texans. 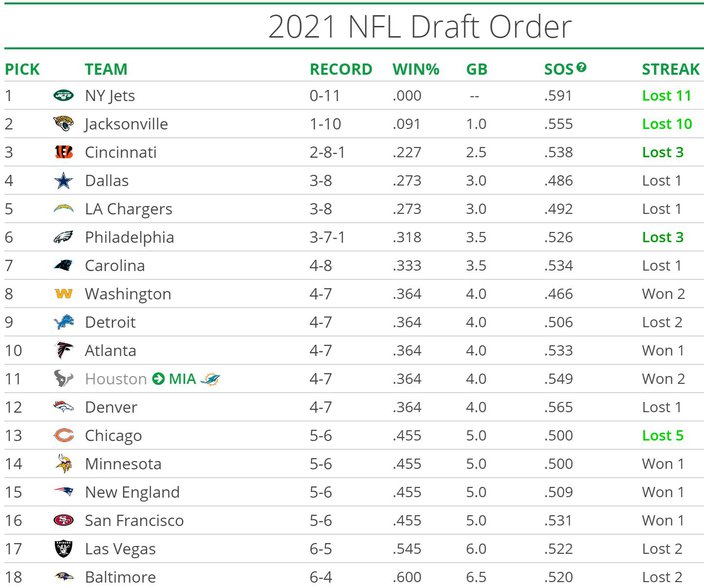 They can realistically get as high as the third overall pick by the time this season is over.

On Monday morning, we laid out why the Eagles should blow it up at the conclusion of this season. It's really the only logical thing to do. This team deserves a complete teardown, and the scary part is that we probably haven't seen rock bottom yet.