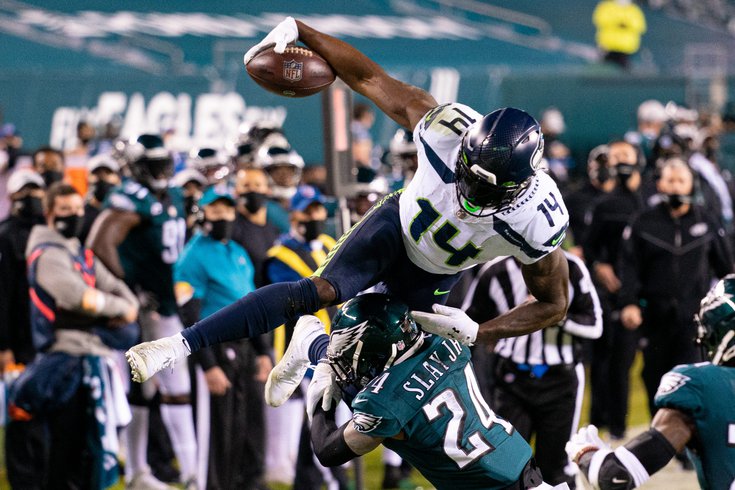 The Eagles took the field for Monday Night Football and laid another big, steaming dump on the logo at midfield, losing 23-17 to a Seahawks team that didn't play particularly well. With Jeffery Lurie already fuming about this season, the only question now is whether major changes could be coming sooner rather than later.

• It took long enough for the Eagles to finally go back to him, but wouldn't you know it, Jordan Mailata looked pretty damn good at left tackle in a development that shouldn't surprise anybody. Had the coaching staff let him stay there instead of forcing Jason Peters back into his customary spot on the line, they would have gotten him even more valuable playing time than he has already gotten this season.

In any case, their patience with a guy who has been a longtime project for the organization seems to finally be paying off.

• Congratulations to Javon Hargrave for finally deciding to show up for this season. A bit late compared to the rest of his guys on the defensive line, but the unit as a whole has been pretty great, so Hargrave breaking out feels like a nice bonus at this point.

In fact, let me say something nice before skewering this football team — the defense as a whole did its damn job tonight. Yes, Darius Slay was on the receiving end of some dominant play from DK Metcalf, but outside of that matchup, the Eagles kept the Seahawks from getting a whole lot going. Russell Wilson only started to do damage with his legs in the fourth quarter, and even that was subdued compared to some of the backbreaking runs he has produced against the Eagles late in games over the years.

Slowing down this Seahawks team is a decent accomplishment this season, and with an even semi-competent offense, Philadelphia would have been right in the mix to win this one. But, you know, the offense being competent is sort of the whole problem with the team.

• This Eagles season is getting closer to ending, and it appears they might get their hands on a high draft pick at the end of it. That's a victory, I think.

• It's hard to understand what the Eagles are doing (or at least think they're doing) on offense most of the time. Am I supposed to blame Doug Pederson or the army of assistants around him? Let's just say it's Pederson for the sake of this exercise.

There are basic misplays every single week. Here's an easy one to point out for even the most amateur football mind — when you're in a third-and-long situation on your opponent's half of the field, a play-action fake is just something that gives the opponent more time to get to your quarterback. No team is fearful of a third-down draw from that distance and spot on the field. Yet that's something the Eagles do pretty routinely, and the current results are proof of how fruitless the exercise is.

Then again, a bigger problem is that guys on offense don't seem to know what the heck they're supposed to do. On Philadelphia's opening drive of the second half, it appeared they had designed a screen on an important third-down play in Seattle territory. Someone forgot to tell whoever was supposed to catch the screen pass:

Wentz looking for his screen WR. His screen WR had other ideas. pic.twitter.com/6dRblBKtPH

Carson Wentz is the guy who ends up looking bad on the play for not making a decision before being dragged to the turf, but in this case, someone has to actually be in the spot they're supposed to be in. That's the most basic ask you could have/make of an offensive skill position player. It is easy to blame Jalen Reagor specifically for this, but it has been a problem all year, a teamwide failure the staff has to answer for. Reagor screwing up this play does not explain how many different versions of this mistake we've seen across 11 games.

It's not asking a lot for guys to at least understand the damn play. No one is expecting this group to be The Greatest Show on Turf or the Montana-Rice 49ers. If there's a change made for this football team, at this point, it would not shock me if it was at head coach.

• While we're on the management side of things, I'm not exactly unearthing new info here, but DK Metcalf is a hell of a football player, and a great example of Howie Roseman's shortcomings as a talent evaluator. He's a reactive GM rather than someone who stays ahead of the curve and analyzes each individual class on its own merits.

The Eagles are always chasing some sort of ultra-specific player type under Roseman. When they focus on ultra-productive players from college, they ignore the guys with measurables who are about to break out at the next level (e.g. Metcalf). When they focus on guys with tools, they miss on the ultra-productive college players who are going to excel at the next level (see: Jefferson, Justin). Roseman obsesses over the past error and it creates a second future error, and then the cycle begins anew. Reagor is a speed guy whose speed has not shown up since perhaps the very first game of the year.

(Hell, you could argue the Jalen Hurts pick is an extension of this poor drafting philosophy. QB depth has been a huge need for Philly in the past, but was it urgent to the point that you spend a second-round pick on another QB, ignoring other positions of need for a guy who to this point has been a gadget player?)

It's a bad way to manage a football team, and when you add on that they've been far too reluctant to let go of particular veterans and turn talent over, it's a toxic blend. And with Roseman as the longest standing member of this trainwreck, there's a pretty easy argument that he deserves the most blame and the swiftest push to the exit of anybody in power with the organization.

• I saw some people on social media getting excited or at least trying to dress up the beginning of Wentz's second half with framing like, "He's building momentum!" Respectfully, I have to ask what game you're watching, what sport you're watching, and what your football consumption habits are outside of the Eagles. Stringing together a series of passes that don't go further than seven yards down the field is not winning football, and if an NFC East rival tried to sustain an offense the way Philadelphia did on Monday Night Football, everyone in this town would mock them relentlessly.

This is not a misprint: through three quarters of football, Carson Wentz averaged 3.5 yards per attempt. That number only climbed to about 3.8 by the time the final whistle was blown. The Eagles' downfield offense was basically non-existent, which makes it extremely difficult to fool defenses pre-snap. You might be able to string together a bunch of short completions if you're lucky, but you have to execute just about perfectly, and it's also harder to run the ball with defenses playing closer to the line of scrimmage and daring you to beat them over the top.

It's not all on Wentz — receivers have to get open down the field more to get the ball there — but he also missed opportunities when guys did break open down the field, including a rare burst from Alshon Jeffery down the sideline in the second half. It's the perfect storm of suck. An interception thrown to no one in particular felt like a fitting way to really drive home how meaningless even his good stretches have been, and certainly how meaningless they were on Monday.

.@qdiggs6 was RIGHT. THERE. for the interception on fourth down!

Nothing about how this team is being run suggests confidence in the guy behind center. They're conservative and predictable schematically, and even their shots downfield/attempts at aggression feel pre-determined. Even when those shots come, they're never in the right spot, badly underthrown or overthrown. Once you're in that territory, it doesn't matter whether you decide to stand behind the QB or not, you are effectively dead as a unit.

It felt perfect that Wentz's only big downfield play came on a prayer down the field in garbage time. You can't fool me with the window dressing anymore.

• I think Darius Slay has had his moments this year, but they certainly did not trade for him so that he could get absolutely torched by the opponent's best wide receiver all night long in primetime. This is supposed to be the guy who slows down the top option so you can force the secondary players to beat you, and instead, we were treated to a 60-minute beatdown at the hands of DK Metcalf.

In years past, there have been times where I thought the secondary wore too much blame for pass defense struggles when the defensive line simply could not get to the quarterback. Tough to make the case this season, when the line play has been as good as it has this year.

• When you get to the point where other active NFL players are perplexed by the excuses being made for you, perhaps you're in a bad place:

On the other hand, maybe a guy on a team who clearly did not do a good job with safety protocols (and with their own QB crashing back down to earth) would do well to just keep it to himself and the group chat next time.

• I want to make sure this gets in the final review despite us talking about it in the first half — in no way, shape, or form is this acceptable.

Here's Jalen Reagor with his hand up pre-snap because no one on Seattle is covering him. Wentz threw elsewhere (incomplete). pic.twitter.com/oMzy9LFXFD

You want to give him some leniency for taking sacks in a pocket that crumbles routinely? Fine. You want to point out that they've put Alshon Jeffery back in the mix at the cost of snaps for Travis Fulgham, someone Wentz showed legit chemistry with? Fine. But he can't miss opportunities like these.

• Should Doug Pederson have kicked the field goal they were in position for midway through the fourth quarter? I can see the argument for it, but I'm less mad about that one than a lot of other people seem to be. I have more confidence in them converting a fourth and manageable in that spot than I do in them leading another touchdown drive with the clock running down and one timeout and then scoring a two-point conversion on top of that just to tie it.

• I'll say it for what feels like the 50th time — if Alshon Jeffery continues to play over Travis Fulgham, someone should lose their job. There's no acceptable explanation for it and it's embarrassing to see them die on this hill.