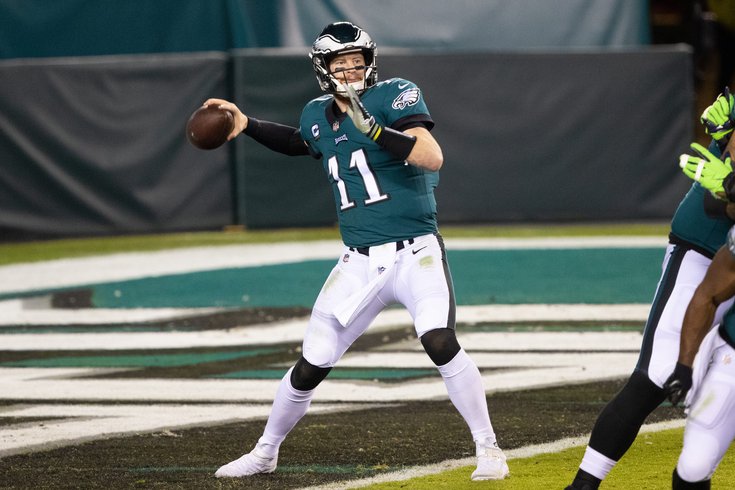 Philadelphia Eagles quarterback Carson Wentz passes the ball against the Seattle Seahawks during the first quarter.

The Eagles stunk yet again in another first half, and the Seahawks have a 14-6 lead on Monday Night Football. The only drama left is whether Doug Pederson benches Carson Wentz and rips off the band-aid to save us all from this agony.

• The discipline on defense was not there early, but the Eagles certainly tightened up once Seattle got close to the goal line on their opening possession. Hard to know what exactly the Seahawks were thinking not throwing it to one of the best red-zone weapons in the league, but kudos to the defensive front anyway.

Philadelphia's standout play came on the fourth down drive killer, with Derek Barnett and Javon Hargrave combining to burst through the line and prevent Seattle from getting six points — which frankly would have felt pretty demoralizing after how impotent the offense looked on their first possession:

We've been saying it a lot this year, but the defensive line has been the team's best unit by a mile, and they continued to do their part early on Monday night.

• It appears Mr. Barnett wanted to make sure he got at least two bullet points tonight. On Seattle's second fourth-down attempt of the first quarter, Russell Wilson thought he had a brief window to burst through the line and pick up a first down. Barnett kept his eyes on the quarterback even while using a spin move to get free, and he blew the attempt up before Wilson got anywhere close to the first-down marker.

Between Josh Sweat's emergence, some more consistency from Barnett, and another high-level year from Brandon Graham, these guys are the only thing standing between the Eagles and a complete collapse.

• Here's an obligatory sentence about Dallas Goedert's touchdown as the half came to a close. That's about all this offense deserves.

• The Eagles had the ball for less than 20 seconds on the opening drive. The only yards they gained were on the five yards Seattle gave them with an offsides penalty on first down.

It didn't get a whole lot better from there. The Eagles managed to go three-and-out on their first four drives of the game, each one with a new theme. Philadelphia's second drive featured two minimal-gain runs and a throw down the sideline to Jalen Reagor, who couldn't create any separation and was probably interfered with as he went to make the catch. Philadelphia's third drive of the game featured a bad miss from Carson Wentz, who underthrew Goedert on what otherwise would have been a huge play down the field.

This group stinks right now, and there's no one who can hide from the blame. The GM made a bunch of poor personnel decisions to put them here, the coaching staff is doing nothing to scheme guys open, and the quarterback has sucked for a lot of this year. When will it end, when will some new blood get added to the mix?

• I have to dwell on the quarterback for a moment: the Eagles managed just four yards through the air in the first quarter. Not 44, not 104. Four total yards passing in a football game played during the year 2020. It is almost impossible to be that bad with modern rules and offenses structured the way they are. A whopping 25 percent of their yardage total came on a one-yard completion as the clock ran out in the quarter.

Again, everything that has gone wrong is not his fault. But broadly speaking, he's hurting more than he's helping. He missed an open Greg Ward on an RPO in the first quarter, he had the big miss to Goedert later on, and no one (including some of his own teammates, it seems) has confidence he's going to dig them out of this hole. He is so far gone mentally that he can't see what's about to happen even when his teammates make it ridiculously obvious for him:

Here's Jalen Reagor with his hand up pre-snap because no one on Seattle is covering him. Wentz threw elsewhere (incomplete). pic.twitter.com/oMzy9LFXFD

To add insult to injury, after Jalen Hurts completed a pass on second down to open the second quarter, Wentz came in to take a sack as he deliberated in the pocket. Doug Pederson's gutless choice to use half measures for their glaring quarterback problem is inviting even more scrutiny on a guy who is already getting crushed by fans and media alike right now. It's a terrible situation.

• Doubling down on that last paragraph, Doug Pederson's handling of this situation at QB is an absolute joke. If you are going to stand by Wentz, which I think they should not do given what we've seen to this point, at least do it wholeheartedly.

You're not helping anyone, especially the quarterbacks, trying this gimmicky nonsense where you play Musical Chairs at the most important offensive position within the same series. No one has a chance to build any rhythm or establish any continuity with their offensive unit. The line has to listen for a new cadence, the wide receivers are catching a different sort of ball thrown their way, and the only people who don't seem to get this are Philadelphia's decision-makers.

Sh** or get off of the pot already. Seriously. It's bad enough watching this lifeless corpse of a football team, you don't have to overcomplicate it on top of that.

• I don't like to distill these things down to one individual moment, and the defense isn't really the unit that should wear the blame for this team, but this feels like a "somebody is getting fired" type of play:

One team was out there with something to play for in the first 30 minutes of this game, and it wasn't the Eagles.

• Jake Elliott has been pretty brutal since signing a long-term extension, good thing they basically can't have any competition at the position until 2022.

• Alshon Jeffery lining up as a starter with Reagor on the outside is absolutely ridiculous. I have to go through this every half, every week, but they are gaining nothing from playing Jeffery over Travis Fulgham. Seniority means absolutely nothing on this team, play the guys who are actually making a positive impact and might develop for the future.

The funniest part about the Eagles' playing time philosophy is that they can't even seem to apply it consistently. When it was time for Jason Peters to get his snaps after returning from injury, Jordan Mailata was allegedly going to gain something from watching from the sidelines. Heaven forbid they apply that same logic to Wentz, who has been one of the worst players on the entire team, to see if Wentz can gain something from time on the bench while Hurts gets a chance to play. That would make too much sense.

• There's nothing wrong with trying to show some fight (quite literally) with the state this team is in. Darius Slay mixing it up with DK Metcalf is alright in my book because somebody on this team has to show a little life.

Taking an unsportsmanlike penalty after officials had given you plenty of rope to work with in an on-field tussle? That's a different story. Slay ruined what would have been a third-and-long for Seattle and gave them a first down in the red zone, which Malik Jackson then compounded with an unsportsmanlike penalty of his own, a late shove of Metcalf that a Pee Wee ref could have identified.

This is an undisciplined team that apparently thinks stupidity and aggression are a substitute for good football, and it doesn't reflect well on the coaching staff. Though I suppose if someone on the offense decided to do something like this, it could be a cause for celebration, so maybe I shouldn't be so harsh.

• If you ever want an idea of where a team stands in the league, watch how the league officiates 50/50 calls they're involved in. The Eagles don't get almost any, because they are not a team anyone respects. Officials want to call games fair but they do not want to bail you out, and unfortunately, that's the only way this group is going to gain yards and score points right now.

Is that right? Of course not, get the calls right regardless. But that's how it tends to work across professional sports.

I wrote all this, and then Wentz got away with an intentional grounding that a Seahawks assistant caught on the sideline before it reached the line of scrimmage. Maybe this crew just blows. Look at this!