The pop star may have been on his way to New York City, where he performed on 'The Today Show' 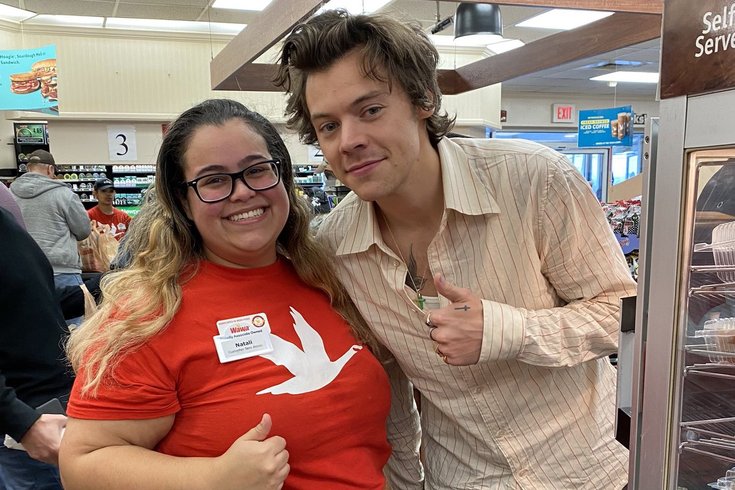 One Direction star Harry Styles, 26, surprised Natali Maldanado, 21, when he stopped by the Wawa she works at in Bear, Delaware. Maldanado, a longtime fan, posted pictures of her Harry sighting on Twitter, where they quickly circulated.

One Direction star Harry Styles stopped by a Wawa in Bear, Delaware on Tuesday. And an excited fan just happened to be working there.

Styles' appearance surprised Wawa employee Natali Maldanado, 21, who posted pictures of the musician on Twitter. The photos quickly circulated among both Styles and Wawa fans, who were excited about the two worlds colliding.

"It was a dream come true since I’ve been a HUGE fan of him (and One Direction) for almost 10 years!" Maldanado wrote in a message to PhillyVoice. "And he was such a gentleman and so loving and caring too!"

Finna get this baby tattooed on me🤪 (I didn’t have a piece of paper so I just used a wawa burrito bag😂😂) pic.twitter.com/KK8KKzBPeP

Another person posted an alleged receipt of Styles' Wawa purchase. A turkey sandwich among the items listed, though the pop star has supported veganism.

It's not clear why Styles was in Delaware, but the 26-year-old may have been on his way to New York City, where he performed on "The Today Show" on Wednesday morning.

One of Styles' security guards also appeared in photos from the Wawa sighting. After being robbed at knifepoint in London last week, Styles hired a new security guard that has worked for Mick Jagger.