With an eye-catching message, he hits the streets in pursuit of drug money 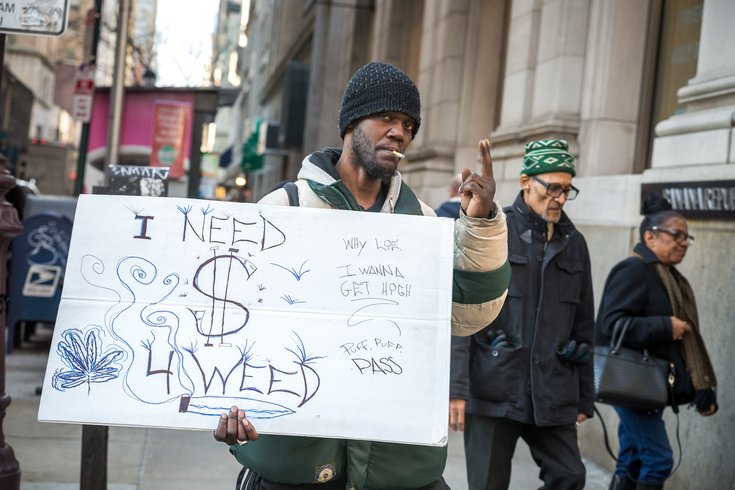 Amid the signs designed to draw attention from passersby willing to share money with the less fortunate, his is among the most eye-catching Philadelphia has to offer.

A man who would hold such a sign in Center City is worthy of further investigation. I first saw him near the food trucks under the Clothespin on Tuesday morning where he told me, “I could lie and say I’m hungry, but I won’t be hungry till I smoke some weed.”

That admission was worth a $1 donation to his mission.

A few hours later, we caught up at Broad and Walnut to talk a bit about what led to his message of stark honesty.

He said a simple YouTube search would confirm this. It did. Here are a couple highlights:

Z Man used to play drums on Philly streets – back when the Wawa was a Robinson’s Luggage and the Walgreen’s was a Borders book store – with a fellow named Tony Jams Pots N Pans. They lost touch over the years, though, when Tony Jam moved.

“All we used to do is smoke weed. We were weedaholics,” admitted Z Man, who said he smoked his first joint at the age of eight. “He went to Boston when he had kids. We used to drum every-f******-where.”

In that respect, he’s on his own. In others, he doesn’t have to be, but said he chooses to.

He didn’t delve more deeply into those familial strains, but he discussed the judgment passed by a minority of passersby who take it upon themselves to lecture him about his life choices.

“If I was holding a sign that said ‘I need money for cigarettes,’ I’d be dead after a week." – Z Man Pots N Pans

“’Yo, you need to get a job and marijuana is bad for you’ is what one guy said to me. He was smoking a cigarette,” Z Man Pots N Pans shared. “Cigarettes kill a lot more people than the blunt I was smoking proudly.

“If I was holding a sign that said ‘I need money for cigarettes,’ I’d be dead after a week. Marijuana never killed anybody.”

Overall, he said the reactions are more positive than negative, with some people even stopping to chat for a minute. One man told him about the diabetes he suffered. They discussed how the ailment was probably a result of dietary choices.

“Sugar did that to you. You can’t even eat what you want to now,” he noted. “Marijuana never gave anybody diabetes.”

He also noted that police officers who see him out with his Money 4 Weed sign treat him with respect. He chalked it up to them respecting his First Amendment rights.

At that point, he noted that he had to go over across the street to pick up “some munchies and a $5 soda.” The munchies were hitting, you see.

The day’s take must not have been too good thus far, though.