Why Philadelphia is ground zero for Team Clinton

If it feels like Hillary Clinton or one of her allies is campaigning somewhere in the Philadelphia region every few days, well, that's because they are.

Visits over the weekend by Sen. Bernie Sanders and Anne Holton — the wife of vice presidential candidate Tim Kaine — marked the 11th occasion Clinton or a high-ranking Democrat has stumped in Southeastern Pennsylvania since Labor Day. And that doesn't include Bill Clinton hobnobbing at the Made in America Festival, either.

Dating back to the Democratic National Convention, that group has combined to visit the Philly area 14 times. And that figure only grows when you count the myriad other supporters – like actress Elizabeth Banks and the Rev. Jesse Jackson – who the Clinton campaign has sent Philadelphia's way.

With the largest states, like California and Texas, leaning heavily toward one candidate, sizable states like Pennsylvania, Ohio and Florida, where the races are much closer, become key battlegrounds.

To those familiar with presidential politics, that's hardly news. Republicans have not won Pennsylvania since 1988. But many experts believe the Keystone State could be a tipping point in the 2016 election, if not an essential state for Trump.

"There's going to be a lot of discussion about whether or not Pennsylvania is a swing state after this election, but the perception is there," said Wesley Leckrone, associate political science professor at Widener University. "These polls come out and show very close races. In the macro picture, it's the size of our state and the seeming swing of the state that makes us important."

Even though Trump has no chance of winning Philadelphia, the city and its surrounding suburbs remain an essential part of the equation to both campaigns, Leckrone said. The region accounts for about one-third of Pennsylvania's voters.

Clinton needs a strong Democratic turnout in Philadelphia and its surrounding suburbs, which have slowly shifted Democratic over the years. Trump can lose the region, but he can't get walloped. He needs to supplant the support he'll draw from the rest of the state.

Recent polls show Clinton with a big lead in the suburbs, 64 percent to 28 percent. With her 53-point lead in the city, she looks virtually unbeatable here, even if Trump is able to amass votes beyond the Philadelphia region.

"I think the important thing is whether or not the enthusiasm is there from that Obama coalition, which was made up of minority voters, college students, women and swing voters in suburbs," Leckrone said. "Will those voters show up? If (Clinton) can get a really high turnout there ... there's very little chance that Trump could make up the votes in the rest of the state to beat her." 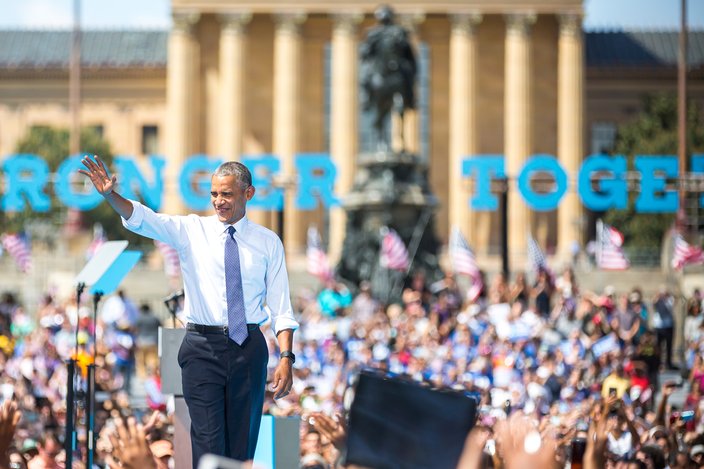 President Barack Obama waves to the crowd before his speech at a campaign event for Hillary Clinton at Eakins Oval in Philadelphia on Sept. 13, 2016.

Essentially, that's why Clinton and her allies keep popping up in and around Philadelphia, particularly as Tuesday's voter registration deadline draws near. And expect those visits to continue in the last month of the campaign.

"Here in Pennsylvania, our campaign is running as though we're 10 points behind, taking absolutely nothing for granted," wrote Corey Dukes, Hillary for Pennsylvania state director, in a recent memo. "For months, the coordinated campaign has been organizing both online and on the ground."

The Clinton campaign has opened 56 campaign offices in Pennsylvania, including nearly two dozen in the Philadelphia region. About 15,000 volunteers have assisted the campaign, which has emphasized voter registration drives.

The latest polls show Clinton in the lead here.

"We are focused on continuing to register tens of thousands of voters and mobilize our supporters to help Clinton win Pennsylvania and to stop Trump from ever getting close to the White House," Dukes said in a statement Friday.

The Trump campaign did not immediately respond to a request for comment.