Most of its Philly bookings for convention-time are coming from Washington, D.C., Airbnb says 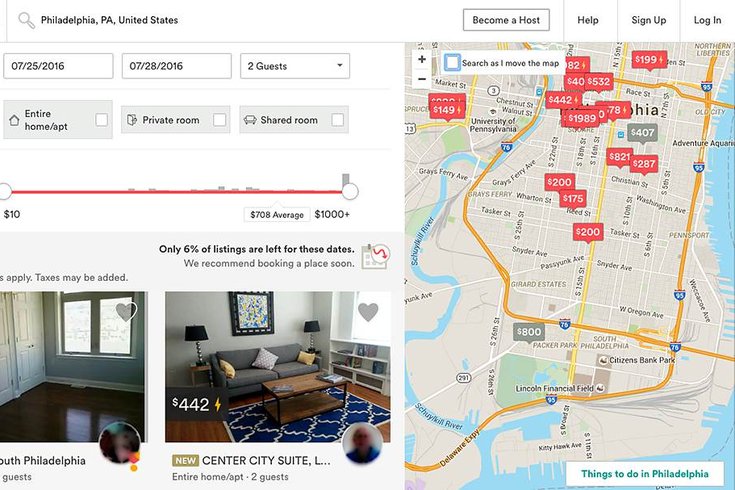 A search of available Airbnb listings in Philadelphia for the week of the Democratic National Convention shows 94 percent of accommodations are booked.

Philadelphia is one of the largest cities in America, with 16,000 hotel rooms, but for next week's Democratic National Convention, that won’t be enough.

In addition to the nearly 5,000 delegates, the city is welcoming 35,000 to 50,000 ancillary visitors – from businesses, lobbyists and associations, etc. – and 15,000 media personnel. Many of those visitors have turned to Airbnb, the online marketplace that connects residents looking to rent their apartments or homes with people who are looking for accommodations.

Nothing says “a home away from home” like another person’s home.

Airbnb projects an additional 4,000 guest arrivals for reservations in Philly during the DNC, and as of Friday about 94 percent of the available listing in Philadelphia were already booked up. Many rentals were booked weeks and months ago.

The largest proportion of guests are coming from Washington, D.C., according to statistics Airbnb shared with PhillyVoice. High numbers of Airbnb customers are coming to Philadelphia from liberal strongholds like New York, Chicago, Los Angeles, San Francisco, Boston, Austin and Seattle.

With room rates at many city hotels north of $500 per night, Airbnb was a more affordable option for many. The median price for an Airbnb rental was about $100 per night, the company said. On Friday, the average price of Philadelphia listings not yet booked was $708 per night.

The DNC estimates that the convention will add $250 million to $300 million to the Philadelphia economy, and Airbnb renters are just one contributor. Typical hosts, many of whom are just trying to earn some extra cash, will earn more than $700 from DNC-related reservations.

According to a study of 2,000 consumers by Bloomberg, the most common income bracket to use a peer-to-peer lodging experience, like Airbnb, is from $70,000 to $120,000 annually.

Airbnb isn’t the only home-sharing service benefitting from the DNC.

HomeAway, which offers whole-home properties, usually second homes or vacation homes, said it has more than 75 percent of its 300 offerings booked during the DNC.

“The demand for properties to book this year so far as compared to the same time last year has grown about 25 percent in Philadelphia, surely due to the fact that this event is drawing so many people in,” said Adam Annen, public relations manager for HomeAway.

The average price per night in Philadelphia for HomeAway properties is usually $266, but during the DNC that average nightly price has skyrocketed to nearly $750.

Neither the DNC, nor Airbnb and HomeAway, can say who is renting all those accommodations.

But while the DNC has put up painted donkeys all around town, the convention looks to be one big cash cow for city residents renting their properties on Airbnb and HomeAway.