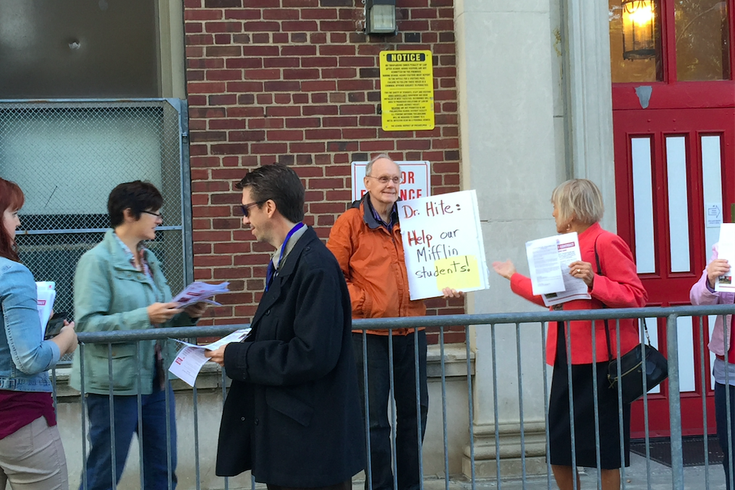 Members of the East Falls community and teachers at the Thomas Mifflin School staged a 'walk-in' event on Thursday, Oct. 6, 2016 in the hopes of convincing the school district to send a new teacher over to help address overcrowded classrooms inside.

Another day of teaching and learning was about to get underway at the Thomas Mifflin School in East Falls.

As parents walked or drove up to the building at Conrad Street and Midvale Avenue between 8 and 8:30 a.m. Thursday, they were greeted by a small collection of teachers, and locals who support their efforts through the Friends of Mifflin School group.

That welcoming committee had flyers in their hands and a message on their minds for their “walk-in” event: Please tell the school district that forcing first- and second-graders to share a classroom for the rest of the academic year is not an acceptable response to funding woes and teacher shortages.

“This is NOT what our students deserve!” read those flyers, which are part of a “national day of action to reclaim our public schools” effort. “They deserve to stay in their classrooms with their classes/teachers, and with low/contractual class sizes.”

“’In first grade, you're learning to read. In second grade, you're reading to learn. ... We'll just have to grin and bear it if they don't send a new teacher.” – Nate Monahan, second grade teacher, Thomas Mifflin School

It’s “leveling” season in Philadelphia’s public schools, which means classes and teacher assignments are readjusted according to student populations and demands. At Mifflin – where teachers say 240 students were expected but roughly 300 enrolled – that’s brought about “an oversized classroom of 30+ kids” in one third-grade class.

Those third graders currently learn in the school's biggest room. There, desks are several desks are off to the side, pushed against the walls, amid limited space to move around.

The staff thinks the district should bring another third-grade teacher in to alleviate a class size that exceeds the upper limit of the teachers’ contract.

If that doesn’t happen, principal Leslie Mason could be forced to reassign one of four 1st and 2nd grade teachers to 3rd grade duties. That would require creating a 1st/2nd grade split classroom – and dealing with the awkward results.

To avoid that – which other schools have thanks to parental pushback and community support – they’re urging parents to barrage Superintendent William Hite with calls, emails and appointment requests before it’s too late.

Should he assign a new third-grade teacher, the problem would essentially disappear, but things aren’t as simple as a single $45,000 hire or reassignment.

In East Falls, many parents can send their children to nearby charter or private schools instead of the Mifflin catchment option. My family is one of them; our decision was based – in part – on avoiding this exact type of scenario, even as the school finds commendable footing under Mason’s leadership. We can afford to do that, but many cannot.

Caring about the neighborhood school is one thing; rallying to its defense is something altogether different without a personal investment. The Friends of Mifflin Group has built bridges that previously didn’t exist, but the protests can feel somewhat distant amid the neighborhood’s fractured educational makeup.

The lack of a contract between the district and the PFT is cited as an underlying cause for the overcrowding – and the reason Novrit works a second job delivering groceries when not teaching – but that wasn’t her point.

She was there to let others know that some city classrooms have 35 students when there should contractually be no more than 30. Should the proposed shift take hold at Mifflin, the affected classes would essentially “have to start over” despite being in a good educational rhythm one month into the school year.

“This is just a move to save some money. They lowballed us on the (student-population) projections,” said Novrit, who would have to add more than 10 new students to her current 23-pupil roster if things break badly. “The reality is that the district has problems. Everybody knows that.

“We have fabulous teachers, and our principal is doing wonderful things here that few people hear about. Unfortunately, all (some locals) know about us is when something like this happens.”

With Novrit was Nate Monahan, a second-grade teacher at Mifflin who moved to East Falls about five years ago.

After leaving a banking career to teach and “better my community,” he asked a professor in his Chestnut Hill College graduate program whether he should leave North Philadelphia’s Paul L. Dunbar for Mifflin.

“You don’t want to go to Mifflin,” he recalled of the response.

Monahan went anyway, after being impressed by staffers who interviewed him and shared an educational “ideology that was right up my alley.”

“’It takes a village,’ that resonates with me. I love living in the neighborhood where I teach,” said Monahan whose current 21-student class is a great size, but adding 10 new students would cramp already limited classroom space and force him to readjust his overall approach. “It would be awkward. Some would benefit (from the shared classrooms), but some could lose the strides they’ve made.”

Merging first- and second-graders could have some tangible drawbacks, he said (including, I presume, reactions like mine that held "there's no way I'd want my first-grader son crammed into a room with second graders.")

“In first grade, you’re learning to read. In second grade, you’re reading to learn,” he said. Some teachers are “up in arms about this. We’ll just have to grin and bear it unless they send a new teacher.”

And as they grin and bear it, something with an easy fix could serve to further damage an improving school’s ability to connect with a neighborhood with a lot of kids who head out of East Falls to learn.

So here’s my message to Superintendent William Hite as an East Falls resident: Give Mifflin another teacher unless you're content to watch a continually improving school stay on a gerbil wheel that never lets it garner the community support it needs to thrive.