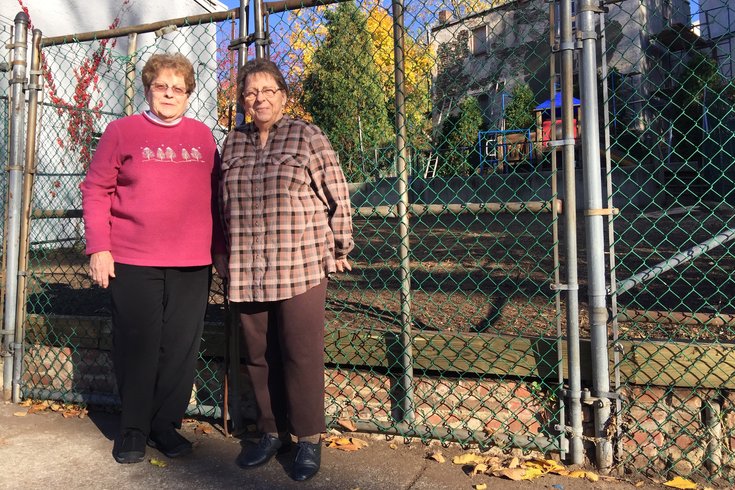 The extended Wee Care Child Care Center family has a lot to be grateful for this Thanksgiving season.

For more than three years, it found itself mired in a legal battle which – to them – defied explanation. Now that it has finalized a $70,000 property sale, the Midvale Avenue daycare facility can get to work transforming a dangerous, long-abandoned East Falls lot back into a playground.

What does that mean to the dozens of families who entrust the daytime care of their youngsters to Marion Johnson, Barbara Shaw and their staff? Parents finally know their children will soon be able to play comfortably outside during the sunlight hours.

The latest installment of the Wee Care saga starts with an agreement between the owners of the neighboring property (one of whom died last year) and a daycare center (to which the sellers had a close, decades-long relationship) in 2013.

It wound its way through courtroom wrangling in 2014 and 2015 before finally closing an official sale three weeks ago. Through it all, the price didn’t change.

Along the way, personal relationships were damaged and many families (or customers) opted to take their children (or business) to facilities that offered outdoor play areas for kids.

“There’s still a feeling like something else is going to happen, that this can’t be true." – Barbara Shaw, Wee Care Child Care Center

This happened while lawyers, realtors and neighbors tried to figure out just how the heck a simple transaction descended into legal cobwebs. They still can’t answer that, and probably never will.

Johnson and Shaw – who are sisters – have been working at the daycare center at the Falls of Schuylkill Baptist Church for decades. Today, they’re two of the church’s 10 remaining members.

There were bad times (former operators packing up in the middle of the night to the point where police found baby bottles rolling down hilly Midvale Avenue, and others who’d eat the children’s food) and good times (when they convinced the church to let them take over despite the woeful transgressions of others).

The sisters, who worked there all along, recall renting that neighboring lot along Midvale Avenue for more than three decades from property owners Christina Alvarez and Ernst Hohmann.

Alvarez and Hohmann lived in the historic Hohenadel Mansion, located behind the day care on Indian Queen Lane.

The couple also owned a pair of lots facing Midvale, and sent children to the daycare, forging a “pretty close” personal relationship through the years.

The sisters recall Hohmann, now deceased, telling them that “I’d give you the playground for nothing.” When Wee Care had problems with its water, Hohmann ran a hose from the house to the center out of the kindness of his heart. The ladies went country line dancing together.

The playground was initially rent-free, a trade-off for daycare services. Over the years, rent would become a necessity. It started at $600-a-month before jumping to $800, $1,000 and, finally, $1,200, the sisters recalled.

When the couple put their home and two Midvale lots up for sale, the daycare jumped at the opportunity to purchase the playground land.

Dean Weisgold, the attorney who represented Wee Care as the simple sale turned into a legal battle, recalled a $70,000 sale agreement being forged in February 2013. Everything seemed fine. Wee Care would soon be able to start clearing the lot and removing a dangerous tree in the middle.

Then, a week before the March 29, 2013, scheduled closing, the sellers didn’t meet their obligation to provide the title company with a survey, according to Wee Care’s realtor Carmel Archdekin. They also wouldn’t allow the buyers to pay for one themselves, she added.

When he requested mediation in the latter part of 2013, the sellers hired attorney Cheryl Furey to represent their interests. Weisgold had trouble tracking down Hohmann as he took ill.

“It turned acrimonious,” he said, noting that Alvarez wasn’t permitted to answer any questions during depositions or talk to her friends when they crossed paths. Legal sanctions ensued.

“We signed an agreement of sale. We wanted the land,” he said. “During the time this was going on, we couldn’t use the play area. It was locked. The grass grew 10-feet high. It was just a disaster.”

In 2014, a judge found in favor of Wee Care, requiring the seller to provide a survey of the land. They didn’t, per Weisgold.

The court then ordered the sellers to pay Wee Care’s legal defenses because, in Weisgold’s words, the objections “were so frivolous.”

The legal wrangling continued through 2015, when another scheduled closing went unfulfilled. An added layer of confusion came when Hohmann passed away last year, but no estate had been established.

“Every argument they could make up was total nonsense. We knocked out their stupid claims and went and got a deed prepared,” he said.

“There were no reasons given to us throughout the entire process. Maybe there’s oil or diamonds underground there.” – Carmel Archdekin, realtor

“It really wasn’t supposed to be a big deal, but all along, I heard all sorts of absurd arguments,” he said. “I really don’t understand any of their actions in the case. (My clients are the) nicest people in the world. They work for a church and want to have their kids play outside in the play area, and people on the other side were just making us miserable.”

Even the final closing featured some drama, according to Archdekin.

Furey, she said, tried to stop the proceedings, and the buyers weren’t permitted in the room for settlement, so they signed all the papers in the hallway after sitting around from 11 a.m. to 3:30 p.m.

“They fought to keep us out of that room right to the very end,” Shaw said.

“We’re all so dumbfounded,” Archdekin said. “There were no reasons given to us throughout the entire process. Maybe there’s oil or diamonds underground there.”

For her part, Furey – in a Monday conversation with PhillyVoice – said she needed her client’s permission to discuss the case.

She did mention about how litigation is “never a pleasant experience,” how “everybody thinks they’re right, but if both sides didn’t think they were right, there wouldn’t be anything to argue,” how “there are two sides to every story, and the court did what it did” and how she hopes “we don’t have to file any defamation suits (because of this story), I’m only kidding.”

Just minutes before deadline, Furey called to say she spoke with Alvarez and that, "at this point in time, comment is declined." She reiterated that she hopes this story wouldn't defame her client and her client's late husband.

Meanwhile, Weisgold put the case into his perspective.

“My clients are now owners of the land,” he said. “Now, they can finally have use of play area for kids which (they) should have had three and a half years ago.”

WHAT IT ALL MEANS

Wee Care currently watches after some 65 children, as young as three months old. One afternoon last week, while the babies were down for a nap, they sat in a cramped office and discussed what they’ve been through, and what’s to come for the lot.

Compartmentalizing any angst from the previous three years of drama, the sisters spoke warmly of Alvarez who, Shaw said, is “a very bright person; headmaster of a school in Delaware” who since moved out of the neighborhood.

The check was sitting in that office for the past three years, a time during which their pleas to cut down a tree – which ultimately crashed down onto the sidewalk a few weeks back – went unheard with no reason given.

“We couldn’t take the kids out there. There were huge branches falling. It wasn’t safe,” she said, noting that Wee Care doubled up a fence out front and moved cars out of the driveway to repurpose a limited space for outdoor play area just feet from a busy roadway. 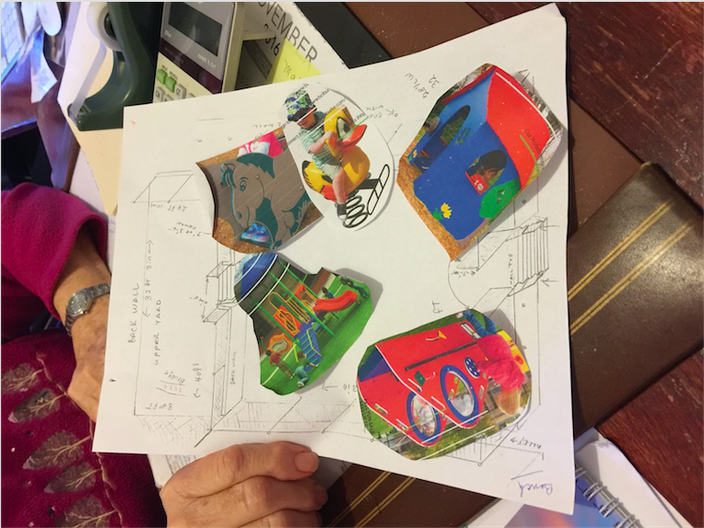 After a years-long legal battle, the Wee Care Child Care Center in East Falls can put its visions for a neighboring playground into tangible form.

On one side, they dealt with parents who wanted to know when their children would be able to go outside and play. Walking large groups of children to nearby Inn Yard Park wasn’t feasible as the roads are dangerous, some children like to run off and there are no bathroom facilities there.

“We didn’t realize anything was going on. At court, it was, ‘Oh hi, how are you doing?’ It was pleasant. We were friends,” Johnson said of their relationship with the property owners. As it dragged on, “Parents were complaining. There were many times when we just wanted to say forget it. But we’d been through too much and went through it long enough to just let it go.”

They spoke about the seller’s attorney wanting to rely on a survey from the 1920s instead of getting a new one done as required, and requests by the other side to switch judges in the middle of the process.

“Christina came in here and gave us a box of candy early on,” said Shaw, but as the proceedings progressed, “she wasn’t allowed to talk to us.”

“It does hurt. We just want to know why she didn’t want to release it,” Johnson said. “Maybe she thought the two lots could end up being storefronts like in Manayunk, but the stores down there (on Ridge Avenue in East Falls) are all struggling.”

They rue the loss of families who’d had enough of waiting and took their children, and business, to daycare centers that offer outdoor playgrounds. They couldn’t put an exact number on it, but know it happened on numerous occasions.

“There’s still a feeling like something else is going to happen, that this can’t be true,” said Shaw. “The parents are all excited. They think their kids can go out there now, but they can’t yet. That tree falling (earlier this month) destroyed everything. It’s got to be a secure area.”

The tree’s been removed, and landscapers tended to the overgrowth in the time since settlement. Next Tuesday, Wee Care is bringing farm animals to the site for the children to see.

Before it’s good to go for kids, the base needs to be repaired, cement work done, land leveled off, playground equipment secured, fencing fixed and umbrellas or another way to protect the children from the sun installed as the big tree no longer performs those duties.

The sisters are humble when it comes to the fundraising effort that was started unbeknownst to them. (“We’re old school. We don’t do fundraisers or ask people for money,” said Shaw. “But it’s nice that she did that. It will be helpful.”)

“For three years, it’s been talked about constantly,” Shaw said. “We were upset, but that’s passed now. The parents are so excited, asking us what they can do to help, bringing bagels in to celebrate the closing. But the bottom line is always: ‘When can they go outside?’”