Tyrese Maxey, Tobias Harris and others stepped up when Philly needed it with their All-Star center getting the night off. 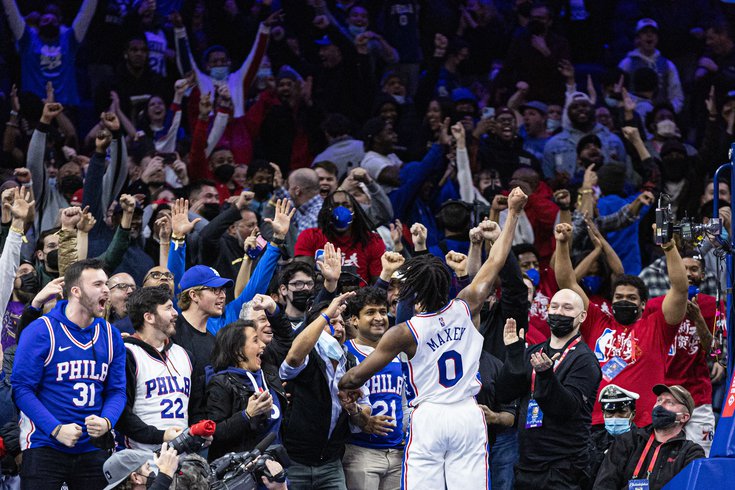 Philadelphia 76ers guard Tyrese Maxey celebrates with fans after an overtime victory against the Memphis Grizzlies.

The cost of winning one of the best Sixers games in recent memory was evident in the moments immediately following the game. Andre Drummond sat slumped in a folding chair in front of reporters, ice wrapped around his knee after playing 43 grueling minutes of basketball. Tyrese Maxey, the team's young spark plug and lead scorer against the Grizzlies, couldn't even punctuate the victory the way he wanted to as a result of fatigue.

"I wish I had enough energy to dunk it," Maxey said of his game-ending layup. "I'm not going to lie to you, I was like, I can't dunk it, I have nothing left in the tank. This is going to be a layup."

Nobody attending Monday night's instant classic against the Grizzlies, the media included, cared whether that shot was a dunk or a layup. Even public address man Matt Cord took his voice up a few levels to drive home the game's exclamation point, the final touch on an absolutely preposterous Sixers victory.

(Seriously, go back and listen to that "Tyreeeeeeeeeeese Maxeeeeeyyyyyy" call a few times. Games like these are why you show up to live sporting events at all, sitting through more pedestrian games than you can recall to eventually catch a glimpse of something special.)

If winning this one felt important to the Sixers, who had to dig deep while missing Joel Embiid and other regular members of the rotation, you sensed something they were happy to talk about after the game. This season's early away meeting against Memphis was a disaster class for Philadelphia, marred by late scratches for Embiid and Seth Curry that derailed the team. The Grizzlies would end up winning that one by a whopping 35 points, which everybody in the locker room had in their minds as early at Monday's shootaround.

"They're playing great basketball all throughout the league, they've been kicking butt," Tobias Harris said after the game. "They're a team that likes to punk teams, and they have punked a lot of teams in this league. We weren't going to let that happen tonight."

The push to stop that from happening ultimately started with one of the least imposing guys on the roster, young Maxey. When Embiid takes a seat on the bench, the Kentucky product's offensive responsibility goes through the roof, with the Sixers trusting him to make things happen when designed plays and early offense don't turn up anything useful.

All Maxey did was play one of the best games of his young career, keeping pace with a scintillating Ja Morant performance and arguably outperforming him in the end when you consider the gap in efficiency and turnovers between them. A dazzling 33 points, eight assists, and four freaking blocks later, Maxey was walking into the crowd after a win as if channeling Allen Iverson, basking in the glow of an adoring fanbase.

That love has not come without work. Maxey has gone from living and dying on floaters to seeking contact and finishing; scoring only to coming closer to the look of a point guard; and hovering around 40 percent from three after early questions regarding his jumper. The finishing aspect has been troublesome lately, and Monday's game represented both a return to form and an example of Maxey taking instruction to better himself.

"He went on the stretch where he was missing those, he was releasing those too early and he was flipping it," Doc Rivers said Monday. "We kept telling him, you go downhill and you're going to go through contact, your fingernails have to hit the backboard because that means you're taking it through the contact."

That approach led to some fatalities at the basket, most notably when Jaren Jackson Jr. snuffed him in overtime as Maxey rose to the rim with the Sixers in danger of letting the game slip away. But it proved essential most of the evening, including on the bucket that ultimately won the Sixers the ballgame, with Maxey leaving both Ziaire Williams and Jackson Jr. in his wake as he turned on the jets and flew like a guided missile toward the backboard:

Philadelphia's love affair with Maxey isn't too hard to understand. He has gotten better quickly, developed a reputation as a hard worker, shown a willingness to listen to the people trying to help him, and done it all with a smile on his face whether he was the sporadic bench player of his rookie season or the nailed-on starter of this year. Even in his big moment Monday, Maxey was quick to credit Sixers staffers who have talked to him and pushed him in the right direction, name-dropping Spencer Rivers and Tyler Lashbrook for words of advice they shared recently.

The more unexpected hero of Monday's game was Drummond, who has only had to serve as a competent bit player behind Joel Embiid for the last two months with the MVP candidate a fixture in the lineup. These weren't ideal circumstances for him by any stretch, with Drummond playing far beyond a starter's workload in his first start since November. But games like these are part of why Drummond is here, and he was all over the box score, amassing 16 points, a whopping 23 rebounds, five assists, two steals, three blocks, and most importantly, the W.

In the midst of perhaps his best game this season, Drummond was made to look foolish several times, drawing dead against Ja Morant in one-on-one coverage. Drummond could hardly be blamed for becoming a victim of the Morant highlight factory or struggling to track one of the league's most dynamic ballhandlers in open spaces. He also would have been within his rights to go into overtime with a grudge, with his potential game-losing foul on Morant in the final moments of regulation looking questionable in real-time.

Instead, Drummond navigated overtime in foul trouble at an expert level, coming up with two of his three blocks in the extra session. On the first overtime swat, he even kept his head in the game enough to block Jackson Jr. and then tip the ball in mid-air to Maxey, springing the Sixers for a fast break with the second effort:

Drummond's focus (or lack thereof) has often been the downfall of his career, the difference between him being a gifted $100 million player and a guy who was benched for his final game in L.A. after a much-ballyhooed arrival last year. But he summed up the experience of coping with the Morant better than anyone.

"He's able to make spectacular plays," Drummond said. "But at the end of the day, those are still two points, you don't get extra points for style. We did a good job of just moving on to the next play, not falling asleep or falling into that lull of the huge play. He's a great basketball player, and he makes great plays down the stretch of games, you got to take your hat off to him. But we won the game, so it doesn't matter."

The joy they took from winning this one was hard to hide from the cameras, even for the guys out of sight and out of the lineup on Monday night. The seven-foot Cameroonian who leads the attack most nights emerged from the bowels of the Wells Fargo Center as the win became official, ready to embrace his teammates and (I'm sure) thank them for getting it done without him.

Back in training camp, Rivers dismissed concerns that the looming Ben Simmons situation would distract this group, positing that the opposite may be true — faced with a teammate who'd opted out of running with them, perhaps the group would be more focused and more together than ever. Even if we discount their recent surge or their overall record based on the weakness of the recent schedule, time seems to have proven that thesis correct. And this is a team that is sneakily piling up nice wins when they've been reasonably healthy: they now have wins over the Warriors, Grizzlies, Nets, Heat, and a pair over the Bulls, putting themselves right back in the mix for a top seed in the conference.

Though Embiid was not present on the court Monday, his presence continued to be felt, as pregame chats and a season's worth of leadership continued to inspire the best out of his guys.

"This year, I feel like he's being a really, really good leader. He's really helped everybody. He's helped Andre, I think he hold Andre today he needed him, and Andre told you I got you today," Maxey said Monday. "He told me to be aggressive, he said don't hesitate, just go out there and be you. He's our MVP."

While those of us on the outside continue to note the benefits of getting this group some outside help, the Sixers continue to look inward for strength. Maybe that self-belief is not enough to contend for a title, but it has been enough to rescue this season from the pit of anonymity it was pointed toward as recently as late December.