HPV infections have dramatically fallen, even among unvaccinated people

The HPV vaccine is a perfect illustration of how herd immunity works, researchers say 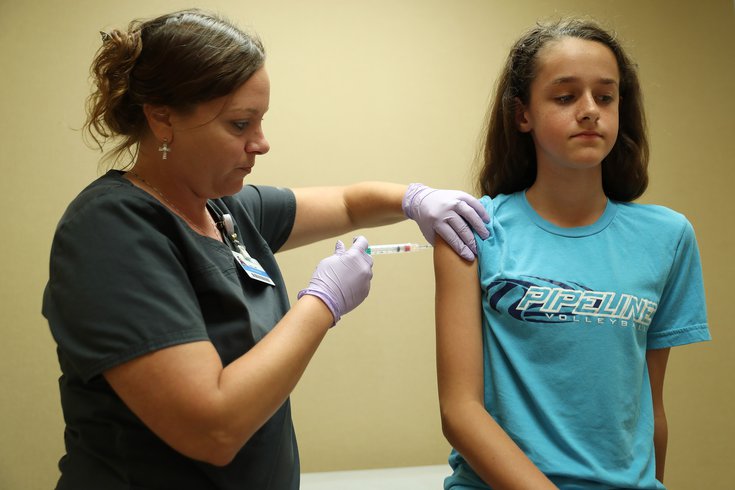 The CDC recommends two doses of the HPV vaccine for all children ages 9-14. Above, nurse Laura Johnson administers a dose to Abby Major at a health clinic in Illinois in 2018.

Human papillomavirus infections have plummeted in teenage girls and young women since the HPV vaccine was first introduced in the United States in 2006, according to a recent Centers for Disease Control and Prevention report.

Declines were observed among both vaccinated and unvaccinated populations, a finding that speaks to the effectiveness of the vaccine.

HPV strains targeted by the vaccine have declined by 88% among teenage girls ages 14-19 and by 81% in women ages 20-24 compared to the years before the vaccine became available.

Dr. Nina Shapiro, a professor of head and neck surgery at the University of California, Los Angeles, told NBC News that this finding "is a perfect example of herd immunity."

Herd immunity is what public health officials are trying to achieve through the COVID-19 vaccines. It occurs when enough of a population gains immunity against a disease that transmission rates tumble, thereby offering some protection to unvaccinated people.

HPV is the most common sexually transmitted infection in the United States. Certain strains of it can cause cancer, particularly cervical cancer in women and head, neck and penile cancers in men. Cervical cancer is the fourth-most common cancer among women worldwide.

The CDC recommends two doses of the HPV vaccine for all girls and boys between the ages of 9 and 14. Anyone who receives the first dose after their 15th birthday should receive three doses.

In 2019, 72% of girls ages 13-17 had received one or more doses of the vaccine and 54% had completed the series of shots,  according to Hannah Rosenblum, a medical epidemiologist at the CDC.

Despite the vaccine's effectiveness at preventing cancer, the HPV vaccination campaign has hit some roadblocks.

A recent Blue Cross Blue Shield report found that only 55% of commercially-insured adolescents ages 10-13 received their first doses of the HPV vaccine during a recent three-year period. Only 29% came back for their second dose.

In Philadelphia, the vaccination rates were only slightly better. Almost 57% received the first shot and 31% received the second.

The BCBS report found that the biggest reasons why many parents are still choosing not to have their child vaccinated against HPV include concerns over side effects, uncertainty about effectiveness and the fact that it is not mandatory for kids to get it.

The CDC study analyzed prevalence of HPV strains by examining data from the National Health and Nutrition Examination Survey, a national survey conducted by the CDC's National Center for Health Statistics.

The researchers collected demographic and vaccine information at home interviews, and information on sexual behavior through audio self-interviews. Then the participants were asked to submit self-collected cervicovaginal specimens at mobile examination centers.