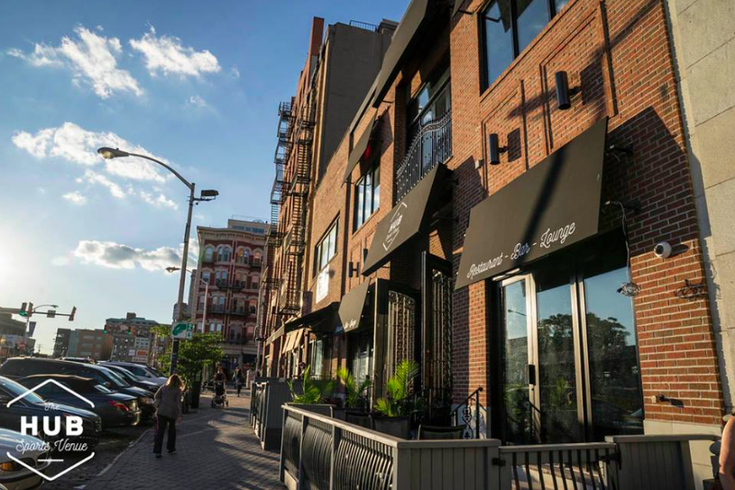 The Hub, located at 16 Hudson Place in Hoboken, New Jersey.

A man filmed performing lewd acts on a woman at a bar in Hoboken has been identified as a police officer in Pennsylvania, according to an attorney representing the club.

The incident, which prompted outrage, occurred September 8 at Hudson Ultra Bar, aka The Hub, during an event featuring "Monthly Resident Host KIRILL WAS HERE," a nightlife photographer infamously known online as "The Slut Whisperer."

Authorities in Hoboken were contacted the day after the party to review graphic videos that surfaced online from various angles in the club. The videos show a woman exposed on a bar top while a man openly performs sex acts on her in public. Another patron is seen pouring champagne on the woman.

“I saw videos of activity that I never could imagine would occur anywhere, especially in a business open to the public with a liquor license approved by the city of Hoboken and state of New Jersey," Hoboken police chief Ken Ferrante said in a statement last Thursday.

In the aftermath of the incident, Hoboken Mayor Ravi Bhalla condemned the behavior at the HUB as "an affront to human decency" and called for the bar's license to be revoked.

The license holders for the HUB, facing a slew of complaints from Hoboken's Alcoholic Beverage Control board, agreed to shut down operations in exchange for a delayed hearing on the charges, now scheduled for October 25.

Jeffrey Garrigan, the attorney representing The HUB, said in a statement on Monday that the man seen in the graphic videos appears to be a police officer in Pennsylvania. He did not reveal the man's identity.

"Over the last week, The Hub has undertaken its own investigation and has identified the couple depicted in the videos," Garrigan said. "It is believed that the male is employed by the State of Pennsylvania as a law enforcement officer and it is our sincere hope that arrests are imminent for their lewd conduct which has seriously harmed our reputation."

The statement added that The Hub is cooperating with police and will continue to conduct its own investigation.

The bar issued the following apology on Facebook last week.

Shocked Hoboken residents, responding to the videos and witness accounts of the incident, told NJ Advance Media the behavior at The Hub was "disgusting" and "crazy."

Various videos of the incident were shared on social media and had remained accessible on Twitter as recently as late last week.

Kirill Bichutsky, the touring nightlife photographer and social media impresario, was not facing any criminal charges in The Hub incident as of Monday. Garrigan said Bichutsky had performed at The Hub six or seven times in the past "without anything anything even remotely resembling this occurring."

"We will continue our investigation in the hope of determining who is responsible for placing these people at our establishment to engage in these shameful acts to our financial detriment," Garrigan's statement continued.

A spokesperson for the Pennsylvania State Police told PhillyVoice the agency is aware of the incident and Garrigan's statement but could not immediately provide any information.

Bhalla said the incident at The Hub will not be accepted at any of the city's establishments.

"Let this response serve to warn other bar owners that my administration will not tolerate this sort of behavior," Mayor Bhalla said in a statement. "This is not what Hoboken is about, it is not what the people of Hoboken deserve, and I simply will not allow it to happen again under my watch."