I scream, you scream, what happened to our beloved Phillies Graham Slam Ice Cream? 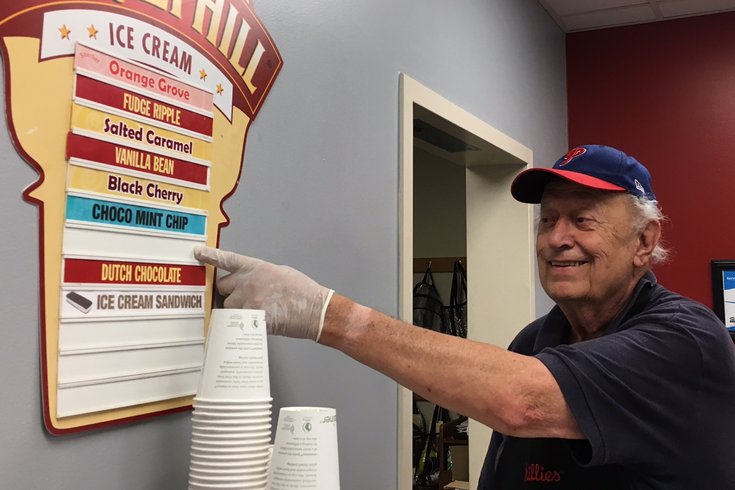 Frank Mazzuca, known all around baseball as Frank the Ice Cream Man, points to the empty spot where Turkey Hill's Graham Slam ice cream resided a night earlier. Is it gone for good?

The 12-ounce Dixie cup sat alone in the crowded freezer filled with frozen treats, ready for a special someone who had put in an early order for his or her favorite ice cream.

But the latest crazed media member in search for the disappearing flavor at Citizens Bank Park grew anxious and excited, like Charlie Bucket in pursuit of a golden ticket.

“Is that it??” he asked Frank Mazzuca, perhaps the nicest man in South Philly and also the long-time ice cream scooper in the media dining room at the 14-year-old ballpark. “Is that Graham Slam??”

You may find this difficult to believe – or perhaps you’re a fellow ice cream aficionado and understand – but we take our ice cream seriously at Citizens Bank Park. We pay a fair price for a fine dinner each night at the ballpark, and at the end of that dinner is the dessert, one that’s considered the best in baseball.

The product on the field at Citizens Bank Park has left a lot to be desired in 2017, as the Phillies are flirting with finishing with the most losses in baseball for the second time in the last three seasons. The product in the ice cream freezer in the media dining room is unrivaled around the game.

While beat writers tweet out the Phillies lineup each day, Sportsradio 94-WIP host Jon Johnson, a regular at games, tweets out a different lineup.

Weather at CBP may not be hot, but this lineup is. pic.twitter.com/WVCssm4UaA

But it’s not just the local press that’s (weirdly?) enamored with the ice cream. Writers from across the country look forward to their three scoops from Frank, too. To heck with a trip to Pat’s, Jim’s, Geno’s, or John’s Roast Pork. We want what Frank is serving.

And, yes, Graham Slam is nearly everyone’s favorite. So it was hardly surprising when, 10 days ago, a more than minor uproar came about from the following tweet:

Unfortunately, our Graham Slam Ice Cream was discontinued due to a lack of sales.

And, like a lot of “news” on social media, it spread through Phillie fandom like wildfire through King’s Landing. There was disappointment and there was outrage. It was unfathomable, really.

this just in: Turkey Hill discontinues Phillies Graham Slam
also just in: i have nothing to live for

How can they take away our beloved Graham Slam ice cream?

“I couldn’t believe it – everyone has been asking,” Frank Mazzuca said. “The Hall of Fame called asking about it.”

The National Baseball Hall of Fame, surely, and not the Ice Cream Hall of Fame. If the latter exists, Graham Slam is an easy first-ballot selection.

But, back to the most important question anyone has been asked at Citizens Bank Park in 2017: is it gone, Frank? Are the rumors and reports true?

On Wednesday night, media members flocked to Frank for one last scoop of the delicious dessert.

Frank Mazzuca is a people pleaser, though – he carries an ice cream scooper for chrissake – so perhaps this was his delicate way of letting a friend down or delivering the news no one wanted to hear.

So we pressed on.

A team dining room source said someone by the name of ‘Mary Ellen’ was the supplier. She did the ordering and the stocking of the food and treats and would have the answer. But she worked days, and no, sure don’t have her phone number.

But, then, a ray of hope from the unlikeliest of places. Twitter, once again. The time-sucking social media giant which started the whole thing churned out the following tweet from PhillyVoice pal John Clark of Comcast SportsNet.

Here's the scoop on Graham Slam🍦@TurkeyHillDairy

After saying theyre discontinuing it, now say they will serve at @Phillies games!✌🏻 pic.twitter.com/ql9uSDkfcN

Back to the man holding the ice cream scooper for an update.

“It’s coming in on Monday,” Frank said, “and we’ll have it back out for Tuesday’s game.”

So it hasn't been discontinued? Could this be true??

Please, baseball and ice cream gods, give us something in this lost summer of 2017. Because they may take away our summer nights, but they’ll never take our ice cream!

Could it be a representative from Turkey Hill Dairy returning a phone call? Could we finally get the scoop on what’s going on with the great Graham Slam?

“I think there was some miscommunication,” Andrea Nikolaus, Turkey Hill’s public relations and social media coordinator told PhillyVoice on Thursday night. “I can definitely clear it up on behalf of Turkey Hill. The flavor itself is not being discontinued. So we can all take a deep breath.”

So, you will not be able to purchase Turkey Hill’s Phillies Graham Slam (how it’s looked on store shelves) at the supermarket anymore.

But, look. We don’t care much for the supermarket shoppers. We work at the ballpark. 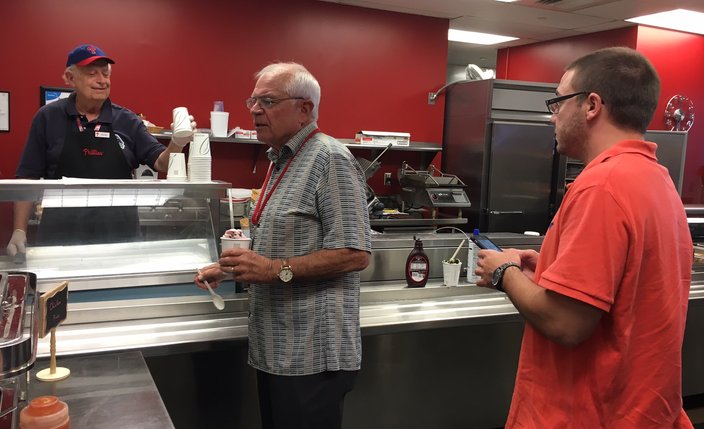 It was a slower night than usual at the ice cream line inside the media dining room at Citizens Bank Park. Graham Slam ran out a night earlier Coincidence?

“It is going to be served at Citizens Bank Park,” Nikolaus said. “Nobody got the last taste of Graham Slam Ice Cream at the ballpark last night. I even talked to some of our Phillies contacts today and they said, ‘Nope, we got a shipment of the ice cream today in.’ So, no worries, no fear. You will have it in the pressbox, you will have it around the ballpark for people to enjoy during a great game of baseball.”

Or during a bad game of baseball.

Regardless, there is once again joy in Philliesville. The mighty Graham Slam will be back.

But that was a close call, huh? And you have to admit it got a little crazy there for a minute, Andrea.

“Personally it’s one of my favorites, too, so I’m not surprised (at its popularity),” Andrea Nikolaus, our new favorite ice cream social media czar, said over the phone as an Irish band played the Star-Spangled Banner at the ballpark. “We know we have some passionate fans. But it is overwhelming, but also a good reminder that we’re making something people love, which is what we’re here for.”

Andrea Nikolaus laughed. We let out a sigh of relief, hung up the phone, and dug back into our Dixie cup filled to the brim with three scoops of Chocolate Mint Chip.

Frankly, it’s pretty good, too, and, at the very least, a competent replacement level player for Graham Slam.