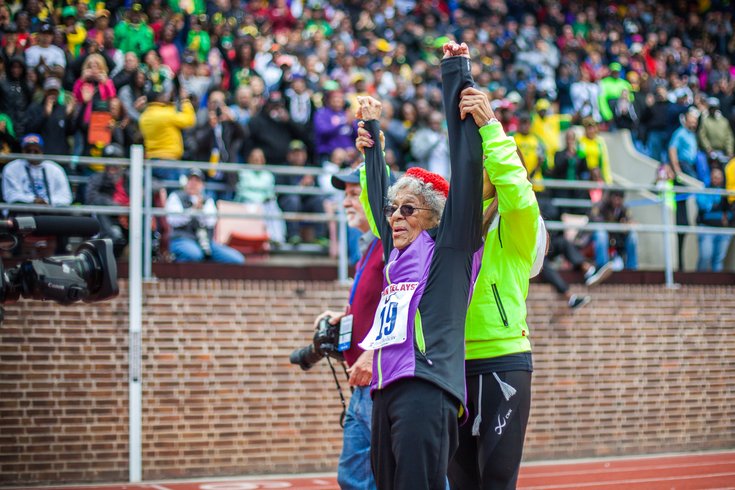 The weather didn't exactly cooperate for much of this year's Penn Relays (or the Broad Street Run, for that matter), but a little rain on the parade didn't stop 100-year-old Ida Keeling from claiming a world record at Franklin Field on Saturday.

Competing in the Masters Mixed 100-meter Dash against several others in her 80-and-up age group, Keeling pulled off a record time of 1:17.33 for a centenarian, according to Runner's World. For comparison's sake, Jamaica's Usain Bolt holds the world record for the 100-meter dash at 9.58 seconds.

This isn't exactly Keeling's first rodeo. At age 67, her daughter and trainer Shelley entered her into her first road race and since then Keeling has been racking up records as her age continues climbing. In a detailed New York Times profile, Keeling's training regimen is explored as an achievement and anomaly for someone her age.

After Saturday's race, as 34,000 people looked on at the University of Pennsylvania, Keeling was thankful for the experience.

“It was wonderful,” Keeling said. “I’m very happy to offer all of this crowd a nice example of what you can do for yourself, and I thank God every day for my blessings.”

In celebration, Keeling even dropped to the ground and performed five push-ups.

Other highlights from the 122nd annual Penn Relays included a U.S. victory over the rest of the world in five out of six main events and an illustrious Wheel for the hometown Penn Quakers in the College Men's 4xMile Championship of America.