What happens if it rains during Flyers - Penguins outdoor game at the Linc tonight? 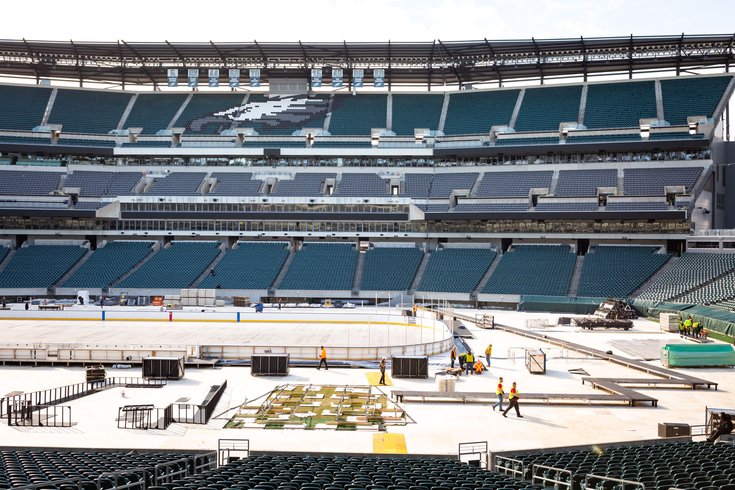 Lincoln Financial Field is being transformed into an ice rink for the 2019 Coors Light NHL Stadium Series. Some of the work on the cooling system was done by the Steamfitters local union 420 to keep the ice frozen.

Weather reports say there is around a 50 percent chance of rain Saturday evening, when the Flyers and Penguins play their much anticipated outdoor game at Lincoln Financial Field.

At noon, the NHL released some interesting and useful information for fans going to the game. Here's an excerpt from the update on the game, which will drop puck around 8 p.m. as scheduled.

• Once the game has begun, it may be subject to one or more temporary stoppages due to unplayable weather conditions, at the discretion of the Commissioner.

• Period and game format may be reconfigured to accommodate temporary stoppages as determined appropriate by the Commissioner.

• In the event of a shootout, each club will determine what end they prefer to defend, which could be the same end.

• If the game is started, then stopped permanently due to unplayable weather conditions, it will be deemed "official" once two periods have been played. The team leading at the time play is stopped will be declared the winner and will be awarded two points in the standings.

• If the game is tied at the time play is stopped permanently, any time after two periods of play, each team will be awarded one point in the standings, with an opportunity to earn an additional point in a standard shootout format.

• If weather conditions permit, the shootout will be conducted at Lincoln Financial Field immediately after regulation play has been stopped. If weather conditions make it impossible to conduct a shootout safely at Lincoln Financial Field, the shootout will take place at PPG Paints Arena on Sunday, March 17 prior to the regularly scheduled Philadelphia-Pittsburgh game, with Philadelphia deemed the home club for shootout purposes only.

• If the game is started, and stopped permanently due to unplayable weather conditions, and fewer than two periods of regular time has been played, the game will be officially "postponed" and, if possible, will be played in its entirety at Lincoln Financial Field on Sunday, Feb. 24. If the game cannot be replayed at Lincoln Financial Field on Sunday, Feb. 24, it will be rescheduled at Wells Fargo Center on a date to be determined later in the season.

• Ticket holders must retain their tickets to gain re-entry to Lincoln Financial Field in the event the game is to be played Sunday, Feb. 24. There will be no refunds for ticket holders unable to attend postponement date. If the event is canceled on Sunday, a refund of the ticket's face value will be honored. Ticket holders should review the back of their ticket or click here for complete refund policy language.

The Flyers will start Brian Elliott in goal, with the news of Carter Hart's minor lower body injury coming this morning. With the trade deadline looming and the Flyers sliding back in the standings. Saturday night's game could be the last Flyers game ever for Wanye Simmonds and other Flyers rumored to be on the trade block.