In defense of UberX or: How I learned to stop hailing cabs and love the app

A former taxi-lover is converted

An UberX driver keeps his Uber sticker in his car console when driving in Philly.

I was an UberX virgin until a few months ago. And for good reason, I thought. I had heard the whispers and read about some of the controversies – is it legal, I wondered?

It took a friend to show me the charms of the new driving service, which has become a bane for the Philadelphia Parking Authority (PPA) and cab companies citywide. For the past 15 months since its launch, UberX has been operating illegally in Philly along with other rogue services like Lyft - and the PPA has been making sure they remain illegal. Is it possible that thousands of Philadelphians just like me have been abetting this dastardly crime all along?

But the truth is, the dark cloud hanging over UberX was never really enough to keep me from giving it a spin. If anything, controversy stoked my curiosity. Why is it so threatening? What does it offer that has the PPA’s panties in a twist and cab drivers lining up to block rush hour traffic in protest?

“You mean some dude shows up in his own car and drives you somewhere?” I asked a friend of mine who had been singing Uber's praises ever since he began using it last summer. Rather than try to explain the nuances of why this could possibly be a good idea, we simply went for a ride.

Like many people on the verge of breaking the law in some of my favorite books and movies, we, too, waited at dusk in an empty playground a block from South Street for our car to arrive. It felt a little seedy. And I felt a little dirty, like I was cheating on the cab companies that I had come to rely on ever since I moved to Philly in 1999. Liberty. Old City. Even Freedom Taxi. With my hands in my pocket and my eye on this new-fangled app, I tried to make sense of why something so seemingly innocuous could possibly be considered so dangerous to the future of Philly transportation.

I barely had time to contemplate the many layers of this urban kerfuffle (cars clogging the road, fear of technology, PPA stinginess?) before our UberX driver promptly arrived. It turns out this is normal. Ever since using the service I’ve had to wait no more than five minutes for drivers to show up like, well, magic. And thanks to the app, I can also know the name of the driver and the make and model of his or her vehicle, an advantage for someone like me who can scarcely tell the difference between a Lincoln Navigator and a Cadillac Escalade.

The latest dustup in which the PPA is alleged to have been working with cab companies to crack down on UberX is just the tip of the iceberg in this battle over street supremacy.

Upon inspection – believe me when I say I was checking out this vehicle from top to bottom for any signs of creepy, serial killer activity – the car was clean (but not too clean that it was bleached to hide evidence) and the driver was…nice. He even asked if the temperature was comfortable. I didn’t know how to respond since no one ever asked me that in a taxicab before. By the time I got to my destination I had already downloaded the app and was ready to go on the next adventure. I was officially an UberX convert.

Ordering a car service has become as easy as ordering my morning coffee from Starbucks. All I need is an app and some directions and we are good to go. In UberX’s case, I simply needed to download the free app and create a profile with photo and credit card information. The selfie helps drivers identify riders for pickup. And rather than wrangle with time-consuming money exchanges, the credit card on record is automatically charged (tip included).

The only downside to the service is the rate hikes, which can sometimes double and even triple the fares in busier-than-usual times of day (think: rush hour or bad weather). Fortunately, the app alerts users of these hikes so you can avoid them or accept them depending on how desperate you are to get to your friend’s house for pizza. The important thing is you’ll never be surprised by them.

The other big selling point to the service is being able to chronicle my ride from start to finish using the app. I can even text my route to a friend who can follow along. And I can rate the driver, something I could never do for even the most memorable cab drivers – not even the one who drove 60 mph down Spring Garden Street despite the blood-curdling screams coming from the back seat to pull over. (When I tried to call the cab company to report this "Fast and Furious" wannabe, the dispatcher would hear none of it and hung up on me. Hashtag customer service fail.)

It’s no wonder why many cab drivers are angry about Uber flooding the marketplace with seemingly happy, independent contractors.

Currently, Uber has a range of transportation options in Philly, including UberSUV and UberBlack (both of which are legal in the city because they are treated similarly to limousine services). It’s UberX and UberXL (larger cars) that are raising eyebrows because they are not (yet) regulated. There is a bill being considered in the state legislature that could regulate UberX, Lyft and similar services, though so far no one has been able to agree on how this might work. Meanwhile outside the city, ride-hail services operate freely under a two-year agreement with the Pennsylvania Public Utility Commission.

In New York, as well as a few other cities, Uber even offers a convenient ride share option that will now be coming to Philadelphia. If a rider agrees to share the ride with someone else going to a nearby destination, the estimate won’t exceed a certain price. I recently used the option for a ride that would probably cost at least $15 to $20 by cab midmorning in Manhattan. The ride ended up being cheaper (about $10), thus romancing me even deeper into this tawdry love affair between woman and machine.

The first UberX driver I ever met – a round, friendly middle-aged man with a Caribbean accent – told me he was working to raise money to help build a church in his community. He was already half way to his goal. Another driver – a white millennial – said she drives to subsidize her income as a caterer. A former bartender, she only drives in the morning when rates tend to spike to cash in on commuters and students in West Philly. She first started driving for Uber because she liked the idea of setting her own hours. If she doesn’t want to drive one day because she has a catering gig, she doesn’t have to. Her one rule is to never drive at night alone. Even though UberX drivers don’t carry cash, she’s not taking any chances.

Around the holidays I met another UberX driver, a young white male in his 30s from suburban South Jersey. He had been driving in Philly on weekends to make extra money to buy his kids gifts for Christmas. Sporting an Eagles jersey, he told me he would clock out for the day before the game got started. Priorities, he said.

Another – a black woman nearing her 50s – was recently laid off from an office job. She was clocking UberX hours until she could find something full time. Her cousin told her about the service after becoming a driver herself. She told me that the money was decent and she liked using the app to pick up fares. Her car wasn’t in the greatest shape, but she played the best old-school hip-hop.

If you ask, you’ll find that drivers each have their own stories to share about why they’re driving despite the fact that some of them have been arrested and had their cars impounded. Philly, as it turns out, is a bit of a cash cow for drivers from the suburbs. With the right car, a contract with Uber and a decent GPS system, pretty much anyone who wants to make extra money can do so.

This isn’t to say that cab drivers are bad at what they do or shouldn’t be doing it. They work hard. They often drive difficult early morning and late-night shifts. And they do so at great risk because they do carry cash and everyone knows it. They are also forced to deal with frustratingly high operating fees and glitches in credit card systems that can eat up their tips. It’s no wonder why many cab drivers are angry about Uber flooding the marketplace with seemingly happy, independent contractors.

Competition is healthy, especially in a system that needs to be reformed to better serve the community and its workers. Competition forces the status quo to up its game while making the new kid on the block work harder to grab a market share. This doesn’t mean things won’t be challenging in the interim as cab drivers bitterly protest having to share the streets with UberX (though I’d argue blocking traffic isn’t a great way of winning riders to your cause) – or that the PPA won’t try to fight the service with more militancy as it sees its increased success. 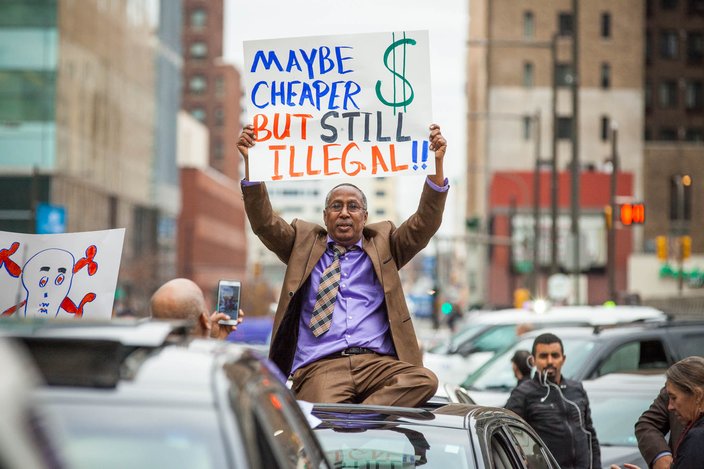 Hundreds of taxi and limousine drivers protested Wednesday, Dec. 16 2016, by blocking the streets near Philadelphia City Hall to raise concerns about ride-hailing services like Uber and Lyft.

But the latest dustup in which the PPA is alleged to have been working with cab companies to crack down on UberX is just the tip of the iceberg in this battle over street supremacy. With talk of more undercover stings, it’s bound to get even more ugly. The upside is the PPA may be forced to take a hard look at how it operates.

Case in point: I met a taxi driver a few weeks ago who says he’s also moonlighting with UberX. Young and Middle Eastern, he was a skilled driver who knew the city streets well; he had been driving a cab for a few years since moving to the U.S. So why on earth would he consider going to the dark side and risk it all with UberX? He said he’s frustrated with the system. He wasn’t making the money driving a cab that he was making before UberX entered the picture. Practically speaking, he wanted to see what the competition was all about.

He would never commit to whether he’d be willing to give up his taxi for good, especially not knowing the fate of ride-hail in Philly. But he did admit that he thought most UberX riders are better behaved than the fares he picks up in his cab. We talked about whether this could be because people share their information and are held accountable for their actions. He agreed, but said that he thinks it’s really because people treat it as something they buy rather than something they use. He felt more respected in UberX though he was doing the same job.

I made sure to give him five stars.