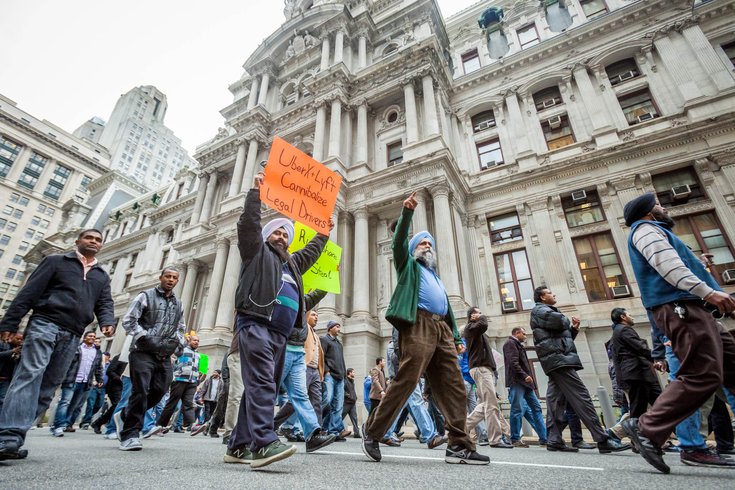 Hundreds of taxi and limousine drivers protested Wednesday, Dec. 16, by blocking the streets near Philadelphia City Hall to raise concerns about ridesharing services like Uber and Lyft that are becoming more and more popular with commuters in the city.

The class-action complaint filed Wednesday claims, among other things, that Uber “failed to pay Plaintiffs … compensation according to the requirements of the Fair Labor Standards Act, the Pennsylvania Minimum Wage Act and the Pennsylvania Wage Payment and Collection Law.”

The suit claims that UberBlack drivers, who are certified drivers in the service’s “on-demand limousine service,” are misclassified by Uber as independent contractors “even though they are actually employees under federal and state law."

UberBlack drivers complained at December’s rally that the lower-cost UberX service’s arrival into Philadelphia has cost them a substantial amount of business.

The Philadelphia Parking Authority considers UberX illegal – Uber deems it a “ride-sharing service” not subject to PPA oversight – despite the fact that it’s licensed to operate throughout Pennsylvania.

"Drivers are independent contractors who use Uber on their own terms; they control their use of the app. As employees, drivers would lose the personal flexibility they value most: They would have set shifts, earn a fixed hourly wage and be unable to use other ridesharing apps." – Jessica Santillo, Uber spokesperson

“In blatant disregard to taxi regulations, UberX illegally charges rates lower than those approved by the PPA. UberBLACK drivers are disadvantaged by UberX’s anticompetitive rates,” the suit claims. “Uber has told UberBLACK drivers to become UberX drivers, even though UberX is illegal and UberBLACK drivers have invested thousands of dollars in operating costs.”

In the 30-page complaint (UberBlack Lawsuit Against Uber), plaintiffs Ali Razak of the Philadelphia Limo Service, Kenan Sabani and Khaldoun Cherdoud indicate they’re seeking a jury trial on behalf of current and former UberBlack employees. Though they joined UberBlack drivers at December's anti-Uber protest, cab drivers are not involved in this suit.

Jeremy Abay, the attorney representing UberBlack, said Thursday that the plaintiffs are seeking “unpaid wages, unpaid overtime, reimbursement for expenses and also seeking to get the business back from UberX and damages arising from UberX’s illegal operations.” There is no specific dollar figure listed.

“From here, Uber will assign a defense firm to the case,” he predicted. “I anticipate Uber will fight this case through procedure before any merits of the case are determined.”

When reached for comment, Jessica Santillo, an Uber spokesperson, told PhillyVoice that “nearly 90 percent of drivers say the main reason they use Uber is because they love being their own boss.

"Drivers are independent contractors who use Uber on their own terms; they control their use of the app. As employees, drivers would lose the personal flexibility they value most: They would have set shifts, earn a fixed hourly wage and be unable to use other ridesharing apps."