Cabbies shut down part of Center City for UberX protest 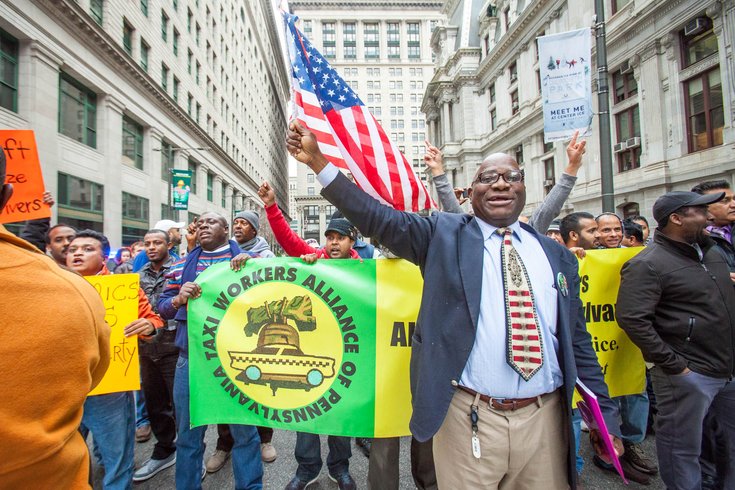 Hundreds of taxi and limousine drivers protested Wednesday, Dec. 16, by blocking the streets near Philadelphia City Hall to raise concerns about ride-sharing services like Uber and Lyft that are becoming more and more popular with commuters in the city.

Droves of taxi and UberBlack drivers shut down streets surrounding Philadelphia City Hall at lunchtime Wednesday to demand officials take steps to get ride-sharing services to comply with the same laws to which they’re subjected.

Chanting “No Uber-X, No Lyft,” they circled City Hall on foot and in a procession of honking UberBlack vehicles, forcing police to shut down access to traffic on all four sides of the building for roughly an hour.

Parked cabs blocked multiple lanes of Market and 15th streets. On their windshields were orange signs reading, among other messages, “We need a level playing field,” “UberX and Lyft Cannibalize Legal Drivers,” “District Attorney, Help” and “Ubernomics: Stop the race to the bottom.”

The group – passionate and boisterous as it took over city streets – included cabbies like Mohammad and Aftdab Alam, who have both driven for more than three years.

“We can’t buy food because UberX is taking customers. They’re not legal. They don’t have licensing,” said Mohammad Alam. “They’re coming from New York, New Jersey, Delaware to do this.”

Aftab Alam estimated that he now earns about $30 on a four-hour shift.

“If they were legal, it would be OK. Everybody needs to be even,” he said, explaining that UberX and Lyft elude the Philadelphia Parking Authority oversight faced by him and other licensed drivers. “We have no money in our pockets because of illegal UberX.”

Another driver, named Dave, brought a unique element to the protest: he drove marijuana activists N.A. Poe and Mike Whiter, who smoked up in the vehicle while interviewing the driver about the issue. He said he was willing to risk the $150 for people lighting up in a cab for the chance to merge the cab protest with a #smokedownphilly event. 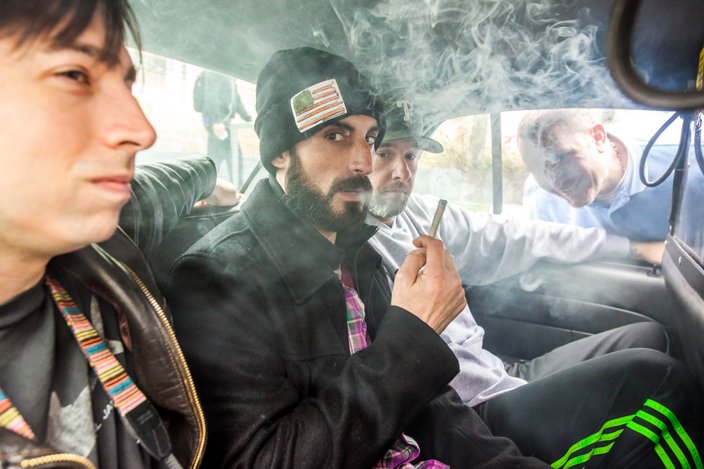 Marijuana activists N.A. Poe, middle, and Mike Whiter, right, turned the UberX protest into a #smokedownphillyevent as cabbie Dave looks in from the outside. (Thom Carroll/PhillyVoice)

Before the group of well-over-100 cabbies coalesced into a march-together unit – some handed out “Here’s Why You Should Care” flyers noting that some ride-sharing drivers may be on the road illegally, uninsured and without background checks – Ronald Blount, president of the Taxi Workers Alliance of Pennsylvania, said he's grown tired of waiting for officials to take proper action.

“UberX has been in the city for a year now illegally and we’ve been patient with lawmakers, the District Attorney [Seth Williams], the state Attorney General’s office. The PPA is just outgunned,” he explained, alluding to a bill under consideration in the state senate. “The UberX division needs to leave the city until they finish working on that bill.

“They already have an UberBlack division that follows all the rules like everyone else, but you can’t have an arrogant company which has so much money that they think they can operate in a city without licensing. So, we’re here to send a message to the city.”

That message, Blount said, includes the fact that Wednesday’s protest was the first, not last, of its type. He noted that his coalition consists of the “drivers who pick up people with disabilities” and fees paid by cab drivers help fund the School District of Philadelphia.

“It will eventually lead to several-day strikes of taxicabs and UberBlack [drivers],” he said. “We’re all out here working longer hours and making less and less money. We have to stop this race to the bottom. We do everything that’s been asked of us, and we’re the ones being impacted most.”

Craig Ewer, who approached a reporter to ask for an email address to send a statement from Uber, did just that with a comment from an Uber spokesperson.

“Many taxi and limousine drivers are understandably frustrated because the Philadelphia Parking Authority’s outdated rules make it harder to earn a living when the public has shown they want more affordable options,” it read. “Each year, the PPA requires limousine drivers to pay $404 per vehicle for a PPA sticker and $130 for their chauffeur’s permit to be renewed.

“They also subject drivers to obsolete vehicle restrictions and onerous insurance requirements," the Uber statement continued. "We believe statewide reform of the PPA that allows for regulated ridesharing will benefit both riders and drivers.”

Jeremy Abay, an attorney representing UberBlack and some taxi drivers, maintained outside the DA’s office that UberX and Lyft are subject to different rules since they’ve positioned themselves as “transportation network companies” which exempts them from PPA oversight.

That argument has had limited success in other jurisdictions, he said.

“This is not innovation," he said."They are breaking the law, which means they can lower the rates below the taxi-driver rates, which, by the way, are regulated by the PPA. They’re completely undercutting the market by what they’re doing.”

Both he and Blount rued the thought that the PPA doesn’t have adequate staffing or funding to undertake proper enforcement, and how the district attorney's office said it has no jurisdiction in such a case.