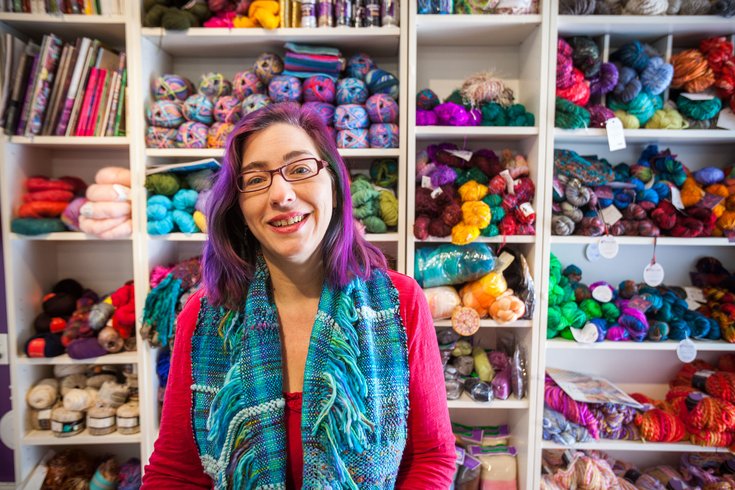 The art of knitting has continually gone in and out of vogue since, well, the birth of "Vogue" in 1892. Since the Industrial Revolution of the mid 19th century took the craft out of the home and into the mills, knitting has vacillated between a hobby and a necessity.
In the 1920s, "women's work," like knitting, was scorned by free-thinking Jazz Age women but the 30s brought it back as a fashionable hobby and Depression-era resourcefulness. The 40s saw women patriotically knitting for the soldiers of World War II, before it was done away with in the post-war technology boom. The 60s revived the craft as handmade projects became symbols of the counterculture.
A similar tug of war between capitalism and anti-consumerism made knitting trendy again in the mid 2000s as the DIY movement grew legs. In subsequent years even celebrities like Amanda Seyfried and Ryan Gosling 'fessed up to the habit, with online communities like Ravelry (which boasts 4.2 million users), Pinterest and Etsy feeding the frenzy.
Though the trend is sure to swing out of style once again, a community of Philadelphians is in it for the long haul. Meet the owners, instructors and crafters keeping knitting cool. 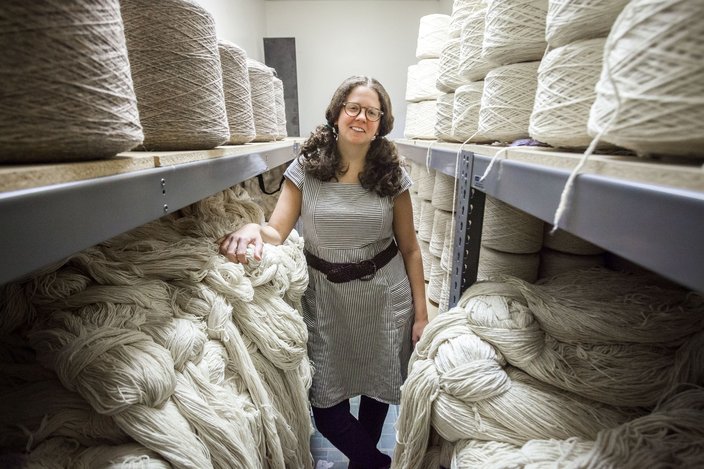 Thom Carroll/PhillyVoice.com
Proving the local fiber craft community is, ahem, tight knit, if you take a spin around select regional yarn stores you'll find the work of Philadelphia manufacturer Jocelyn J. Tunney. Her brand, O-Wool, creates locally made, environmentally friendly yarns.
Tunney sources her fibers from certified organic farms around the world. Though O-Wool is spun in Massachusetts, it's wound into skeins (the small bundles you'll find in the store) in an old Kensington mill. Then those skeins are dyed in Germantown in a textile mill built in 1885. Thus, Tunney's business remains firmly entrenched in Philadelphia's historic textile industry.
Creating yarn locally not only allows Tunney, who also works at wholesale yarn distributor Fairmount Fibers, to lower her environmental footprint. Staying close to home allows her to create personal connections with her manufacturers, too. For its owner, O-Wool exemplifies all the benefits of locally produced goods.
"It just feels really great to have something manufactured almost literally in my backyard," Tunney said. 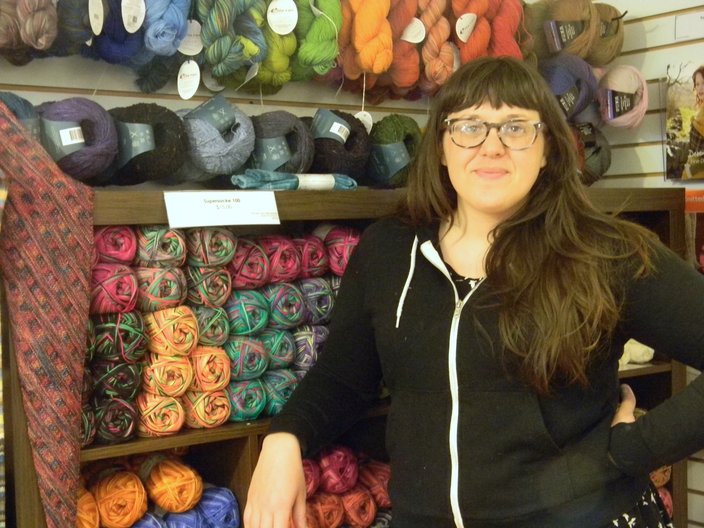 When learning a new skill, much of one's success depends on the instructor. Andrea Mules, who regularly teaches at Rosie's Yarn Cellar in Rittenhouse, has been that guide to many. In the cozy basement shop, Mules ushers students young and old into the knitting world through beginner classes where they create mittens and hats rather than the usual plain old scarf.

Mules began crocheting as a young girl, later teaching herself to knit in college. After graduation she moved to Philadelphia, ending up right around the corner from Rosie's. She soon began popping in for supplies and became familiar with the employees and shoppers. Mules eventually picked up a shift at the store before becoming an instructor.

But she isn't just teaching people how to knit; Mules is fostering community. She said former students without a familial crafting background often frequent Rosie's in search of friendship and bonding.
"Making friends as adults can be difficult sometimes and I think this is a nice way to have connections with people ... you would never come across necessarily," Mules said.
As for those afraid to take the plunge, Mules is sure, "Anybody really can do this and learn it at any age." 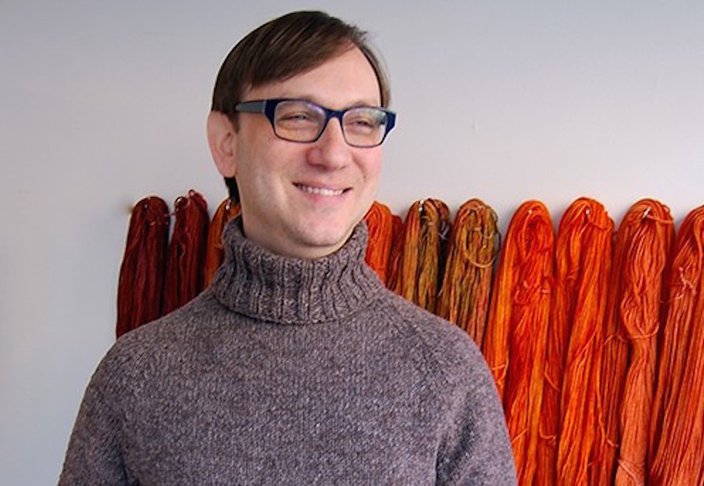 Loop/PhillyVoice.com
Serving as the local knitters' solution to mass-market craft stores, Loop yarn store celebrates a decade of service this April. Owner Craig Rosenfeld began Loop an e-commerce site in 2004 before opening up a brick-and-mortar location the next year. It now serves as a hub for the knitting community with classes, events and plenty of supplies.
Rosenfeld got the idea for the store while looking for a career change. He learned to knit as an adult and fell in love, then combined it with his previous experience working at independent retailers in college. His Graduate Hospital neighborhood was just hitting its stride, so the shop's opening was a success.
Citing an influx of color options for expanding the yarn market in the last decade or so, Rosenfeld said Loop strives to offer products not available in mass-market stores. He does, however, credit larger chains with helping newbies get into the craft.
Some of Loop's unique products include the on-trend hand-dyed yarns Rosenfeld said have been big sellers of late. But which product is his favorite? "I have rarely met a yarn that I don’t like," he said. 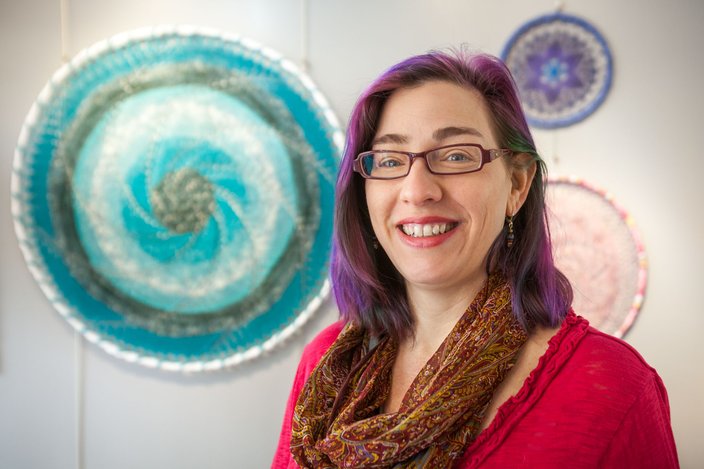 Thom Carroll/PhillyVoice.com
While there are casual, seasonal knitters and hardcore, head-to-toe knitwear types, few fiber artists can truly claim the title. Nancy Nagle (no relation) is one who heartily deserves it.
Nagle creates knitted and woven art that ranges from hanging woven tapestries to knitted mandalas to wearable sweaters and scarves. From free-form crochet to yarn spinning, she's tried every fiber technique one could imagine. She opened a gallery and store for her art and yarn products called Nangellini on South Street in 2004. In November, she moved her shop to Northern Liberties.
Like the changing audience that made Nagle move from the now bar-heavy South Street to the artist-friendly NoLibs, she's seen the members of the knitting community change, too. As much as knitting has become a trend among new, young crafters, Nagle cites sustainability as part of its recent popularity.
"I think it’s much more hip and cool to be knitting and crocheting and making your own things and that element keeps growing. People want slow food, they want slow hats!" she said.