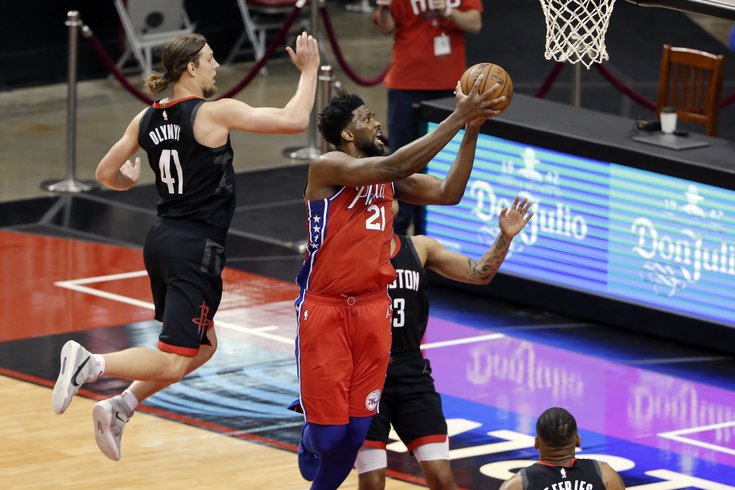 Joel Embiid was his usual dominant self in Houston Wednesday.

The Sixers disposed of the undermanned Rockets with ease on Wednesday night, coasting to a 135-115 victory behind 34 points from Joel Embiid. And thanks to a good bench performance, the Sixers' starters got to rest for the entire fourth quarter, which was the real victory.

• Kelly Olynyk's inability to stop Embiid is not exactly a secret this deep into their respective careers. Even without playing his most aggressive basketball — Embiid settled for some early clock threes in the first half that he has turned down most of this season — Philadelphia's man in the middle had a nice bounce-back game after a down night in Chicago.

Perhaps that undersells his evening. Embiid rolled for 34 points and 12 rebounds against the Rockets, doing so with a steady diet of post touches and face-up jumpers, forcing the smaller Rockets to send him to the free-throw line all night. Though he lacked some verve on the defensive end of the floor (particularly in transition), Embiid got down the floor early and forced the Rockets to match his pace on offense, earning deep positions and free-throws drawn for his trouble.

The free throws and bully ball in the post were a given coming into this one, but Embiid's passing was arguably the highlight of the night for Philadelphia. Houston kept sending help at the big guy in the painted area, and rather than trying to bulldoze everything and everyone in his path, and his trend of picking teams apart over the top continued, with Embiid making some terrific passes to the weakside corner that allowed the Sixers to get open three after open three.

Not all of those opportunities were cashed in on — Seth Curry left at least a couple on the table by himself — but it's the reads that matter in a game as uncompetitive as this one was for most of the evening. Embiid can still be mechanical making passes out of the post or from a face-up position, toggling too obviously into scoring or passing heavy modes, but he did an excellent job of blending the two together based on the reads he saw against Houston.

This is what a star is supposed to do against crappy teams. No reason to throw a parade for punking this team, but I certainly appreciate that he is coming through the way he's supposed to this year instead of mentally checking out against bad teams. Casual dominance is still dominance.

• Against elite teams around the league, Matisse Thybulle is a valuable weapon who gunks up the gears and gives Philadelphia a credible option to defend elite players. Against teams like the Rockets, he might as well be playing with cheat codes and rocket shoes on. Lazy passes and half-hearted attempts going toward the rim are going to be punished swiftly.

That's exactly what happened early, with Thybulle piling up three steals and two blocks against the Rockets in the opening seven minutes he spent on the floor. His defensive rate stats are downright comical at times, and were it not for the spacing issues that can happen as a result of his come-and-go jumper, he'd be an even more dangerous weapon for the second unit.

• Sometimes these games against crap teams are a nice way to get a head of steam going, and no one took better advantage of the talent mismatch than Shake Milton. Given plenty of leeway on the second unit, Milton had one of his better attacking efforts in a while, finding pockets of space inside the arc and canning some catch-and-shoot threes when he was moved away from the ball to allow George Hill and Tyrese Maxey to handle the ball a little bit.

On paper, he's the guy who seems to gain the most from the new configuration the Sixers have assembled on the second unit. When it was Milton and Furkan Korkmaz as the only guys on the floor who could dribble, there was an excessive amount of pressure on him to carry them as a ball-handler. It should not shock anyone that his best moments this season have often come when he can play more of a combo guard role, taking the path of least resistance depending on the matchup.

(This is the real beauty of the Hill acquisition. His impact might end up being more important in closing groups depending on how the rotation shakes out, but the easier he makes life for Milton, the deeper this team looks.)

And yeah, the opponent had a lot to do with his big night in Houston. Milton's lack of burst isn't noticed as much against a team that can't protect the rim or stay with opposing perimeter players, and those traits also make his touch around the rim look better. But this was still a strong night that the Sixers will hope he can build on as they inch ever closer to the postseason.

• Danny Green is not the most versatile offensive player in the world, but he is an absolute master at the shortlist of things he does well. You would think teams would have found a way to deny him the baseline cut/corner three by now, but the beauty of how he goes about his business is that denying one option simply opens up the other. Block the path to the opposite corner, and he's moonwalking into a confident three in the corner he just tried to vacate.

Being able to find Green in the same spot on every possession is remarkably valuable for a lead duo that attracts attention in the paint and often needs to look for an outlet vs. pressure. Whether that's Embiid looking for an option out of the post or Simmons scanning the floor after attacking the paint, they can hit Green in the hands with near certainty as long as the pass is where it's supposed to be.

• Maxey continues to make a case for playoff minutes with his recent play, and even if he doesn't get there, Maxey is giving them something to think about as they undergo offseason and long-term planning. On some level, his future will hinge on a familiar question: how effective will Maxey be as a shooter?

Coming into the game, Maxey was sporting an identical mark from deep (27.3%) in both halves of the season pre and post All-Star, a number that won't cut it if he's going to play a big role on this team. But there have been flashes of improvement as a catch-and-shoot guy at times, with solid form and deep-shot confidence flowing from the rookie. The head coach and the organization haven't bothered worrying too much about his touch yet, citing his work ethic and prior flashes as sources of confidence, but it has to feel heartening when he buries open shots like he did on Wednesday evening.

We've seen the impact Maxey can have as a change-of-pace guy, but that becomes a lot more valuable if teams have to take him seriously from deep. The rook should live beyond the arc in the offseason.

• The Sixers are one win closer to clinching the No. 1 seed in the East. No one will remember this game years down the road, but it could be part of the difference if they manage to make a Finals run.

• I don't want to hammer Philadelphia's defensive effort too hard because there were stretches of this game where they appeared to be using it as a testing ground for zone defense. It wasn't a terrible idea when you consider the state of their opponent. They could risk some breakdowns without risking the result, which isn't necessarily true of some of their other games to close out the year.

Still, there were some ugly possessions from the starters, who appeared to take this game about as seriously as a preseason tune-up. Seth Curry drifted through minutes at a time, Embiid dogged it on some transition plays, and even Ben Simmons went wandering on a few rotations, a rare occurrence for him this season.

Understandably, this group didn't get fired up to play a seven-man Rockets team led by Kevin Porter Jr.  Not exactly surprising, and they were able to stomp them into oblivion anyway. Nothing to get worked up about.

• I wish Simmons would take as many jumpers against even a league-average team as he does against teams like the Rockets. The more freewheeling approach in these games is pretty predictable, and there's no reason he can't let it fly more often. Live with the results, my man.

• The lineup the Rockets put on the floor was, to be nice about it, ugly. Not even Kevin Porter Jr.'s strong close to the season could make this pig look pretty.

• Why is the Taco Bell Take never a take?

If you need to get some Taco Bell branding in there for some random stat, just make up a new goofy name for it, like the Crunch-fact Supreme. It's not a take.

• Mike Scott moving to garbage time only was long overdue. Nobody needs to see him taking fadeaway jumpers from the post in meaningful minutes.