Instant observations: Sixers cough up game vs. Warriors to close out 1-3 road trip 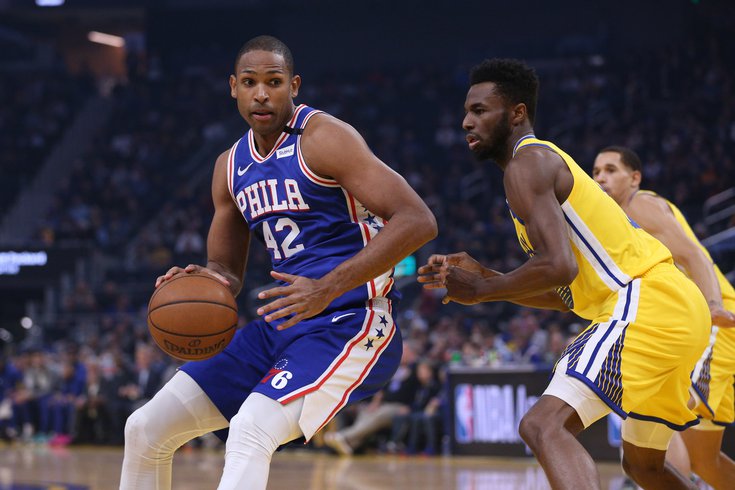 The Sixers had the good fortune to play the Golden State Warriors without Steph Curry, Klay Thompson, and Draymond Green, and they still managed to bungle the opportunity anyway, losing 118-114 to a glorified G-League team. Road Sixers, same as they ever were.

Here's what I saw, which I hope you had the good sense to miss on a nice Saturday night.

• As recently as the first leg of this road trip, Al Horford looked like he was about to be sent to the retirement home. After getting beaten by a drum by Montrezl Harrell and Anthony Davis in back-to-back games — a brutal pair that was preceded by brutal months of play — hope was fading fast.

Horford picked a good time to turn it back on, that's for sure. In back-to-back matchups where the opponent didn't have much resistance to offer, Horford played terrific on offense and reminded you of how many ways he can impact the game there. Philadelphia's spread floor has allowed his passing to become a featured part of his game again, with Horford taking touches in the post and immediately firing them to an open player on the perimeter, either for an open jumper or an easy swing pass that becomes an open jumper.

His post play has also been better, and Horford punished whoever the Warriors threw at him. Dragan Bender just didn't have the strength to deal with him, and Marquese Chriss' strength and athleticism wilted against Horford's tricks of the trade. Sprinkle in some made jumpers and you had yourself the quintessential Horford game on offense.

I'm still a bit concerned about how he looks on defense, with his reads often a step slow and Horford unable to close the same gaps he used to be able to. We can set those aside for the time being, however, since he has been asked to shoulder a reasonably heavy burden on the other side of the ball over the last couple of games. Since he has returned to form on one end, perhaps there is hope left for him after all. And unfortunately, his post play didn't amount to a whole lot down the stretch, so perhaps the above section doesn't mean all that much in the end.

But if all it takes for a player to get going is for me to write a negative article about their recent play, I will be accepting checks at any time to write mean things about your favorite players and teams.

• Even if he wasn't shooting the lights out, the poise Shake Milton has shown on this trip would be enough to make you optimistic about his future. As recently as last summer, I was ready to write him off as a point guard prospect and evaluate him as a wing after he played miserably in that role at Summer League. But his background as a point guard has really shined through recently, if not in his playmaking then at least in his composure.

Milton has done an excellent job of picking his spots, which has helped him overcome his perceived weaknesses with his handle and first step. When there is a crack to slither into, Milton has exploded through it, and when the defense isn't giving him anything, Milton has recycled possessions and found the teammate who might have the best chance to make something happen. If he lacks dynamism, he makes up for it with feel, which I would argue is much more important in the role he'll play with this roster anyway.

He still isn't exactly prime Scottie Pippen on the defensive end, but to my eye, his reads have grown a bit sharper, and that gives him a chance to make use of his length. If Milton can keep this rolling once the Sixers head home and (presumably) get healthy, it'll be the most impactful post-deadline move they've made.

• Whether it was because they felt it was a "revenge game" against their old team or just dumb luck, the former Warriors players were both pretty good on the road Saturday night. Alec Burks and Glenn Robinson III bring very different things to the table, and the Sixers needed significant contributions from both guys to get it over the line on Saturday.

Now that his threes have started dropping, Robinson III has become a lot easier to appreciate and his role has been easy to figure out. His play in transition has helped him get by in the meantime, but with Robinson III now an asset in the halfcourt and in transition, the bench units look far more cohesive than they did before this trip began.

What Burks brings to the table is a little more novel, at least for a Sixers team that has ignored guard skills for what seems like most of my life. Being able to put a guy in pick-and-rolls who is a confident shooter/scorer at all three levels is something every other NBA team has been capable of for a long time, but the Sixers have been way behind the times. Yes, there are going to be some bad, early-clock shots that Burks forces up as a result, but there are also possessions where those early-clock looks are the best shots you're going to get, and the Sixers have rarely had guys who even thought about attempting them.

• Two nights after dominating the Sacramento Kings on the road, there looked to be no reason Tobias Harris couldn't duplicate the feat in San Francisco. With Draymond Green out, Golden State's perimeter defensive options aren't exactly top-notch, and Harris tried to attack mismatches early and often.

Early on, that logic didn't hold up. The always puzzling Andrew Wiggins had one of his 10 games per year where he cares about defense, and he made Harris fight for every inch he tried to take inside the paint. When Harris was fortunate enough to force a switch, Marquesse Chriss used his athleticism to bother his attempts at the rim, with many of them bouncing harmlessly off of the rim and into the arms of a Warriors player.

Though Harris would eventually get going late in the game, the full 48 minutes was a classic example of Harris' limitations as a go-to scorer. Possessions that should have been Harris trips to the paint were harmless kick-outs and resets, and Harris would end up wasting a lot of the shot clock trying to find perfect shots from the mid-post. If he was an elite enough shotmaker or ballhandler, that wouldn't matter, but he doesn't have the chops to dig out of the holes he creates for himself.

There's a reason he hasn't taken as much heat as Horford — even his up-and-down games have stretches of pretty good play. But his weaknesses matter a lot because of what they need him to do for this team.

• Matisse Thybulle has had some under-the-radar issues with cheating away from his man recently. Thybulle helping away from his man to try to force turnovers is not exactly new, and the Sixers have tried to encourage him to find a middle ground between overzealous gambling and conservative defense. But without the benefit of playing alongside elite defenders like Joel Embiid and Ben Simmons, Thybulle's mistakes have a much smaller chance to be made up for by someone else.

A couple of months ago, I would have written Thybulle's name in permanent ink in the playoff rotation. I still ultimately think he will have a spot, but the picture is a little more crowded now — Shake Milton has been a big boost on offense, Alec Burks and Glenn Robinson III are settling in, and the other five guys are nailed on. The rookie is contributing with offensive rebounds and improved timing on cuts, but the next month-and-a-half is important for him. The coach isn't giving him heavy minutes in spite of major injuries, and I would venture a guess that it starts on defense.

• For the record, Furkan Korkmaz's defensive issues are a much bigger deal as it pertains to the playoff rotation. He compounded a poor shooting night by getting absolutely roasted for stretches of Saturday's game, and some of his worst habits (like stepping out of bounds) shined through in a ragged fourth quarter.

Despite the issues I had with Thybulle on Saturday night, it seemed completely inexplicable that Korkmaz would be the guy to get minutes for most of the fourth quarter, especially as he continued to get picked on by anyone he was attempting to guard. Brown has a quick hook for certain guys on the team, particularly his backup big men, but for some inexplicable reason couldn't grasp that it wasn't Korkmaz's night, right down to the game's most important play — which ended with him stepping out of bounds, naturally.

And that wasn't the only questionable rotation decision Brown made on Saturday night. It may seem like nitpicking, especially because Raul Neto was actually pretty good on Saturday, but Neto played more minutes in the first half than Milton did. When the Sixers end up losing in that tight of a game, marginal decisions like that are going to be scrutinized and matter a whole lot more.

The coach bungled this one. Pretty simple. He's not going to return home to a warm Philadelphia reception.

• On the whole, I thought this was a good trip for Mike Scott after most of us assumed his time in the rotation was up. But this game showed a lot of the limitations of playing Scott as a small-ball center. With Scott trying to play rim protector, the Warriors kept sending Chriss right down the lane at him, and Scott does not have the hops or the length to protect the rim against a guy like Chriss.

Even beyond that, I just don't trust Scott's instincts on the defensive end in any sort of high-leverage situation. The call on him by Scott Foster in the final minute may have been soft, but he should never be putting himself in that position to begin with. There are just too many awareness mistakes made by a guy who has been in the league for as long as he has.

• I hope none of us have to watch Sixers-Warriors games in the future that don't involve Steph Curry, Joel Embiid, Ben Simmons, Klay Thompson, and Draymond Green. This should be one of the events of the year on the Sixers' calendar. Can't say it lived up to that billing.