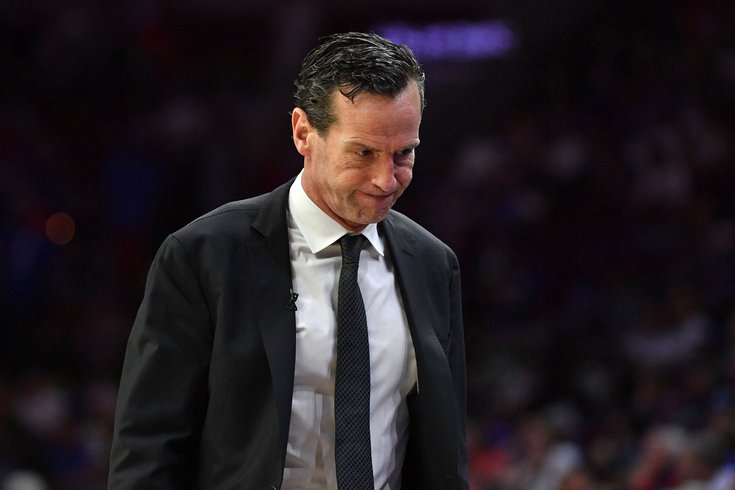 To the shock of many on Saturday morning, the Nets "mutually parted ways" with head coach Kenny Atkinson. Twenty games from the end of the regular season and sitting comfortably in the seventh spot in the Eastern Conference playoff race, Brooklyn decided to move on from their leader during their lean years anyway.

Sixers fans have become at least somewhat familiar with Atkinson in recent years. His guards, Spencer Dinwiddie in particular, have often tortured Philadelphia in the regular season, and respect for the former Nets coach is fairly high league-wide after the job he did to navigate them through troubled waters from 2016-19. While this wasn't a shocking move in league circles, it's one that looks a little strange publicly with Kyrie Irving and Kevin Durant having missed most and all of this season respectively.

And since so many of you have tweeted at me that the Sixers should hire Atkinson this summer, it felt right to offer a few thoughts on some lessons to reflect on in the aftermath of his firing. We will get to his theoretical candidacy eventually.

A team's culture is only as strong as its best players

The Brooklyn Nets have been one of the best stories in basketball over the last couple of seasons. In many circles, they were painted as a more wholesome version of the Process-era Sixers. Depleted of assets following their disastrous trade with the Boston Celtics for Paul Pierce and Kevin Garnett, Brooklyn climbed back to relevance with smart moves around the margins without resorting to all-out tanking  — mostly because tanking had no value to a team that didn't own its picks.

Atkinson was part of the reason the Nets were able to get things pointed in the right direction. GM Sean Marks took calculated risks on talents who were undervalued for various reasons, like Caris LeVert (health concerns) and D'Angelo Russell (let's call it "maturity"), and Atkinson brought those guys along in terrific fashion. His teams bought in, played hard, and ultimately exceeded expectations, low though they may have been.

When the Nets secured Kevin Durant and Kyrie Irving in free agency last summer, the expectation was that Brooklyn would be able to just absorb these two massive figures into their program and keep chugging along. Reality has looked a bit different. Durant offered up an Atkinson endorsement when he arrived and has mostly worked quietly in the background to return from an Achilles injury, but Irving's brand of faux intellectualism and teammate blaming has continued without a hitch.

Regardless of what you think about Irving or Durant as personalities, their resumes speak for themselves. When you produce and succeed at the levels they have, ego is coming along with them (and justly, I should add). The NBA is driven by talents like them, and players have never been more aware of that than they are right now. The moment Brooklyn committed to bringing that duo in, they committed to being the organization that caters to Durant and Irving, for better and/or for worse.

The Sixers, if you need reminding, are led by a pair of players whose resumes are significant even if their playoff exits have frustrated Philly fans. Not many early-20s duos win 50+ games in their first two seasons together, make All-Star teams, and earn All-NBA and All-Defense nods. They joined an organization with a long history of mediocrity coming off of a historically bad (if intentionally bad) run and immediately made the franchise relevant again. And one of those players, it's worth noting, picked up the sport as a teenager, took two seasons off due to injury, and was still one of the best players in the world the moment he took the floor for the first time. Ego comes with the territory.

As the Sixers have made the leap from plucky upstart to a potential contender, there have been a lot of questions about things that were taken for granted during the lean years, basic things like playing hard for 48 minutes for all 82 games. Coaching certainly is not blameless here, but it all ultimately has to start with the team's best players, who set the tone between the lines, in the locker room, and in public. Going from a group of guys happy just to be in the league to a star-studded roster is a major organizational shift.

Former Sixers player JJ Redick laid out the responsibility of the players better than I can in a story written by ESPN's Jackie MacMullan last season, describing a conversation he had with Embiid after the big man made off-color comments about his role:

"You're a top-five talent," Redick continued. "You can do and say whatever the f--- you want, but should you? You and Ben [Simmons] want to be the face of the franchise -- and there's obviously some leeway you get because of that. But you also have a responsibility to your teammates and your coaches to accept leadership in a mature way." [ESPN]

While Simmons has led by example on defense this season, Embiid has turned from a player whose competitive motor was constantly running into a guy who flips the switch on and off depending on the situation, the opponent, the number of touches he's getting early in games. When your best player is signaling to the rest of the group that only some games and situations are worth his time, it shouldn't be a surprise when a talented group ends up losing games they're supposed to win and struggling on the road.

You can get the best out of players by putting them in ideal situations and sets, you can find managerial leaders whose voices connect more with the types of personalities you have at the top of the roster. But you can't fundamentally change who people are. That's a lesson the Sixers should have learned during the Jimmy Butler experiment, and it's one they need to be keenly aware of with their stars moving forward.

Moves that seem easy to make from the couch are not as simple as they seem when you are sitting in the NBA head coach chair, dealing with multi-millionaires whose presence on the team might be the result of different, unseen power dynamics.

When Irving and Durant made their commitment to Brooklyn last summer, they came with a third big name: center DeAndre Jordan. Many laughed at the idea of Jordan being the third guy in a "big three," as he has always been levels below the other two and has declined in recent years, but Jordan was firmly part of that package deal.

In the hours following Atkinson's firing, ESPN's Zach Lowe recorded a podcast with colleague Kevin Arnovitz, in which Lowe discussed the potential impact of Atkinson's rotations as it relates to that dynamic:

But I do think there was a sense of these three guys came, they did come to play together, Durant, Kyrie, and DJ, and DJ coming off of the bench limits how much they get to play together, and I don't think that's quite what was envisioned by anybody. Even if none of the three principals are like out and out mad about it and out and out agitated about it, I think it's one of those things that everyone feels is like, the media is going to keep asking questions about it. It's just going to be a topic that keeps coming up. [The Lowe Post]

It is very silly on the surface, right? Jarrett Allen is younger and outright better than Jordan at this point, and deserves the starting role he has had in Brooklyn. But nepotism or favoritism is a factor in every facet of life, in business, in politics, and certainly in sports. Hell, many of you probably captained a pickup game in your youth where relationships took precedent over who the best athletes were.

Sometimes, coaching decisions that look silly simply are silly. Brett Brown rolling out an all-bench group in Sacramento on Thursday night, for example, was just bad management. But playing time is dictated by many factors, from how much guys are being paid to how often they show up late or unprepared for practice. Even those of us who are plugged in often only know half of the story.

The same applies to management decisions. Philadelphia's obsession with unitaskers has been frustrating over the years, particularly their obsession with putting one-dimensional power forwards next to Embiid on bench units. But how much of that is driven by Embiid's stated affinity for playing next to guys like Ersan Ilyasova? Jimmy Butler was a better player and fit than Al Horford is, but that doesn't mean all the parties involved were going to be content with the shot distribution, touches, and roles associated with running it back.

When a team you're passionate about makes a decision you disagree with, it is easier to believe it is a mistake of malice or incompetence. The truth isn't always different, but it often is.

No, Atkinson is not the guy if Philly moves on from Brett Brown

Great developmental guy. Questions about his rotations. Late-game execution struggles. Doubt over whether he can be the guy who makes the leap from a developmental coach to a title-winning leader. All of these things are potential descriptors of Atkinson that apply equally to Brown. Why trade in one version for a guy who failed at the same things you claim Brown should be fired for?

If the Sixers move on from Brown this offseason, there are really only two styles of candidates you'd be taking a look at:

Atkinson doesn't really fit in either of those categories. The Nets weren't exactly an imaginative offensive team at any point during his tenure — they were a top-10 team in pick-and-roll volume last year and a top-10 team in pick-and-roll volume this year, and this season their efficiency is in the bottom-10 on those plays, only barely better than Philadelphia's. Even with Durant sidelined for the year and Irving missing significant time, Atkinson fell short of getting the buy-in the coaches in the second box need to succeed. He is a good coach with obvious question marks who appears to be best suited as the leader of an up-and-coming team.

That's not an argument to keep Brown, rather an illustration of what the coaching market actually looks like. You will see a lot of adulation of Atkinson, who will likely have his share of offers this summer, but you have to actually understand what a potential coach is bringing to the table, instead of just seeing a name you like and going, "Hey, that guy is good because I've heard of him, he would definitely be the best option." This lesson should have been learned years ago in Philadelphia when the vast majority of the city (myself included) sneered at the Eagles hiring Doug Pederson, viewed as a backup plan and later a potential buffoon after his opening presser.

Would Atkinson be a bad theoretical coach in Philly? Certainly not. And as an added bonus, I'm sure the local media would be accused of giving him preferential treatment because he's a nice guy, as we are accused with Brown. But if you decide to make a coaching change, the goal either has to be to shoot for the moon or fix some of the issues you claim are plaguing the team. Inheriting the same questions with no new answers isn't going to get it done.