Investigation: What kind of snake did a N.J. woman find in her toilet paper package? 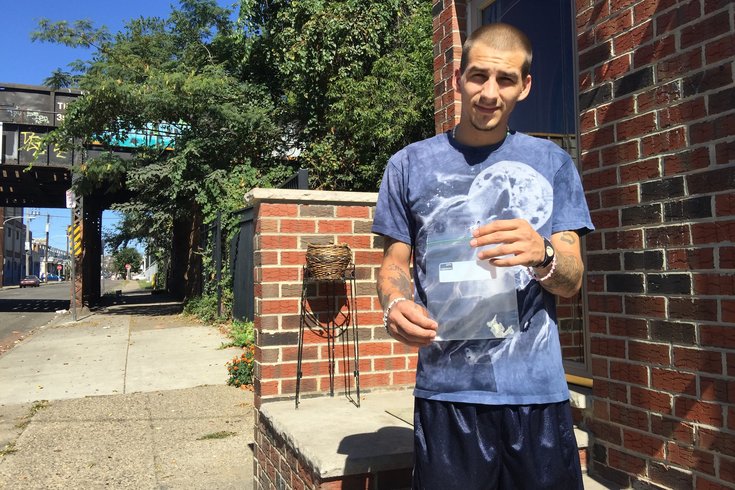 Sean Ladavich of Philadelphia Reptile & Animal Rescue & Relocation holds a bag containing the skin of a snake that apparently emerged from a package of Angel Soft toilet paper in Marlton, N.J. in September 2017.

Remember earlier this month when a South Jersey woman shared her nightmarish tale about a two-foot snake emerging from a bundle of Angel Soft toilet paper she’d just bought at her neighborhood Walmart?

Yeah, it’s the kind of story that sticks with you. Today, we have an important update to share.

No, the snake hasn’t returned to Lisa Gallo’s home in Marlton, Burlington County … though that would make for quite the story.

Instead, her son alerted PhillyVoice to the news that they had found skin that the snake had shed while inside the packaging.

Furthermore, when he alerted the good people at Angel Soft to this news, they immediately sent out a prepaid FedEx shipping label for him to send some of the skin to their offices in Atlanta for further investigation.

“They reached out a few days after your article,” said Mark Gallo, when we met him in the parking lot outside his workplace in Voorhees on Thursday morning. “We didn’t find the skin in the packaging until there were about two rolls of toilet paper left. It was stuck to the bottom of those rolls. It was a ‘holy f***’ moment.”

This is good corporate outreach, asking an aggrieved customer to provide evidence of their complaint, down to the UPC symbol on the packaging.

At our meeting, Mark Gallo also handed over three pieces of skin that he didn’t send to Angel Soft.

He has yet to hear back from the company regarding the outcome of their investigation, so we decided to delve deeper on our own. 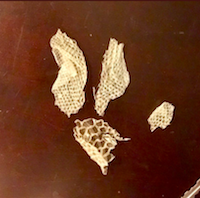 Skin that a snake had shed in a bundle of toilet paper purchased at a South Jersey retailer.

Specifically, we reached out to Philadelphia Reptile & Animal Rescue & Relocation via Facebook (after the Philadelphia Zoo didn't respond to our request for assistance. Booooo!)

If anybody could help us determine what kind of snake was in the packaging – a story about which many expressed skepticism – it was the type of folks who would set up such a Facebook page, we reckoned.

Bringing the skin back across the Delaware River after our meeting with Mark Gallo – it was in a Ziploc back wrapped in a plastic bag from a supermarket – we drove directly to Reptile Rescue’s listed address.

It wasn't an office, per se. It's a house on East Venango Street near the CSX tracks in Harrowgate, not too far from Port Richmond's northern edge, according to a Port Richmond Industrial Development Enterprise sign on the bridge next door. 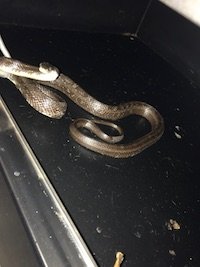 The black rat snake that Sean Ladavich recently sold to a friend.

Sean Ladavich, the 22-year-old proprietor, took mere seconds looking at the skin to know the variety of snake.

That's the common name for pantherophis obsoletus. He knew it quickly, in part, because he “just sold one the other day.”

It's a non-venomous snake that can grow even larger than the one seen by the Gallos, and it's generally found west of the Mississippi River and in the south. Speaking to the widespread nature of its range, Ladavich said they can be discovered in Pennypack Park and elsewhere regionally.

As an aside, he mentioned he feeds them rats.

“I’ll bet you 10-to-1 that one of those snakes was either in the Walmart facility or its distributor’s facilities, too,” he maintained. “It makes perfect sense. They’re common in the area.”

To be fair, Walmart maintained that the packaging is sealed before it even gets to them in the first place, so it could've come from anywhere, which is what Angel Soft is apparently trying to determine.

Ladavich is no Johnny Come Lately to the snake-identifying game, though.

He said he started this “hobby” when he was about 8 years old, posted ads on Craigslist offering snake-related services when he was 12 and “when I met my wife (Monica) four years ago, she made the Facebook page.”

“They’re not venomous, but if you catch them in the wild, they’ll start biting you." – Sean Ladavich

In fact, Monica responded within minutes of our initial inquiry, but she wasn't home from work when we got to the house on Thursday.

In any event, Ladavich said the skin was easy to identify because of the ease it is shed by that particular snake. Unbroken and intact for the most part, it's easy for the skin to be placed on finger- and toenails without taking away from the enamel, he noted. (The more you know!)

“They’re not venomous, but if you catch them in the wild, they’ll start biting you,” he maintained. “That’s what I hate about them.”

With that, Ladavich offered his services anytime PhillyVoice has questions related to reptiles or snakes (an offer on which we fully intend to take him up.)

As for the status of Angel Soft’s investigation, we reached out to the company on Thursday afternoon.

Karen Cole, senior communications manager for Angel Soft's parent company Georgia-Pacific, responded that they're still waiting for it to arrive, but they have been in touch.

"We're awaiting the requested sample of the product to be shipped to us by (Denise)," Cole said. "Based on some information we were given from the core tube of the product, the tissue was made on June 25 at one of our facilities in Alabama, 78 days from the date of manufacture to when (Denise) reported that she found it."

All of which is to say we may never know when that snake got in the toilet-paper packaging, but at least we know what type it was!