Jasper Johns exhibition to be split between Philadelphia and New York 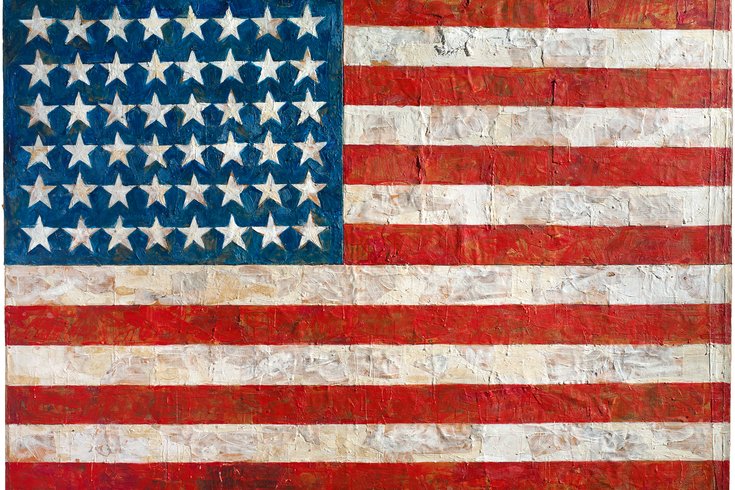 A Jasper Johns exhibition will be presented simultaneously at the Philadelphia Museum of Art and the Whitney Museum of American Art. Pictured above is 'Flag' (cira 1954) by Johns. Licensed by VAGA at Artists Rights Society, New York, NY.

A Jasper Johns retrospective will be presented simultaneously at the Philadelphia Museum of Art and New York City's Whitney Museum of American Art this fall.

Johns, an American painter, sculptor and printmaker who came onto the scene in the '50s, is well known for his depictions of the American flag.

Upon entering the exhibit at the Philadelphia Museum of Art, visitors will see "Flag" (circa 1954-1955), Johns' earliest flag painting and one of the most influential images ever produced by an American artist.

Another highlight for Philly visitors will be "Untitled" (circa 1972), on loan from Germany, which has not traveled since 1996 and will be the focus of an entire gallery.

The Philadelphia Museum of Art also will devote a section of the show to exploring Johns' enduring relationship with Japanese culture, which dates to his Army service in Japan in 1953.

"He stunned the establishment as a young man but continues to astonish audiences with surprising new ideas as he nears ninety," said Scott Rothkopf of the Whitney, a co-curator of the exhibit. "Surveying the whole of his career, we see an artist propelled by curiosity, constantly challenging himself – and all of us."

"Jasper Johns: Mind/Mirror" will be the artist's first major museum retrospective on the East Coast in nearly a quarter century. It opens in Philadelphia and New York City on Oct. 28.