WWE legend Jim Ross on Royal Rumble, the Eagles, the success of his book, and more 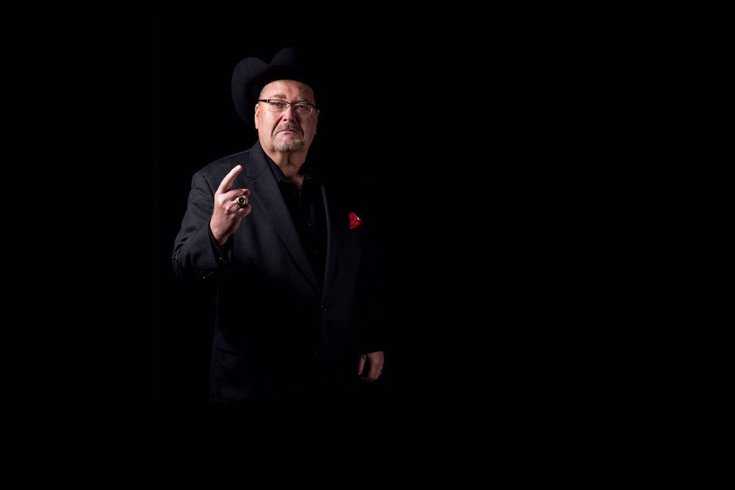 Impact Wrestling's Jeremy Borash will also join in on the fun with Ross, who says they both play off each other very well.

Tickets for this event can be purchased on Ticketfly. This is an exclusive engagement available to only 100 fans.

Ross recently spoke with PhillyVoice.com ahead of his show.

How was it decided what goes in the book?

"Well, everything in there is honest. They're honest stories, and they're stories that every fan can relate to. They're stories that are real and true and relatable. We didn't make a list of what stays and what goes. The first thing is it had to be honest and it had to fit in the process of the storytelling and I think we've accomplished that.

"We were finishing it when my wife got killed in March and it really took the air out of my sails. I almost didn't have the heart to finish my own book. But cooler heads prevailed, as they say, and I was able to finish.

"We took the obvious chronological route, and when we do our sequel, which we will do a second book, we hope that it will pick up right where Slobberknocker left off after WrestleMania 1999. A lot of really unique times, things, places, people, happened post-1999. The Monday Night War, WCW stuff, Attitude Era, WWE going public, the XFL, all kinds of things. And, of course, my own personal issues: I had another bout with Bell's Palsy, I lost my wife, so there's a lot more to come. It's got to have a theme, got to have a direction, it's got to have a purpose, and of all, my wife and I talked about this at length during the process, it has to be honest so people can identify with J.R. so to speak."

One of my favorite parts of your book is when you talked about Randy Savage, who's one of my favorites of all-time. Are there any more stories about Savage you can share that you didn't share in your book?

"Not really. With all of his amazing in-ring talent and charisma, he was a great pro wrestler, no doubt. But just as a regular guy, he never seemed like he was very trusting. It's hard to walk around every day in virtually every environment that you place yourself in and not be trusting to some degree. And I always thought that was problematic for him. I'm sure that if he could have controlled that urge, that mood better, he would have. It's just his personality. It doesn't make him a bad person. I didn't have great experiences with Randy, but I certainly have never declared the ridiculousness of saying he wasn't a talented guy, he was really talented. Very unpredictable, had a unique delivery, had a good head for the business, but to really do that job out there, you've got to absolutely trust your partner. And everybody I've worked with and worked with Randy would say the same thing. He was really different in that regard. But, anyway, he was a talented guy and our personalities just didn't mesh well. It wasn't a big deal. It happens every day. Not an issue."

What's the timeline for the release of the second book?

"The ever-moving, ever-evolving deadline would be to have it ready for retail in the holiday season of 2019."

How are you able to be so loyal to WWE given your tumultuous past with them?

"People have a different perception of this than I do. Life is way too short to worry about some of those experiences in my way of thinking. And there are things in my life that have happened that are a whole lot more significant and important than my reaction as to when I got let go or terminated.

"I had strong opinions, I wanted to change the world, revolutionize the business, all these glorious images in my head, so I wasn't the easiest guy in the world to manage, either. So, if I had some of those situations with somebody else under my watch, I would've fired me, too. Second thing is, Vince [McMahon] kept his word with everything he's ever told me. All my financial dreams were achieved thanks to my working in WWE. So, I'm very grateful for my situation there whether I'm part-time, full-time, or no time. I don't see any other way to react and I don't know why I would react any other way. That's just me, man. I've had great experiences there and at 66 years of age, I'm still enjoying my relationship with WWE. I have no bitterness whatsoever."

What are your thoughts on the upcoming Royal Rumble weekend events?

"I think the unpredictability with both Rumble matches really makes it intriguing for Sunday, for sure. I applaud the addition of the women's Rumble. That's a great idea. Everybody should have an opinion as to who's going to win, but I don't really have a dog in the hunt right now. I think it's wide open on both sides, so I like that on Sunday. I'm sure there will be some surprises in the Rumble both on the male and female side, that's always good. Those are hard matches to call because the story changes every minute or so with the additions and eliminations.

"As for the NXT TakeOver show - I've been able to call some matches with those and I have just enjoyed the heck out of it - it just seems that brand has a different mindset than the WWE brand. Don't get me wrong on that, too, it has to do with the personality, or the mindset more specifically, of the athlete. So Saturday night will be good without a doubt. But, you know, I'm geared up for my thing on Sunday. I might slip in and watch a little bit of the TakeOver show from the shadows and enjoy the matches, but I'm planning on coming home after my show. I'm not going to go to the Rumble, but I'll watch it on the WWE Network when I get home."

How did you like being at the Manhattan Center for RAW25?

"I had a great time. When people read this, they're going to think, 'Well, how can J.R. say that he had a great time because of the controversy surrounding the presentation?' I looked at is as going to a family reunion or class reunion, and you know at your class reunion, you've got all kinds of crazy classmates and you love to see them every now and then. That's kind of how we all - we had a small crew at the Manhattan Center - so everybody got the chance to have plenty of time to visit and see how everyone's doing and all that good stuff. It was very entertaining and very good for all of us.

"You just can't take for granted that you're going to be there next time. I said on my podcast tomorrow isn't guaranteed, and it certainly fit true on Monday in New York City. You know, as a broadcaster, I would have loved to call more matches. Of all the things I've done in wrestling, broadcasting and doing play-by-play is my favorite. So why wouldn't I want to do more of what I believe I have the most fun doing? That's how I looked at it. But it was a great day, you know, we were treated good at the hotel, the stuff us old guys like catering was good, no travel issues. It was a good trip and I was happy to be invited. And it was good to catch up with as many of the guys as I did.

"I was happy to call - I'm a big fan of Matt Hardy and Bray Wyatt, both of those kids, kids to me - and I got to call that match. That was kind of neat. That tag match was kind of short, it was kind of backloaded. The Undertaker's promo. So, you know, it's just what it was. It's no big deal. Some people are hell-bent on finding something to bitch about. I can't find that, I don't have that in me. It's not how I feel. I went there for a different reason than people watching it on television or watching it in the arena. I went to work. And as a worker, so to speak, I'd like to have done more work. That's all. Chalk it up to ego or whatever, but I would've liked to have done more work because it's the most fun thing I do. And if people can't get that, then they're just not paying attention and I can't help you."

What are your thoughts on the Eagles vs. Patriots in Super Bowl LII?

"Here's always been my philosophy - all the time I was married to my wife, she was a Steelers fan. Grew up in Pittsburgh, got a lot of Steelers stuff here in my house. There's just no damn way if you're a Steelers fan anytime in your life that you can ever cheer for the Patriots. So, I would not feel like I was honoring my wife's memory very well if I cheered for the Patriots. But the other aspect of that is, is that the Eagles – I'm more of an NFC guy than an AFC guy quite frankly – and big Lane [Johnson] playing tackle and doing a hell of a job, by the way, that's my dog in the hunt. He's my "Big Dog" in the hunt, so I'm going to be cheering for the Eagles and it'll be great to see a Sooner win a Super Bowl ring. That's about as transparent as I can get.

"It's all about the lines of scrimmage, offense and defense. That's the whole ball game. The Foles thing is overthought. He's a good quarterback and he's not playing by himself. He won some games down the stretch that they needed to win, so I'm not worried about the quarterback play. I think the game is won and decided at the line of scrimmage, and I just think the Eagles have the advantage in that area."