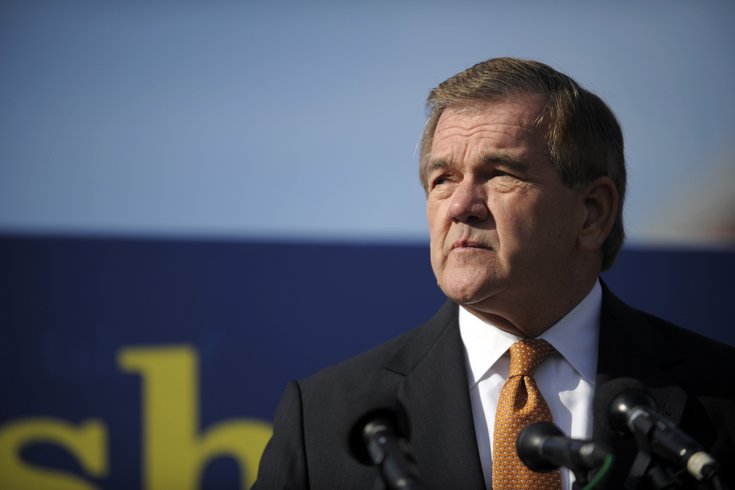 'For me, voting is not just a privilege, but a responsibility. And this year, I believe the responsible vote is for Joe Biden,' former Pennsylvania Gov. Tom Ridge writes in an op-ed endorsing the Democratic nominee.

Longtime Republican Tom Ridge says he'll be voting for a Democrat in the presidential election for the first time.

The former Pennsylvania governor endorsed Joe Biden in an op-ed published in the Inquirer on Sunday, urging residents to join him in rejecting President Donal Trump in November's general election.

"So here we are in 2020," Ridge wrote. "And do we ever have complex problems that demand thoughtful, intelligent leadership. We are getting none of it."

The ongoing COVID-19 pandemic has many similarities to the September 11, 2001 terrorist attacks, Ridge wrote. But he said Trump's response to the public health crisis lacks the presidential leadership former President George W. Bush exhibited as he handled 9/11.

"Donald Trump has proven over these last four years he is incapable of such leadership," Ridge wrote. "It is not within him. He lacks the empathy, integrity, intellect and maturity to lead. He sows division along political, racial and religious lines.

"And he routinely dismisses the opinions of experts who know far more about the subject at hand than he does — intelligence, military and public health. Our country has paid dearly in lives lost, social unrest, economic hardship and our standing in the world."

Bush tapped Ridge to lead the newly-formed Department of Homeland Security in the weeks following 9/11. Ridge was serving as Pennsylvania's governor at the time. Prior to that, he served in the House of Representatives for 12 years.

Ridge slammed Trump's claims that mail-in voting will result in a fraudulent election.

"Can you imagine the hubris? Can you imagine any other president in our lifetime — or ever — saying something so dangerous and un-American?," Ridge wrote. "We are in the midst of a health crisis, when we should be doing all we can to help citizens vote safely, yet he continues to cast doubt on the sanctity of the vote."

Ridge acknowledged that he will not agree with every policy rolled out by a potential Biden administration, but he pledged to speak out "with civility and respect, not with childish name-calling and Twitter tirades."

Despite any disagreements, Ridge wrote that Biden "absolutely must be America’s next president."

"So much is at stake," Ridge wrote. "For me, voting is not just a privilege, but a responsibility. And this year, I believe the responsible vote is for Joe Biden. It’s a vote for decency. A vote for the rule of law. And a vote for honest and earnest leadership. It’s time to put country over party. It’s time to dismiss Donald Trump."

Polling indicates that the race for Pennsylvania will be close. Biden currently leads Trump by an average of 4.7 points, according to Real Clear Politics.