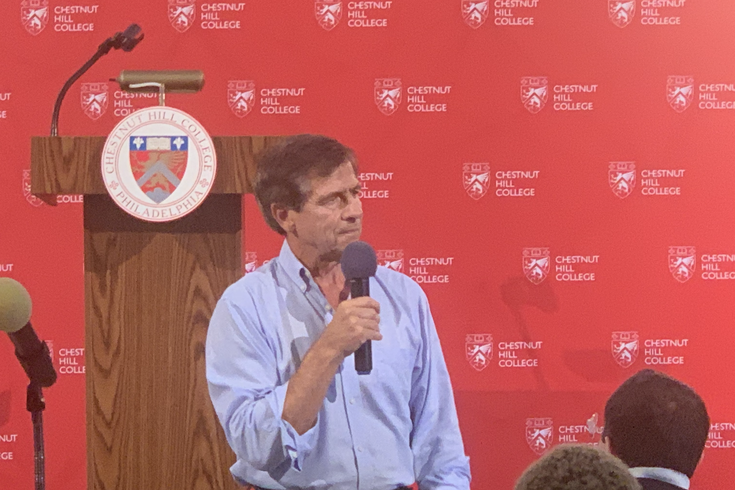 Former U.S. Congressman Joe Sestak isn't among the most prominent Democrats running for president in the 2020 election, which is to be kind. Despite his local roots and name recognition, he's still miles behind the other local "Joe" in every poll.

Setask is polling at 0% in most primary analyses. His best showing is .3% in the compilation of polling data tracked by RealClear Politics.

But anyone familiar with Sestak's career knows he is not intimidated by an uphill climb, and he also doesn't listen when people tell him what can't do.

On Monday morning, Sestak spoke at Chestnut Hill College's St. Joseph Hall about his plans for the campaign and made the case for why voters should choose him for president.

"I am running not for any special interest," Sestak said in his speech. "I am running because this nation of ours needs someone who they believe they can trust – above party, so that we can unite this country. There's no other way we'll defeat the challenges of the world."

Those challenges, which he focused most on during the speech, include climate change, health care, and the need for job training and re-training by those who have been left behind by today's economy.

Sestak, who spent more than 30 years in the Navy and retired as a three-star admiral, talked about his appreciation for youth, noting the average age on Navy aircraft carriers – like the one he commanded during combat operations in Afghanistan and Iraq, is 19.

"If anyone doesn't think the youth is America is great, come aboard," he said.

Sestak entered the presidential primary race late, announcing his campaign toward the end of June, which may have contributed to his invisibility in national polls so far.

"I was actually going to take a (private sector) job, I wasn't going to get back into politics, but then my daughter's brain cancer came back," Sestak explained during an interview after the Chestnut Hill speech. "So during that time, as I turned down the job and thought about it, I noticed an absence, of someone on the stage who can actually unite this country ... There was also an absence of somebody who really had a depth and breath of public experience, that could actually make sure that we reconvened our leadership, and also reconvened the world under our leadership."

He also noted that "we have people running" who voted for the Iraq War, a reference to Former Vice President Joe Biden who was a longtime senator from Delaware prior to becoming part of the Obama administration.

The Democratic National Committee is using a formula involving poll positions and fundraising totals to determine candidates that qualify for the presidential debate stages during this election cycle. Sestak has not qualified to date.

Other candidates have complained the party's setup is unfair, but Sestak hasn't.

"I'm of the belief that if you land on the beach from the LCM – landing craft – you don't go on the beach, find the rules aren't what you like, and then all of a sudden you complain and you walk back on," Sestak said, using a Navy analogy. "You get out there and you gotta accept what they are."

He did add that he'd be in favor of changing the rules in the next cycle.

"You can have a billionaire drop in X amount of money and get 130,000 signatures, and others put tons of money into social media … Is that support? Usually when you put money as an indication of something, there's loopholes, and ways to get around it."

The now 67-year-old Sestak first entered politics in 2006, when he successfully challenged incumbent Republican Rep. Curt Weldon in what was then the 7th Congressional District, which covered most of Delaware County and parts of Montgomery and Berks.

Sestak, a graduate of Cardinal O'Hara High School in Delco, The U.S. Naval Academy and Harvard, held that seat for four years, and was the highest-ranking military officer ever elected to U.S. House of Representatives at the time.

Next, he mounted two unsuccessful campaigns for the U.S. Senate, in 2010 and 2016. In the first one, he defeated longtime incumbent Sen. Arlen Specter in the Democratic primary (Specter, a long time Republican had switched parties) before losing the general election to Pat Toomey. Six years later, Sestak ran again for the same seat but lost the Democratic primary to Katie McGinty, who went on to lose to Toomey, as Donald Trump won Pennsylvania on his way to the presidency.

Sestak was asked how the Democrats could put Pennsylvania back in their column in 2020.

"The way forward is to do exactly what I did when I ran. I walked across this state – 422 miles," he said. "That person who is running, has to have demonstrated in their past as they executed … in a campaign here, that I'm for you, above my party." He noted that the Democratic establishment tried to push him out of the 2016 Senate race.

"You want to win Pennsylvania? It's a purple state," he said. A successful candidate needs to be able to relate to the state's rural and suburban areas, "and understand them and demonstrate 'I'm for you, above anything else.'"

On specific policy questions, Sestak supports a gun policy with a renewed assault weapons ban, closing the gun show loophole, and universal background checks. His military experience means he has a great deal of experience with guns – he spoke wistfully of shooting guns on Sunday afternoons on Naval ships.

But Sestak considers such measures "common sense," and said he'd be willing to walk through a gun show and say so. The Democrat touted his F rating from the National Rifle Association, he noted that he's known Oliver North, the Iran Contra figure-turned-conservative stalwart who was until recently the NRA's president, for decades, going back to their days in the military.

On health care, Sestak supports a public option, for which he voted during the original deliberations of Obamacare when he was in the House, and also supports a path towards a national health care system. But he does not support "ripping it out, in two-to-four years," especially not while his daughter is battling cancer.

And while Sestak did not mention any of his Democratic opponents by name and barely touched on President Donald Trump during the speech, he told PhillyVoice he supports an investigation into the recent reports, the subject of a whistleblower complaint, about the phone call between Trump and the president of Ukraine.

"If the commander-in-chief, who occupies the presidency," Sestak said, "reaches out to a foreign government to interfere with the blessed sanctity of a free and fair election, then the Congress should upon review, then do an investigation if it merits it ... We need to know what actually happened, but the fact that he talked about it, there needs to be an investigation."

The Sestak speech was the first of a planned series of events with candidates at Chestnut Hill College, which the school expects will ramp up as April's Pennsylvania Democratic primary nears.