Joel Embiid has yet another backup center... so who was his best? 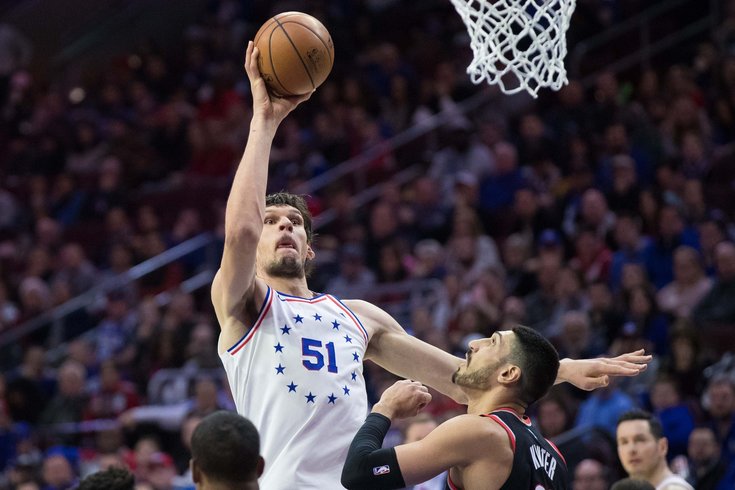 Last Thursday, the Sixers traded away backup center Andre Drummond as part of their blockbuster deal to land James Harden and jettison Ben Simmons — which meant that Joel Embiid would need yet another backup center.

Embiid has been relatively healthy — and the NBA MVP — so far this season and the Sixers should genuinely be elated by that. However, Embiid is a big man with a big injury history, one who has never played more than 64 games in a season and who has missed considerable playing time over his seven year NBA career.

There has been a revolving door of backups for Embiid, some pretty ill-conceived (it's still hard to understand how Al Horford was supposed to work) and some set free before their time (like Richaun Holmes). But in between there have actually been some fan favorites backing up the big man.

Props to Paul Reed for doing the job over the last two games for the Sixers, pulling in seven boards and adding six points in each game over about 14 minutes per. Will Reed continue to play the role? Will one-time All-Star Paul Millsap be the new backup center? Or will someone on the buyout market emerge as the guy down the stretch?

Or will it be 6-foot-2 guard Tyrese Maxey?

“I’ve always said I’m adjustable," Maxey said. “And at the end of the day, I have one goal and that’s to win. So whatever coach asks me to do — stay on the ball, play off the ball. If he asks me to play center for Joel, just to sit Joel for a little bit, then that’s what I’m going to go out there and do.”

Only the next few weeks can answer those questions. But for now, let's take a look back down memory lane at Embiid's understudies. The rankings below are based on a combination of their skill backing up Embiid, and the impact they made on the franchise and the fanbase.

Drummond signed with the team this past offseason and was very good when he got to start — to the tune of nine points and 14.3 boards, but limited time relegated him to five points and seven rebounds a game in the Sixers' second unit. He played with high energy and was a budding fan favorite. And was a favorite of Joel Embiid too.

“[Andre Drummond] was as good as any backup that we’ve had in Philly since I’ve been here. So, you know, it sucks to lose him," Embiid said after the recent trade, "but you know it’s James Harden and he is one of the best players in the league, MVP. I’m pretty excited.”

The fact that Howard was able to muster seven points and nine rebounds per game in roughly 17 minutes per game during his season in Philly was impressive. He went hard, and though he was frustrating at times, he led the frosty freeze-out rooting brigade with gusto. He is a future NBA Hall of Famer who brought some leadership to a team that went through a few rough stretched during his short tenure.

Holmes was a bit of a gem, drafted in the second round by the Sixers under Sam Hinkie. He was a fan favorite player who gave a ton of effort and was a pretty good defender too. Holmes played in 156 games over three seasons, starting 20 times and playing most of his minutes at center behind Embiid. He needed more minutes than he had, but the flashes he showed are good enough to land him third on our list. Since being traded to the Suns in 2018 for what basketball reference literally lists as $1M in cash, he's started 140 games and has averaged 11.3 points, 6.3 rebounds and 1.4 blocks per game. He's become a reliable NBA starter for the Kings and might be the "one who got away."

It really feels like Horford was a Sixer for more than just that one season. He scored around 11 points, four assists and seven rebounds per game overall, and 15 points, 7.2 rebounds and 4.8 assists when starting without Embiid in the lineup, which he did 21 times. The numbers were fine. The contract was not, nor was the fit, and he was promptly sent packing when Daryl Morey was hired in 2020.

The Bobi and Tobi era of Sixers basketball was really fun, even though Marjanovic played just 22 games for Philly with just three of them coming as a starter — though he also played in 11 playoff games. As a 76er he averaged 8.2 points and 5.1 rebounds per game, numbers that are actually each career highs for the reserve 7-foot-3 man from Serbia. Fans and his best friend Tobias Harris were sad to see him leave for the Mavericks in 2020.

Noel, like Okafor, was an integral part of The Process and was actually drafted before Embiid was. Noel was a lights out defender who could finish a lob as good as anyone, routinely posting double doubles in two seasons pre Jo-Jo. But in 2016-17 he was traded to the Mavs for Justin Anderson and Andrew Bogut (who was waived). Noel has carved out a niche as a reserve big man who can play with energy and play as a slot starter for Oklahoma City and the Knicks in recent years.

Okafor was the third-overall pick the year after the Sixers took Embiid and his very inclusion with the Sixers was the subject of confusion. The team was trying to roll with three big men (Nerlens Noel was drafted prior) but Embiid and Okafor only ever played together in 20 games, with Okafor relegated to just nine points and 4.5 boards in those contests. Okafor was good as a rookie, averaging 17.5 points and seven rebounds per game but his numbers dipped in 2016-17 with Embiid returning from his two year injury hiatus. He was almost a non-factor the following season before he was traded to the Nets for Trevor Booker. Okafor was a key figure in The Process.

Johnson never played in the NBA again after his stint with the Sixers. Brought in to back up Embiid and provide a little defense following a couple good seasons in Boston, Johnson appeared in 125 games for Philly with 24 coming as a starter at center. He never scored more than 16 points as a Sixers and was pretty forgettable.

Bolden was a promising and fun player to watch over parts of two seasons in Philly but never really put it together, despite making a bevy of highlight slams and blocks. He had a career high 19 points in a game with a fun lineup, starting alongside Ben Simmons, Jimmy Butler, J.J. Reddick and Tobias Harris in March of 2019. He was waived in 2020 and only played three games for the Suns before being out of the NBA.

O'Quinn played 29 games for Philly two seasons ago and didn't really have a whole lot to offer other than looking cool in his short shorts and giving a bit of hustle. He's out of the league now.