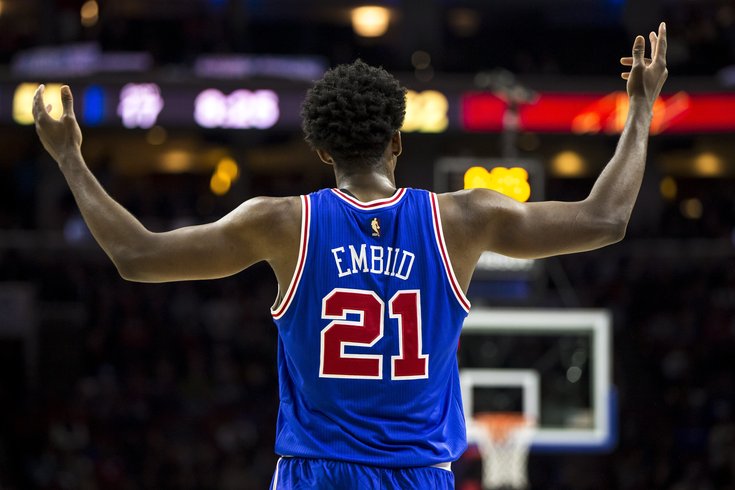 Will Sixers center Joel Embiid be the 2016-17 NBA Rookie of the year despite playing in just 31 games?

The Sixers are a lot more fun when Joel Embiid is in the game. That’s an indisputable fact. He’s single-handedly making the Sixers great (to watch) again, as was evidence in the team’s 102-101 loss to the Cleveland Cavaliers.

The problem for fans, however, is that he’s been on a minutes restriction this season — don’t get me wrong, that’s 100 percent the correct decision by the team. Through his first five games of the season, Embiid’s yet to play more than 25 minutes; he also isn’t playing both ends of back-to-backs, or at least not yet.

But when he is in the game, the Sixers go from barely watchable to can’t-miss theatre.

On Saturday night, in front of a sold-out crowd that included Ryan Howard, Meek Mill and Nicki Minaj, the 7-foot-2 center did not disappoint.

They were likely there to see LeBron James and reigning NBA champions, but the Sixers and their star rookie put on a show of their own for the 20,497 in attendance, overcoming an 18-point deficit to nearly upset the undefeated Cavs.

There was a lot to like from the home team, but it was far from perfect, especially late. Each of the Sixers’ final possessions resulted in turnovers. That included their final possession, on which they failed to get a shot off despite having two timeouts to draw something up. It was an ugly finish.

But it was a great game; they were in position to hand the Cavs their first loss of the season. The arena was packed. And for the first time since I’ve been covering the Sixers, I had to stand for portions of the fourth quarter in order to see over a crowd that was simply too amped up to sit down.

And for those upset over the fact that Brett Brown’s team still doesn’t have a win, I hear you. But just remember a few things first. Two of their best players, Nerlens Noel and Ben Simmons, aren’t out there. Their other two best players, Embiid and Jahlil Okafor, are on minutes restrictions. And in the case of Embiid, we’re talking about a guy who had only played 28 games above the high school level prior to this season and none in the last two and half years.

That's what makes Embiid’s first four NBA games all the more impressive. In scoring a career-high 22 points against Cleveland, the 22-year-old center put it all on display. But, much like his team’s overall performance, an otherwise perfect night at the Wells Fargo Center was marred by some late-game turnovers and, ultimately, a loss.

“He’s a big boy; he’s a big boy," James said when asked to assess Embiid. "We’ve got quite a few in this league, and he’s up there. He’s a really good talent."

Still, it was fun* while it lasted. Really fun.

*Before you say, “But, Matt. You’re supposed to be an unbiased reporter. Sure sounds like you’re cheering for the Sixers!” — it was fun in the way any close basketball game in that kind of atmosphere is fun. I’m not a robot. And there was a 7-foot-2 guy knocking down three after three. You know what? I’m don’t need to explain myself to you.

But we’re just going to focus on the good from here on out because, given Embiid’s (lack of) experience and the amount of time since he’s last played, we should be far more impressed with what he’s been able to do than we should be disappointed in what he hasn’t.

There’s only one place to start when talking about Embiid’s game Saturday night. That’s right, it’s the block you’ve been watching on Vine all night.

JOEL EMBIID JUST DESTROYED LEBRON'S SHOT SURE THIS IS CLEARLY GOALTENDING BUT THEY DIDN'T CALL IT https://t.co/J3sLZrGtvd

"Yeah, it was," James said after the game when asked if he thought it was goaltending. "You didn't see me, when I talked to the ref? I put the ball on the glass, you heard it -- boom, boom."

And he's right. But at least from these two angles you can't really tell it's goaltending.

Oh nothing. Just The PROCESS blocking LeBron at the rim https://t.co/PHTyGHN8Y1

And here's another example of Embiid hustling back to stop LeBron from scoring.

It was clear by the end of the game that the Sixers big man was in James' head.

On a crucial possession* late in the game -- the Cavs were trailing 101-99 with less than a minute and a half remaining -- he tried driving to his left, but when Embiid came over to help, James stopped, tried a pump fake, looked to pass, and eventually settled for a seven-foot fadeaway that clanked off the iron.

*That play, by the way, came immediately following one Embiid's season-high six turnovers. So ... no harm, no foul?

I guess there was another place I could've started. Embiid hit all four of three point attempts in the game, improving to six-for-nine on the season.

Embiid with the 3 from the top of the arc @AdrianFedkiw pic.twitter.com/JzoTAtd7Pq

Some advice to the Cavs for the when these two teams meet again later this month: don't leave the big guy open from the top of the arc. You'll regret it.

Embiid with his second 3 from the top of the arc, splash! @AdrianFedkiw pic.twitter.com/QQ3TTrnkmW

The first thing that pops out at you about Embiid is his size. Whether he's 7'0" or 7'2" or any other number that's out there, one thing is for certain. He's not just tall, he's enormous.

Kevin Love found that out first hand on Saturday night.

"I think I just got hit a little bit after the play," Love said in the locker room after the game. "I went down, hit my hip and my elbow, but I was able to get up and stay loose and stay warm. But I'll be feeling that one for a while."

According to the veteran big man, it ranks up there with some of the hardest hits he's ever taken.

"It hurt," he said. "The only one [that was worse] was in Minnesota against the Lakers. Robert Sacre took me out of the air there once and I fell pretty hard. But that one [tonight], I was more upset, when I was one the floor, I thought I should've gotten an and-one."

Love added that the collision rattled him momentarily, causing him to think twice about driving toward Embiid again. He also said that he didn't think there was anything dirty about the play -- although a foul would have been nice -- and that Embiid even came over to check on him and make sure he knew it was accident.

After all, who is ultimately at fault for running into the brick wall? [Hint: Not the wall.]

Embiid is more than just a silky jump shot. He's also got some post moves.

“He’s a big boy; he’s a big boy," James said when asked to assess Embiid. "We’ve got quite a few in this league, and he’s up there. He’s a really good talent. And they’ve got him, and also Okafor too. They’ve got two beasts down there in the low posts and when they get Ben [Simmons] back and the rest of those guys, they’ve got some really good young talent.”

He's not quite on Okafor's level yet in that regard -- talk about unreal on the block -- but he's got a size advantage over almost anyone who matches up against him.

And finally, we come to his midrange jumper -- although since we already talked about his outside shooting and his post play, this one's kind of a no-brainer.

Embiid with a couple jab steps and the left wing jumper over Frye @AdrianFedkiw pic.twitter.com/eKMfpbL0NF

All that, and he only played 25 minutes.