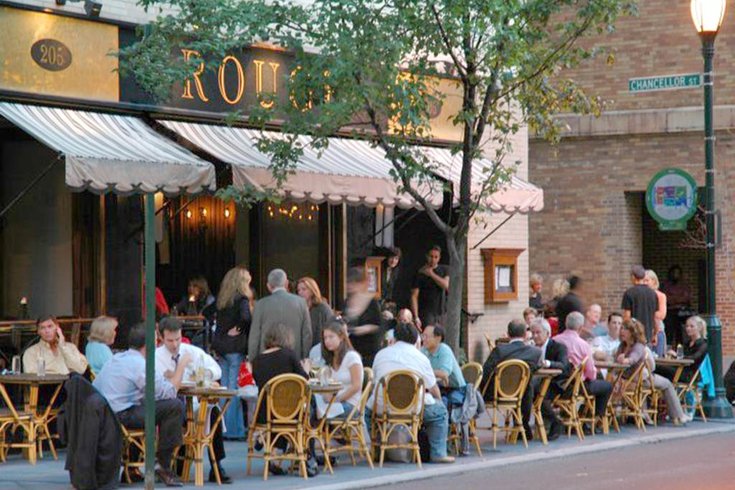 In addition to a fantastic menu, Rouge on Rittenhouse Square offers some of the ultimate people- and pooch-watching in all of Philadelphia.

Where the hell is winter?

Parks are packed. Al fresco dining like it's May. Folks catching a tan – outdoors.

Is this global warming?

That's the scuttlebutt on the streets, but the answer is not really. It's actually what I wrote about back in November with my long-range winter outlook – a record-setting El Niño acting as a weather blow torch.

Temperatures will average above normal all winter long, although more in the way of winter weather will roll in during February and March. I'm still sticking to below-normal snowfall this season, while others are actually forecasting above-average snow amounts – we shall see.

We will see a brief shot of modified Arctic air come Friday night and Saturday. Temperatures on Saturday will average about 30 degrees colder than it was this past weekend as readings flirt with 40 and wind chills on Saturday will remain in the 20s on gusty Northwest winds. But a quick moderation will commence on Sunday and by next week temperatures will spike back up into the 50s.

New Years Eve is quickly approaching and as of now, I do not see any significant threat of accumulating snow. Skiers hang on for the second half of the winter season.

By now I think you know the chances of a white Christmas around here is zilch. If we have an inch of snow on the ground by Christmas Day, I'll run naked over the Ben Franklin Bridge, so pray my forecast works out for the sake of humanity .

With temperatures on a record-breaking pace, tis the season for dining outdoors. Herewith, four of my favorite spots in the city to dine al fresco. (Warning: I'm not a foodologist ... Just a bored meteorologist.)

It's very reasonably priced (maybe because someone else picked up the bill) and has a truly international flair, with influences from France, Italy, Spain and Greece. We all shared plates of striped bass, tuna hamachi, meatballs and steak. The big bonus? Brick oven pizza delivered straight to our table from sister restaurant Zavino (which is always packed) located directly across the street. Had a blast and the staff was awesome. I'm no food critic but I do believe Greg Dodge, the owner of both Tredici Enotera and Zavino, has 13th and Sansom cornered .

I love Talula's Garden as it's one of the most romantic outdoor-in-the garden dining spaces in the city. Aimee Olexy's spot located on Washington Square is a true gem; it never disappoints. Mike Jerrick, host of Fox 29's Good Day Philadelphia, and I would hang there often – no, not as lovers, but as connoisseurs of fine wine and dining. Every dish is so damn fresh, with a definite bend toward the delicious healthy side. Dudes, if you're looking for that special place to bring that special someone, BAM! you just found it. Talula's Garden is a Valentine's Day must.

Ah yes, the original staple of Rittenhouse Square. If those walls could talk. Robert Wasserman's chic, people-schmoozing, flirt de flirt restaurant. Grab an outside table if you're lucky and watch the socialites swagger by as you eat the reigning king of patties, the Rouge Burger, and wash it gently down with your favorite cocktail. Of course it's also some of the ultimate people- and pooch-watching in all of Philadelphia. How could it not be with Rittenhouse Park just feet away? It's never a dull moment at Rouge.

And finally the pièce de resistance – Stephen Starr's "Parc." Located on Rittenhouse Square, this is a full-on French bistro experience without actually going to France or the legendary Balthazar's in New York City. Parc, too, is a supreme people-watching spot with more outdoor dining space than any of the restaurants that surround Rittenhouse Square. My advice: grab some succulent mussels, frites, along with your favorite bottle of French wine – and enjoy the show.