When his brother's special-needs basketball clinic shut down, Holy Ghost junior John Burke created his own 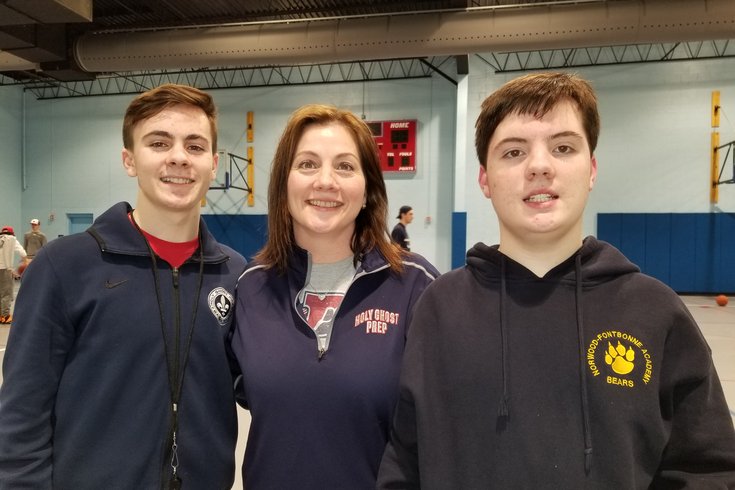 BENSALEM, Pa. — The smiling faces were unavoidable. They were everywhere. They were bright, and engaged, even at 9 a.m. on a brisk, March Sunday morning.

Amid the bouncing balls, and the lines of kids, and the stretching and white noise that came with it, John Burke surveyed the basketball court at the Holt Center, a new multi-purpose facility across the street from Holy Ghost Prep High School's main campus, giving directions, checking in with everyone he could to see how things were running.

Three months ago, Burke, 17, a Holy Ghost junior on the basketball team, had an idea. That thought, first presented to his parents one weekday night while they were watching TV, has blossomed into something singular for over 40 special-needs children in the Bucks County area.

Spurred by the closing of a local basketball program his autistic brother Tony attended, John took the initiative to do something about it. So, from February 17 to March 10, from 9 a.m. to 10 a.m. each Sunday at the Holt Center, Burke, with the help of over 40 Holy Ghost classmates, has run the Junior Firebirds Clinic, a basketball outlet for special-needs children like Tony, 16, and their families.

“I wanted to do something like this once I heard what happened to Tony’s program in December,” said Burke, a Maguire Foundation scholarship recipient at Holy Ghost. “I was originally thinking of having a dance. The Tim Tebow Foundation usually has this dance once a year in February, and I was thinking along the lines of that.

“It bothered me that Tony didn’t have anywhere to go.”

One of the things we try and encourage our kids to do is to help those who have the greatest needs... Not too many 17-year-olds think like John.

It took Burke a week to prepare a presentation to Holy Ghost president Gregory J. Geruson. Burke first went to his parents, John, a Philadelphia police officer, and Suzanne, who works for the city of Philadelphia. They were thrilled with the idea, which John (the son) then presented to Holy Ghost Prep college guidance counselor AnnMarie Dougherty. She helped Burke put together an outline and arranged a meeting with Geruson in December.

Most 17-year-olds have a tendency to think about the two inches in front of their face, which today encompasses what’s being posted on their Twitter or Instagram accounts and playing Fortnite or Grand Theft Auto.

His brother Tony was diagnosed with autism when he was four. The brothers are 18 months apart.

“Ever since he was little, John’s been a part of Tony’s life in every sport and in every social event Tony’s attended,” said Suzanne, who is the mother of five, which includes her own, John and Tony, and the three children the Burkes have adopted, her nephew, Mick, and nieces, Nicole and Kylie. “John would go to the therapy sessions with me and John (the father).

“John (the son) would go with Tony for a special-needs dances to make sure Tony was okay. That was when John was 11. He always made sure he watched over Tony. When you have siblings that close in age, there is a lot of compassion and John has always wanted to do the best for Tony.”

“It’s not the easiest thing to do,” Suzanne said. “What we try to teach Tony is always follow the rules in everything you do. Any situation you have to carry that calmness. You always have to keep their needs in mind and you’re always going to do everything that is best for them.

“I’m absolutely proud of John and I’ll tell him that. This event that he’s organized — and this is his, all his — gives parents a little bit of a break, because John lives it and we go through it ourselves. You see happy parents leaving and the kids smiling. John has put a lot into this. Seeing that makes it worthwhile.” 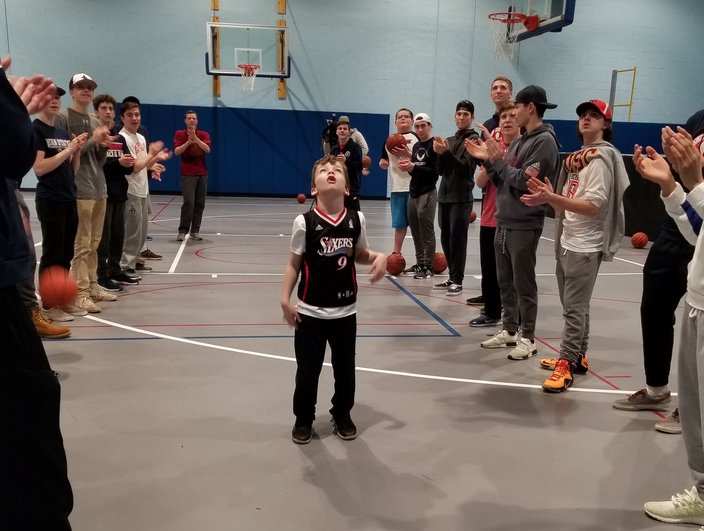 A look at Junior Firebirds Clinic inside the Holt Center.

Generous service to others is a hallmark of Holy Ghost Prep, the tiny all-boys, high-academic prep school founded in 1897 by the Spiritan missionaries and rests in a bucolic stretch of land in Bensalem Township.

The proposal was presented to Geruson in mid-December. John explained to Geruson that his brother is autistic, and the gym where Tony’s program was being held no longer providing them space. Was there any way Holy Ghost Prep could help Tony and the other special-needs children?

It’s not easy, but I don’t want this to be a one-week, or one-year thing. After I’m gone, I want other people at Holy Ghost to take this over. I don’t need my name on the flyer...

“We talked it through,” recalled Geruson, a 1979 Ghost graduate who is in his fourth year as president of the school. “Through my perspective, I thought it was a great idea. One of the things we try and encourage our kids to do is to help those who have the greatest needs. Obviously, these kids need attention and enjoyment we can bring into their lives.

“But the parents also need a break, too. Not too many 17-year-olds think like John. This program now has more kids showing up and our kids there to support them, where each of our guys gets paired with the boys and girls that are attending. It’s gotten such traction, not only finishing it out this semester, we see this as an ongoing program that John can build within the school and more of our students can be involved with it.”

For four-straight Sundays, John Burke got up at six in the morning, gathered up his Holy Ghost teammates, sat at a front table in the Holt Center lobby and registered names, made sure there were enough waters and soft pretzels to go around, and then watched over what involved 80 swirling kids on a basketball court, making sure everyone’s needs were met.

Next year, Burke would like to grow his clinic to 10 weeks. He wants to continue his efforts into the spring and summer — and beyond that. He knows the daily grind and constant vigilance involved with raising special-needs children.

“It’s not easy, but I don’t want this to be a one-week, or one-year thing,” stressed John, who carries a 4.35 GPA with four AP classes and the intention of one day going to Georgetown. “After I’m gone, I want other people at Holy Ghost to take this over. I don’t need my name on the flyer. That doesn’t matter to me. I see that my brother and these other kids are happy. All of these kids are having a lot of fun. That’s good enough for me.”