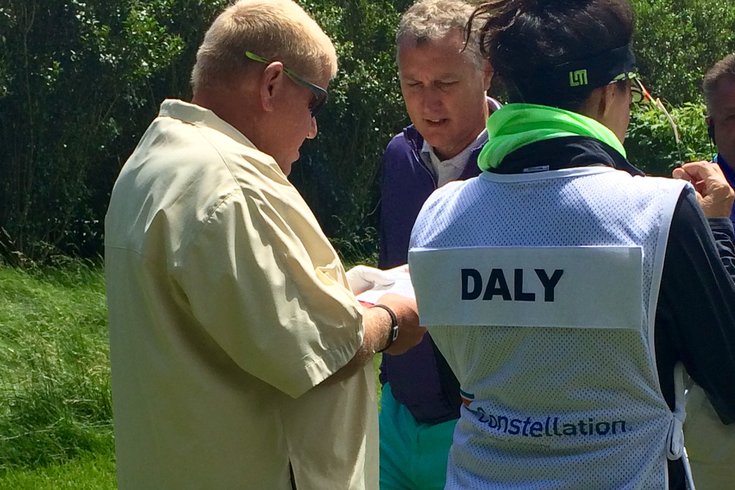 John Daly chats with caddy (and fiancee) Anna Cladakis and one of his Pro-Am teammates at the Philadelphia Cricket Club.

Standing over his ball on the third tee at the Philadelphia Cricket Club last week, John Daly could hear his fiancee (and caddy) Anna Cladakis discussing the professional golfer’s eating habits with a pair of writers while waiting for the group in front to clear the green.

“I was just telling them about where we like to eat when we’re on the road,” Cladakis said when Daly’s ears perked up after hearing the words Cracker Barrel, a well-known stop for anyone familiar with highway driving.

Daly, who along with Cladakis travels from tournament to tournament in an RV, laughed. He knows his diet isn’t what you’d call typical for a professional athlete.

“If you think that’s bad,” he shot back, “wait until you hear about my f**king drinking habits.”

Before the end of that sentence had even reached our ears, Daly was in his backswing — no practice, no warning — and sent his ball a mile high into wind that was stiff enough to bend the flagstick sideways.

His ball came to rest on the front of the green, and while waiting for the rest of his Pro-Am teammates to hit, Daly joined the already-in-progress debate over the best and worst fast-food restaurants. All day long, when he wasn’t talking about how he warned his son not to eat Chipotle years ago, the conversation would turn to the spread in that night’s NBA Finals game or other non-golf-related topics.

But when he would put out his cigarette and reach for his driver, everyone stopped to watch.

Daly’s swing is a surprisingly appropriate metaphor for how he, one of the most colorful characters in a sport that’s famously monochromatic, has lived the first 50 years of his life: aggressively fast, often reckless and totally unapologetic.

And in both cases — off the tee and in his life away the course — that style has not only introduced many new fans to the game, but also helped make him a favorite among some who had been following it for years.

If Tiger Woods helped make golf relevant again in the late 1990s and early 2000s, Daly was the one who made it fun again.

Now, at age 50, Daly is bringing the same kind of attitude — his attitude and the only one he’s ever known — to the Champions Tour.

It’s a strange contradiction in style, much like the one Daly was greeted with when he first turned pro back in 1987 and still remained some 20 years later. A lot of the players he’s competing against in the 50-and-over tour are the same ones he faced in the early stages of his career.

This past weekend’s Constellation Senior Players Championship, in which Daly finished tied for 49th, was his fifth event on the Champions Tour this year. After finishing in the top 20 in each of the first two, he missed the cut at the Senior PGA Championship and then finished tied for 59th in the Principal Charity Classic the following week.

"Everybody's knows what John Daly's been through because I've been honest about it, I've told them about it whether it's good or bad."

"The first two [Champions Tour events] were pretty good," Daly said. "Just kind of getting my feet wet, you know.  I didn't play real bad. Didn't play good at all at the [Senior PGA Championship], but my game is, you know, like I've said it before, I need I have, six, seven, eight weeks in a row to just get everything going again. ...

"Everything's just starting to come around. But I'm enjoying it. The guys have been great. It's great to have a schedule and play week to week, it's really nice."

Daly, who admitted that he hasn't played enough recently to be at the top of his game, is hoping that the consistency of the Champions Tour schedule helps him find a comfort zone he's been lacking in recent years on the PGA Tour.

"For me, selfishly it's a schedule," he said when asked why he'll benefit from playing with the seniors. "It's a lot of golf, which in my career, the more I played, the better I seem to play."

But Daly's relationship with the Champions Tour is a mutually beneficially one.

Already, just a month after officially joining, he's become one of their biggest draws. Images of Daly were all over promotional material leading up to the event. And on the big billboards scattered around the Cricket Club, there was Daly alongside tour veterans Bernhard Langher, who won his third-straight Senior Players over the weekend, Colin Montgomerie and Tom Watson.

He may be the Tour's newest old star, but judging by the crowds following him around all weekend, he's also one of the biggest and brightest.

"I think my fan base has stuck with me through thick and thin and I think I got a lot of my fans to come out and watch," said Daly. "You know, it was cool when Greg [Conrad] last week, the [Principal Charity Classic] tournament director, came up and was almost crying and he said, 'You've pushed the bar to 600,000 more dollars. We're going to hit the $2 million mark this year in charities.' And that really makes me feel good."

Chronologically, Daly is where he belongs. Mentally, however, he likely has more in common with those still on the PGA Tour.

But the where matters little when you have a fan base like Daly, one that he attributes to his devil-may-care lifestyle just as much as his ferocious swing.

"I think, you know, like I've told the media a hundred times, there's no skeletons in my closet," Daly said when asked why his fans have stuck by him for so long. "Everybody's knows what John Daly's been through because I've been honest about it, I've told them about it whether it's good or bad. I think the fans trust me in that aspect.

Daly does indeed "still hit it out there."

Compared to his younger self -- and many of the younger players on the PGA Tour -- he's just an average driver. But now that he's on the Champions Tour, Daly again finds himself atop the leaderboard when it comes to longest average driving distance (300.8 yards per drive). He led the PGA in that category nearly every year for a decade and a half (1990-2007) during his prime.

And when Daly wants to really let one rip, well, he  can do that too. He has two drives over 340 yards this year, including one of 341 yards at the Cricket Club this weekend.

However, it's more than just honesty and show-stopping tee shots that caused the crowds following Daly to remain the largest on Sunday despite the fact that he was 14 shots behind the leader entering play.

In order to become a fan favorite, you have to be several things. And near the top of that list is being accessible, something that's not always easy to accomplish when you're on one side of the ropes and your fans are on the other. For Daly, that's not a problem.

After bombing a tee shot on the fourth hole during Wednesday's Pro-Am, one of the few fans who waited out the thunderstorm that caused the course to be shut down twice in the same afternoon briskly walked along the rope diver with a flag in his hand, anxiously waving it and calling out to Daly for an autograph.

"Come on," Daly said, waving the young fan over.

He leaned further over the rope, trying to reach Daly, who never broke stride.

The somewhat surprised fan looked around, as if to check for security and make sure Daly's invitation wasn't going to result in him breaking any rules. Within seconds, he was handing his flag to Daly, who paused momentarily to sign it before preparing for his next shot.

"I love it," Daly said of his fans' support. "Home field advantage tends to be the best, you know, and I feel like I have that everywhere I go, which is a great thing. ... The fans are coming out and it's great. It's great for me."

That seemed to be an overarching theme for the once-troubled golfer -- he's happy.

And just like his golf swing has lost some of its ferocity with age, Daly's life away from the game has become a slightly subdued as well.

"Oh, I feel great," he said. "I've actually got a really tight family and I've got all my kids, Shynah and Sierra both live at my house in Dardanelle. My son, he just got out of school. He was in Core Golf down in Orlando and he just loves golf to death; that's all he wants to do is play golf. And I've got a great woman in Anna.

"Just things outside the ropes couldn't be any better."

As for life inside the ropes, Daly seems quite happy on the Champions Tour. And, somewhat surprisingly, he's embracing this next chapter in a way he never seemed able to when he was younger: one step at a time.

"And the Champions Tour is now kind of my home."