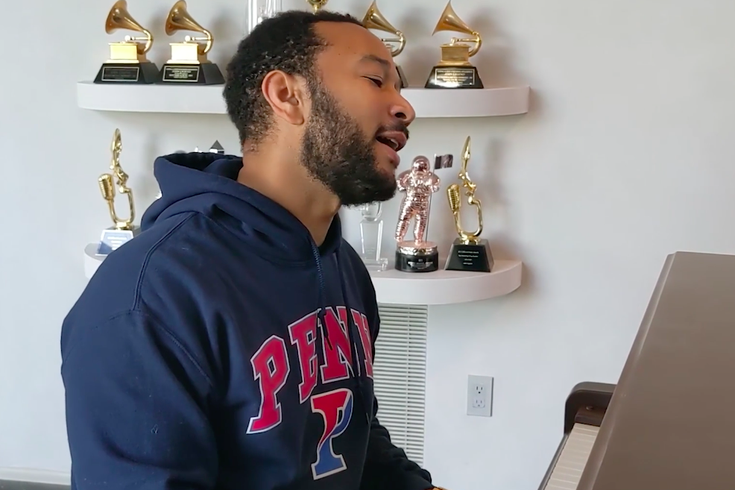 Screenshot via YouTube/University of Pennsylvania

Singer John Legend joins students in performing 'The Red and Blue' during the University of Pennsylvania's virtual commencement ceremony.

John Legend surprised the University of Pennsylvania's Class of 2020 with an unannounced performance during its virtual commencement ceremony.

The singer joined a student ensemble for a rendition of "The Red and Blue," the university's official theme song. Legend, a Penn alum, previously spoke at the university's 2009 and 2014 graduation ceremonies.

Monday's virtual event took the place of the in-person ceremony cancelled due to the coronavirus pandemic.

Penn President Amy Gutmann hinted at Legend's appearance moments before he joined the A Cappella Council.

"Join me and some of Penn's performers in singing 'The Red and Blue,'" Gutmann said. "And believe me, you are in for a treat."

You can watch Legend's performance of "The Red and Blue" below.

Legend graduated from Penn's College of Arts and Sciences in 1999. He studied English with an emphasis in African American Literature. He also sang in The Counterparts, an a cappella group.

The singer has since won nine Grammy awards and an acclaimed EGOT, an unique award given to those who have won an Emmy, Grammy, Oscar and Tony award.