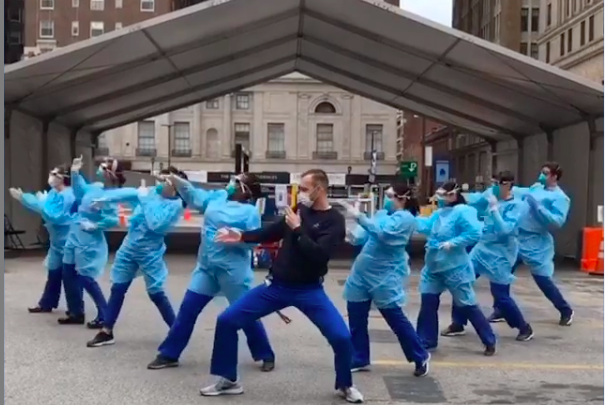 The "Swab Squad" a team of nurses at Thomas Jefferson University Hospital, has won a Webby Special Achievement Award for its viral dance to Ciara's 'Level Up.'

The “Swab Squad," a team of nurses at Thomas Jefferson University Hospital, won a Webby award for its viral dance videos and work on the front lines of the coronavirus pandemic.

The 24th Annual Webby Awards are honoring people and organizations that have responded to the crisis in novel ways using the internet. The Jefferson nurses earned a Webby Special Achievement award for "lifting the spirits of many while working hard to take care of the sick," the organization wrote.

"For answering the call to serve during this crisis, and for spreading positivity and joy using the internet, it is our great privilege to honor the Swab Squad with a Webby Special Achievement Award," The Webby Awards added.

The "Swab Squad" is a group of float and per diem nurses serving Jefferson's drive-thru COVID-19 testing site in Center City. The group drew national attention when it began posting videos of dance routines to popular songs, from Ciara's "Level Up" to The Weeknd's "Blinding Lights." The group appeared on "The Ellen Show" soon after its videos went viral.

The Webby Awards are presented by the International Academy of Digital Arts and Sciences and recognize achievement on the internet in various categories, including websites, video, social media and podcasts.

Last year, Philadelphia was well-represented at the 23rd Webby Awards. Rapper Tierra Whack won the Webby Artist of the Year award for her album "Whack World" and her "brilliant use of Instagram’s 60-second video limit to create experimental, genre-bending, and imaginative art."

Gritty and his social media team took home the People's Voice Award and Will Smith accepted the Webby for Events and Live Streams for his YouTube broadcast of "The Jump," which features the Fresh Prince jumping off the Grand Canyon for his 50th birthday.