The second-year WR didn’t need any extra motivation after being passed over by the Eagles, but Schwartz gave him some anyway. 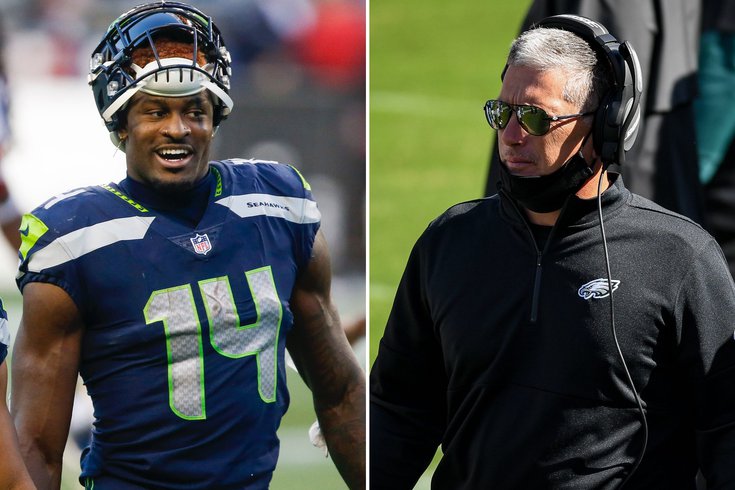 Seahawks wideout DK Metcalf didn't need any extra motivation on Monday night, but Jim Schwartz gave it to him anyway.

Jim Schwartz has a mental Rolodex of experiences built up over his quarter-century in the NFL, ones that he often uses for his job as the defensive coordinator of the Philadelphia Eagles.

Schwartz will also be the first to tell you that you never stop learning in this league.

If you're assigning blame for the Eagles latest loss, a 23-17 setback to Seattle at Lincoln Financial Field on Monday, you'd have to check a lot of boxes before you even get to the defensive side of the football which put in yeoman work against Russell Wilson and company.

In fact, only one player really hurt Schwartz's unit consistently and that's second-year stud receiver DK Metcalf, the freakish size-speed athlete who basically broke the scale for the measurables combine crowd. The Ole Miss product is also a sore spot for Eagles fans because Metcalf was sitting there at No. 57 in the 2019 draft when Philadelphia was looking at a receiver and decided J.J. Arcega-Whiteside was a better fit because of his production at Stanford.

But, the hackneyed could-have-had-so-and-so game is not what this is about.

It's about Schwartz trying to compliment Metcalf and the latter turning that into fuel for a monster 10-catch, 177-yard performance, which Darius Slay called his worst game as a pro.

“It was a great battle. ... I lost every 50/50 ball today," Slay said. "I am usually on the other side of that. Today, I am on the other side of it. I let the team down. I told the defense, that game was on me. I have to play better, but props to DK  for giving me the good work. We are competing every play, but I lost every 50/50 ball and I have to be better.”

Schwartz had caught up with Metcalf pre-game to tell the young receiver how much respect he has for Metcalf’s work ethic. Schwartz also mentioned that he coached Calvin Johnson, one of the NFL's all-time great receivers, in Detroit and that Metcalf is the closest facsimile to Megatron that Schwartz has seen since then.

So what was the sin?

After the game, Schwartz again found Metcalf and joked that you might not be Megatron just yet but he's on your way.

From Schwartz's perspective, both exchanges were meant as compliments and taken as such by Metcalf.

Metcalf, though, had a different spin.

When Schwartz was told about Metcalf's response by an Eagles spokesman, the DC was "shocked."

Understand Metcalf already had a chip on his shoulder when it came to the Eagles due to the 2019 draft.

“It’s kind of like coming home — you know, a place that had a chance to draft me but didn’t, so now I got to make them pay,” Metcalf said.

Back in January, Metcalf set an NFL rookie record with nine catches for 160 yards and a touchdown in the Seahawks’ wild-card playoff win in Philadelphia.

This time, things were supposed to be different with a three-time Pro bowl CB like Slay changing the landscape. Instead, Metcalf produced even more. Early on, the Eagles tried to bully the bully with consecutive personal fouls — one by Slay and the other by Malik Jackson — but any attempt to throw Metcalf off his game wasn’t working.

"I would say this is by far the worst game I have ever played in the league," Slay admitted. "I truly lost every 50/50 ball. I was probably O-for. I have never been that, but I say props to him, he played his ass off today, and I have to get better.”

Schwartz might have been the major reason Metcalf played his ass off this time.

“I mean, if I was a D-coordinator I wouldn’t say that,” said Seahawks safety Quandre Diggs. “[Schwartz] poked the bear, and then Slay had to go out and end up having to deal with that bear. So, hey, Slay needs to blame the D-coordinator for that.”

In the end, the teacher was taught the lesson and the Rolodex just got a new addition: Motivation can come from anywhere, even miscommunication.

If Davante Adams is within earshot in Green Bay on Sunday, the Packers' star receiver will likely get a generic "good luck" as Schwartz moves on down the line.