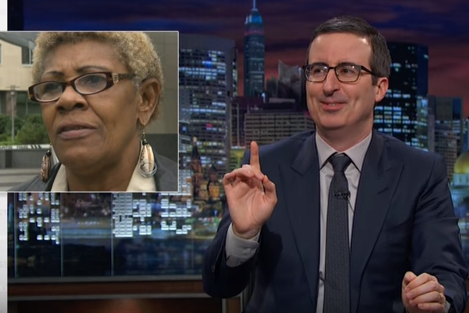 Pennsylvania's controversial voter ID law was struck down in 2014 by a state judge, but that didn't stop John Oliver from using the Keystone State as an example to critique the impact of such laws and similar rules across the country.

Season 3 of Oliver's show "Last Week Tonight" premiered Sunday, and in the first episode, the comedian tackled the issue of voter ID laws, why some advocate for them and why others oppose them.

He comes to the conclusion that the laws are generally an overreaction to a problem that isn't really there, noting how voter fraud is rare and cites several instances of how the Pennsylvania law affected voting in the state to do so.

First, he uses the example of Doris Clark, a handicapped Philadelphia woman who ran into several hurdles while trying to obtain an ID to vote.

She had lost her Social Security card, and after going back and forth several times between a PennDOT center and a Social Security office, she had finally had enough. More from a 2012 PennLive report:

Throwing a fit, she said, she declared, "I'm handicapped and I've done all I can do and I'm not going to vote." Clark threatened to leave and tell people outside the PennDOT center how she was treated. The PennDOT staff then got her to sit down and gave her an ID.

Oliver uses a clip from a CBS News report in which Clark, expressing frustration, says, "why am I going through all these things? I'm not Bin Laden's wife."

"Bin Laden's wife? That is a strange way to frame it," Oliver jokes.

Later in the segment, Oliver notes how several Pennsylvania Republicans publicly admitted after the law was enacted that their party benefited from the legislation.

He uses clips of State Rep. Mike Turzai and Chairman of the Republican Party of Pennsylvania Mike Gleason speaking shortly after the law was enacted.

Turzai predicted that the law would help Mitt Romney win Pennsylvania in 2012 and Gleason said after the election that the law helped cut Barack Obama's margin of victory down in 2012 from 2008.

"Oh no," Oliver comments, "You're saying the thing that everybody knows, but you're not supposed to say out loud."

You can watch the entire segment below (Pennsylvania bits are at 2:40 and 9:46):