Josiah Trotter is just 16, but the St. Joe's Prep middle linebacker is already a force

Josiah is 16. He’s driving his parents up a wall, because he seems to be growing out of his clothes as soon as they buy him new ones. The baby fat is gone. He’s St. Joseph Prep’s starting 6-foot-2½, 235-pound junior middle linebacker who has narrowed down his college choices to Penn State, Ohio State, Clemson and South Carolina.

His voice is deeper. He’s benching 275 pounds and squatting 435 for sets of five.

And in many ways, he’s already grown. He started as a freshman for the Hawks, replacing Jeremiah Jr. when he was lost for the season to an injury, and he had the pleasure of playing alongside Jeremiah Jr. for much of last season before his brother was hurt in the Hawks’ PIAA 6A state semifinal victory over Souderton.

Though perhaps the most trying time Josiah has ever faced came at halftime of that game. As a freshman, he sought out Jeremiah Jr. through the maze of people that mobbed Hershey Park Stadium when the Hawks won the state title. The goal his sophomore year was to share it on the field with him, side-by-side together.

That was spoiled when Jeremiah Jr. was hurt in the first half of the state semis.

Josiah had two choices. With Jeremiah Jr. on his mind, Josiah could have decided to run and hide from the moment, or actually do what Josiah did — play even better. He made the first two tackles in the second half after his brother left the game and finished with 15 total—most of them in the third and fourth quarters.

“I think Josiah was born to play linebacker, but he is going to get bigger... He became a leader last year, and I think that drive is even greater now, because he’s grown up even more." —Jeremiah Trotter, Sr.

“It wasn’t easy — I was emotional, my brother was hurt, he was on my mind,” Josiah said. “I kept telling myself to keep pushing through, and I was determined to play for him (Jeremiah Jr.). That taught me how to deal with adversity and work through it. Jeremiah was hurt my freshman year, but I was on the sideline when that happened.

“In the state semis, my mind was someplace else; it was with my brother. But I had to stay focused and continue playing.”

From a distance, like a papa hawk, Jeremiah Sr. watches but is never overbearing. If Josiah wants input, he knows where to go. Jeremiah Sr. had to do double duty during the state semifinal game, an immense influence in calming down Jeremiah Jr. while addressing the injury, and making sure Josiah was okay to continue to play.

Jeremiah was going through it at halftime, when one of the Prep assistant coaches informed Trotter about Josiah.

“Josiah had a little bit of a breakdown during halftime of that game seeing his brother hurt, and I remember going over and telling him, ‘Hey man, go out there and play for your brother, we need you to step up and be a leader out there and make plays. That’s what great players do,’” the former Eagles’ great recalled.  “I told Josiah that he had been through this before his freshman year, and he was more mature, which didn’t make his situation any easier. I’m very proud of Josiah, because that’s exactly what he did.

“He played for his brother and he played well. He’s in a great spot. His four college choices are all great programs. He can’t go wrong. I know it’s great to go and play with his brother, but he has to make decisions for himself. Everyone’s plan is not the same and Josiah has to do what makes him happy. When he makes a decision, I told him not to look back and keep it moving.” 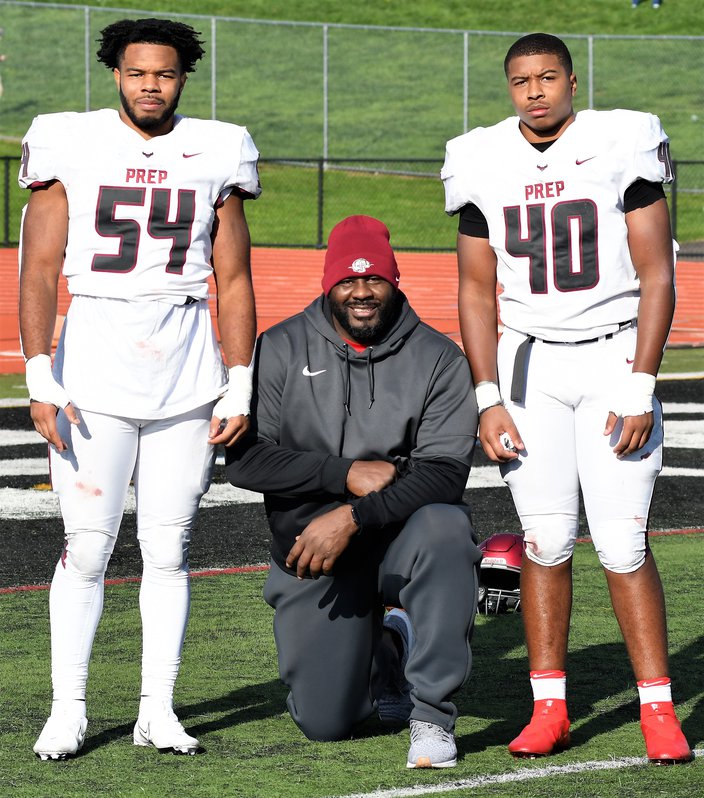 By the time he graduates high school, Josiah could be bigger than his father when he played in the NFL, which was 6-2, 262.

“I think Josiah was born to play linebacker, but he is going to get bigger, and I told him if he’s 300 pounds, as long as he’s able to still run and carry it, that’s all that matters,” Trotter said laughing. “If he’s 6-4, 300 pounds, more power to him. He keeps growing. He took another major transformation last year, and that came after going his freshman year from 5-10 to 6-1. He grew another inch and he just turned 16 in April.

“Josiah is just different than Jeremiah. Jeremiah always wears a serious look. Josiah is starting to get that edge like his brother. He became a leader last year, and I think that drive is even greater now, because he’s grown up even more.”

The Hawks are now Josiah’s team.

“First off, Josiah is just a great kid, with a great personality and he’s a great leader,” Hawks’ coach Tim Roken said. “He stepped in and played a lot his freshman and sophomore years with his older brother being injured at times, and he got forced into roles before they were comfortable to him. He’s set now.

“Josiah played the last seven weeks of the season, including the state championship, his freshman year. He didn’t blink when he had to do it last year. We have key leaders on defense, and Josiah continues to do a great job setting the defense.”

Josiah is weighing his college options. Penn State was among the first to offer him a scholarship, and Clemson made sure they offered him, too. He has input from Ohio State, with former teammates Kyle McCord and Marvin Harrison Jr. now current Buckeyes, and Josiah likes the South Carolina coaching staff and the campus.

At Prep, he’s known nothing but winning. The Hawks are three-time defending PIAA 6A state champions, the last two years with Josiah as the heart of the defense.

“I think I’m ready to speak up more this year, and we know this is a different team than last year’s team,” Josiah said. “We know we have targets on our backs. We’re ready for that. We can handle that pressure. There are some great teams out there, but if we keep working, and we keep worrying about what we need to do, and taking each week one game at a time, we could be there in the end again.”