Kevin Bacon, what are you doing, man? 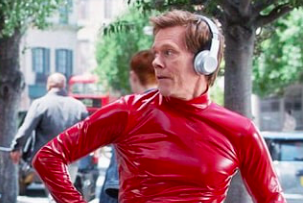 Oops does not satisfy the conditions of pop culture monotony one would need to simply say "meh" to a commercial featuring Philly native Kevin Bacon in a Britney Spears catsuit.

What is there to say about this?

To be clear, Bacon holds a special place in the hearts and minds of the Philadelphia community, probably right up there with the vaunted crispy pork product. The man's father practically reinvented the city after World War II and remains, posthumously, a bright star in the broader world of contemporary urban planning.

As an actor? Bacon has been a thrill to watch over a long and storied career. He's never really been typecast — always happy to do a heavy drama, skilled in cop and sci-fi genre work, brilliantly muted in comedic roles. His dalliance with Meryl Streep in "The River Wild" before turning heel is a wonderful piece of hindsight in film history, to say nothing of his standout work in "Footloose," "Tremors," "Mystic River," and the recent Whitey Bulger film "Black Mass."

It's also not as if Bacon has nothing better to do these days. "The Following" may have been canceled, sure, but he'll appear as the lead FBI investigator in "Patriot's Day," the Boston Marathon bombing movie due out in December. He's reportedly working on a television reboot of "Tremors." This is digging, but he's even donating money to schools, which is not what you do when you're lost in the game.

None of this seems to matter. Bacon, 58, got swept into a sartorially adventurous Apple Music commercial that's airing exclusively now in the United Kingdom. We'd be much harder on him for this deal, but he's repping a timeless Spears song, he put himself fully into it and he's already survived a movie called "Death Sentence." This is the longevity of Kevin Bacon at its finest.