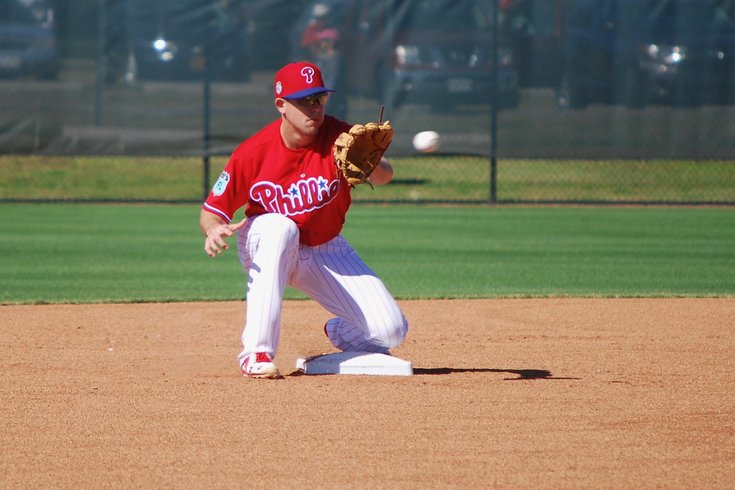 Scott Kingery, a former second-round pick in his first big league camp with the Phillies, went 3-for-4 with a home run in Tuesday's win over the Orioles.

The talented crop of offensive prospects in camp continued to make an impression on manager Pete Mackanin on Tuesday. Major league bench hopeful Brock Stassi and Scott Kingery played starring roles in the team’s 7-5 win over the Orioles at Spectrum Field in Clearwater, Fla.

The 27-year-old Stassi entered camp as a possible left-handed option off the big league bench and has continued to make a case for the role since games began last week. Stassi is 4-for-6 with a double and two home runs in four games.

Kingery, meanwhile, is in his first big league camp and doesn’t have expectations of making the major league roster –– he only arrived at Double-A last summer. But he sure looked like a future big leaguer on Tuesday, going 3-for-4 with a home run.

Kingery said he changed a few things with his swing after playing in the Arizona Fall League this offseason.

“Just (where I start) and trying to balance more and rely more on my back leg, so I’m not drifting and changing my eye level,” Kingery said. “I was fouling pitches off that I thought I should hit. So this lets me stay back on my back leg. … So far it feels good. I’m trying to make that my normal swing.”

Kingery was a triple short of the cycle and also made a nifty play at second base, too.

“Boy, he can really play,” Mackanin said. “I like what I see out of him. On both sides of the ball he looks like he knows what he’s doing.”

Kingery and Stassi weren’t the only Phillies to homer.

Two batters after Stassi’s go-ahead blast, Aaron Altherr launched a ball out of Spectrum Field, over the left field fence and both bullpens, too. Tommy Joseph got the home run derby started with a two-run shot in the second inning. The ball clanked off the rooftop of the Tiki Bar beyond the left field fence.

“None of them were wind-blown, that’s for sure,” Mackanin said of the barrage of home runs.

Tommy wrote his tiki bar order on the baseball before this at bat.

Even the guys who didn’t manage to join the long ball parade drew praise from Mackanin on Tuesday.

“I really liked Freddy’s (Galvis’s) at-bats,” the manager said. “He had some real good at-bats. He stayed balanced in the batter's box. He didn't come out of his shoes and swing. He didn't over-swing. That last ball (a groundout to first) he hit on the nose. He had three real good at-bats.

“Same thing with Howie Kendrick. He almost decapitated the pitcher. Little by little our major-league guys will start getting their timing down. It's good to see the young guys really make a good impression.”