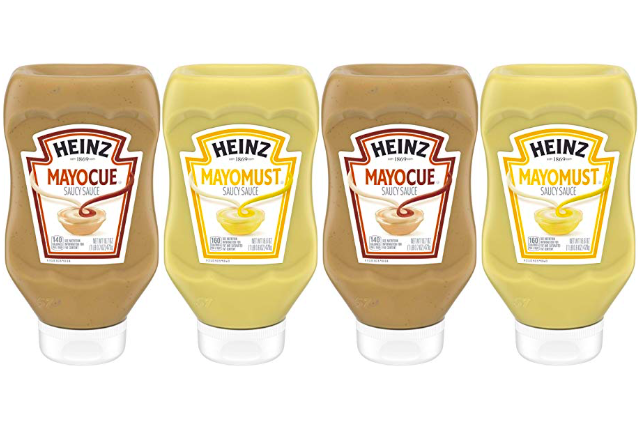 Mayocue and Mayomust are the latest condiment experiments from Heinz.

Last fall, the United States welcomed the debut of Heinz's bottled Mayochup, a combination of mayonnaise and ketchup that had already caught on elsewhere in the world.

Although it goes by different names — golf sauce, in some parts of South America — the fundamental properties of mayo and ketchup have always been well-matched as a condiment combo.

It now looks as though Heinz is about to test new pairs of mixed flavors.

The appearance of Mayocue and Mayomust was first reported Monday by Delish, which noted limited availability on Amazon, H.E.B. Grocery Stores and on Instacart via Giant Food Stores.

Heinz, based in Pittsburgh, has yet to confirm plans for the release of either new flavor.

Mayomust seems to be an obvious combo given the regular mix of mayo and mustard on a good deli sandwich. Mayocue, while a little unusual, could be a great addition to a salad or a grilled chicken sandwich.

It's not as if you can't keep a regular bottle of mayo in your fridge, too, in case you don't want the mix.

The news comes as parent company Kraft Heinz tries to rebound from a $15.4 billion write-down in February, resulting in a loss of a third of the company's value in stock. That development could lead the company to invest more heavily in reviving its brand, according to AdAge.

If that's the case, don't be surprised if you start seeing more marketing behind these new flavors. Eventually, your curiosity will get the best of you.