Kris Jenkins had a pretty good seat for the national title game, supporting UNC and his brother 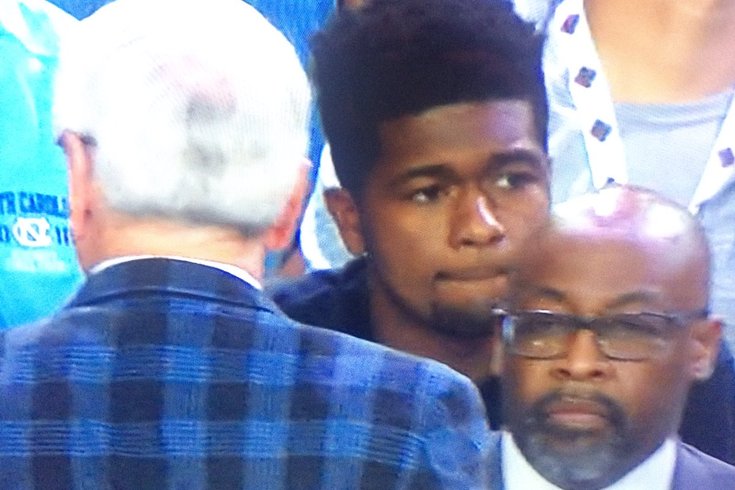 The story of last year’s Final Four was Villanova winning the national title in incredible fashion, with Kris Jenkins providing the country with the ultra-rare walk-off buzzer-beater at the horn:

It was a great moment, but one of the amazing subplots of “The Shot” was that Jenkins’ brother is Nate Britt, North Carolina’s backup guard. The two aren’t biologically related, but they consider themselves brothers after Jenkins spent much of his childhood and college years in the Britt household.

With North Carolina back in the title game after coming so close last year, Jenkins is playing the role of a good brother and happily supporting Britt. Even with the context, it’s pretty funny/awkward to see the man who ripped out UNC’s hearts last year in this very game sitting right behind their bench:

Poor Roy turns around to talk to his assistants and sees the Ghost of Christmas Past. pic.twitter.com/ZOvXKKjsRk

This is far from the first time that the other UNC players have encountered Jenkins since last year’s Final Four. Jenkins and Britt put some pressure on the other Tar Heels last summer, when he worked out in Chapel Hill. From ESPN:

Britt had run the idea past Tar Heels coach Roy Williams, who has known Jenkins for years since he had been recruiting Britt.

"He had known Kris and my relationship," Britt said. "All of our unofficial visits we came together, so Coach has known Kris since he was recruiting me. Kris has been here every year. Coach was fine with it, he understood."

"Hopefully... we can have two champions in our family." - Kris Jenkins on rooting for @UNC_Basketball and his brother, Nate Britt. pic.twitter.com/GkXhNVtMcC

So, it’s not like Jenkins is showing up out of the blue. Heck, he was there in Philly cheering the Heels on last year before his iconic shot. It’s a cool story and Big Smooth seems genuinely happy wearing UNC gear in Phoenix. Still, I think we can all admit this is at least a little strange, right?

UNC's mascot Ramses just left the floor and gave Kris Jenkins a hug. All is forgiven.