'This isn't a VP pick, it's an insurance policy,' Trevor Noah jokes 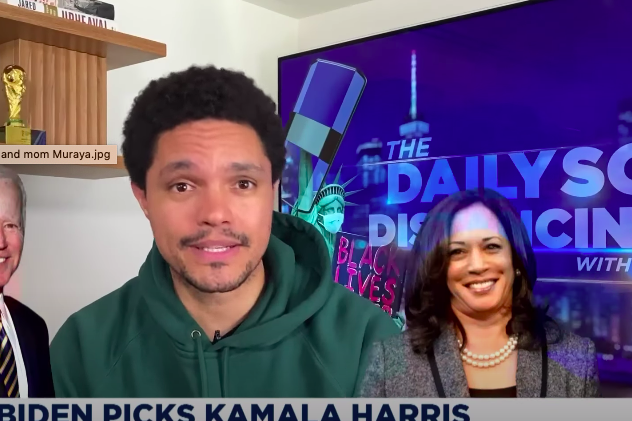 The Daily Show with Trevor Noah/YouTube

The hosts were quick to note the historical context of Harris' nomination. She is first Black woman to be chosen as a vice presidential candidate for either major political party.

"Say what you want about Joe, but the man went Black and he's not going back," Trevor Noah said on "The Daily Show."

MORE: Dramatic reboot of 'Fresh Prince of Bel-Air' is happening

On "The Tonight Show," Jimmy Fallon noted that Harris was raised by two immigrants and attended Howard University, an historically Black university.

Stephen Colbert shared a similar sentiment on "The Late Show," saying Trump will "have a hard time deciding how exactly to be racist about her" due to her Black and Southeast Asian heritage.

Noah and Colbert were both surprised that Harris was chosen after she notably criticized Biden's record on racial issues during a debate last year.

"Senator Harris is a surprising choice considering just how hard she went after him," Colbert said. "I mean, she hit him so hard he was spitting out teeth like Chiclets."

Noah recalled that Harris "destroyed" Biden at the debate, suggesting his pick for vice president may have been a more protective move.

"Part of me thinks that he picked her so that she can just never dust his ass in public again," Noah said. "This isn’t a VP pick, it’s an insurance policy."

Harris has been vocal in her support of Biden since dropping out of the presidential race last December, participating in virtual fundraisers and campaigning to preserve the Affordable Care Act.