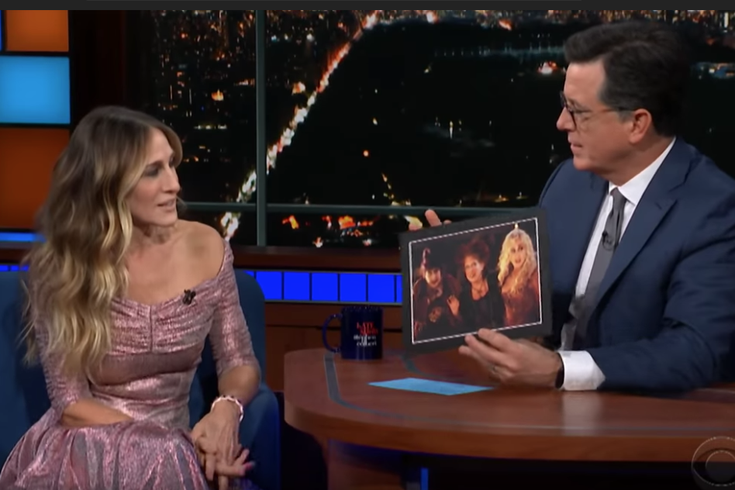 Sarah Jessica Parker talks about 'flying' during the filming of "Hocus Pocus" last night on "Late Show with Stephen Colbert."

It's Halloween and "Hocus Pocus" is quite literally all around. (Seriously, if you haven't watched "Hocus Pocus" once this season, did you even Halloween?) Sarah Jessica Parker appeared on the "Late Show with Stephen Colbert" on Tuesday night and talked Halloween candy and yes, "Hocus Pocus."

While Parker loved working on the movie (though maybe not as much as her love for putting Reese's in the fridge), she doesn't remember all that much.

Um, yeah, it’s actually that you like to suck the life from all the children of Salem, but whatever.

She spoke fondly of the film, adding, "I loved flying."

“They’d call ‘cut’ and they’d go to lunch or maybe they’d change the lens, and I’d just stay up there,” she said. “I could fit an entire New York Times up the back of the corset. And I found that the harness was comfortable, so I would just sit up there and read the Times while people took their breaks or changed the camera and sometime went to lunch.”

Disney announced a remake in September 2017, but no updates have since been given. The remake would feature an all new cast and a screenplay by “The Royals “writer Scarlett Lacey. The only returning member from the original film is David Kirschner, the film’s original producer.

He is set to executive producer the remake. However, Bette Midler was quite upset, saying she knew the film would be "cheap." Ouch. Well, whatever happens with the remake, we can all rest easy knowing we at least have one good "Hocus Pocus."

Watch the clip from "The Late Show" below.