'Hey Stephen' is one of 26 tracks that can be heard on the Pennsylvania native's re-recorded album, 'Fearless,' which was released last week 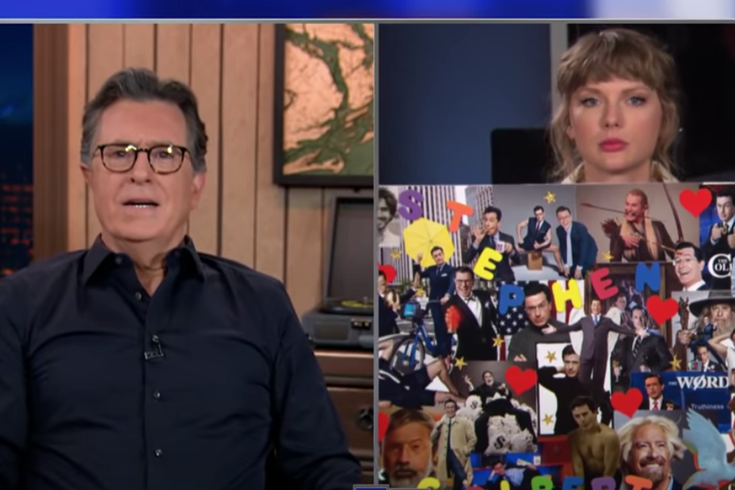 Taylor Swift's mood board for when she recorded 'Hey Stephen' consisted almost entirely of pictures of Colbert.

Taylor Swift has a history of writing many of her songs about ex-boyfriends and former lovers, but Stephen Colbert is convinced that one track on the musician's re-recorded album, "Fearless," is all about him.

The Wyomissing native appeared Tuesday night on "The Late Show with Stephen Colbert," where Swift and the comedian jokingly debated whether the song "Hey Stephen" is about the show's host.

Colbert opened up the segment by saying that he's always had a strong bond to "Fearless" after he jokingly received a signed copy of the album in 2009 while still hosting "The Colbert Report" on Comedy Central.

Colbert has insisted for years that "Hey Stephen," which appeared on the original version of Swift's "Fearless" album in 2008, was dedicated to him.

Swift denied Colbert's claim, saying that she was just 18 years old when she originally recorded the song. After Colbert said that he too was younger at the time, Swift rattles off the exact age of the comedian in years and days when she wrote the song: 44 years, 179 days old.

Colbert is shocked to hear that Swift specifically knew how old he was at the time, which she attested to being a huge fan of his work.

The host then thanked Swift for the signed CD, which prompted her to reveal that she knew the exact address of Colbert's old office in New York.

"So you know exactly where my office was in the building," Colbert said. "Are you sure 'Hey Stephen' isn't about me?"

"It's just the power of music, Stephen," Swift said. "Good songs make you feel like it's about you."

The artist then pulled out a mood board she used when originally recording the song. The board consisted almost entirely of different pictures of Colbert.

"Taylor, those are all pictures of me," Colbert said. "This is not vanity, it just really seems like the song is about me."

"Don't flatter yourself," Swift said. "'Hey Stephen' is not about you anymore than my '1989' album is about that year you spent waiting tables on the lunch shift at Scoozi Italian restaurant in the River North area of Chicago that, by the way, serves a really incredible slice of pizza."

After Colbert is bewildered by how much Swift knows about him, she responded by referencing another of her hit songs.

"You need to calm down," Swift said. "Which, by the way, is also a song not about you."

"But Taylor, even if that's the case, you can understand why maybe I thought the song was about me," Colbert said.

"I mean, not really, to be honest," Swift countered. "If I was going to write a song about you, it's too obvious to call it 'Hey Stephen.' You'd call it something more detailed. Songwriting is all about the details."

Swift then started rattling off hypothetical lyrics of a song dedicated to Colbert, where she mentions his work on "The Daily Show," appearing on "Law & Order," his middle name Tyrone and his social security number before Colbert jumps in to stop her from making that information public.

"No matter how much you insist 'Hey Stephen' isn't about me, I keep getting the strong feeling that it is," Colbert said.

Swift gave Colbert some parting words of wisdom, which included another reference to one of her hit songs.

"That seems like a you-thing for you to sort of process," Swift said. "But the thing about that feeling is that I think you should address it within yourself. I think it's something that you should process and then take the feeling that you're feeling and just shake it off."

Swift's "Hey Stephen" is about country music singer Stephen Barker Liles from the band Love and Theft. Swift had a crush on Liles when they toured together in 2008, according to PopSugar.

Other notable musicians who are believed to have songs written about them by Swift include Joe Jonas, John Mayer and Harry Styles.

"Fearless" was the best-selling album in 2009 and topped the U.S. Billboard charts for almost three months. It remains the most-awarded country music album of all-time.