Wawa holding 80s-themed week in tandem with ABC's 'The Goldbergs'

In Jenkintown, where the ABC sitcom is based, the store will get retro signage and host a viewing party 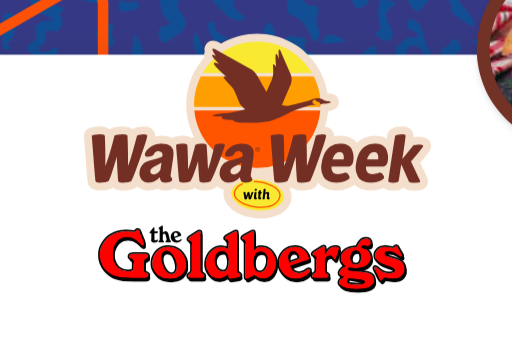 Wawa and 'The Goldbergs' are teaming up to celebrate the 1980s from April 16-April 23. The ABC sitcom, based in Jenkintown, will have its latest episode streamed at the local Wawa on April 21. Proceeds from the promotion will support Children's Miracle Network through the Wawa foundation.

Wawa customers will get a blast from the past starting later this week as the company kicks off a charitable, 1980s-themed celebration in tandem with the long-running ABC sitcom "The Goldbergs," the company announced Tuesday.

The partnership was created to celebrate the 7th anniversary of the Wawa Foundation, the convenience store chain's charitable organization that focuses on health initiatives, hunger relief and support for educators and military veterans.

From April 16 through April 23, all Wawa locations will feature music from the 1980s and audio clips from "The Goldbergs," which is based in Jenkintown, Montgomery County in the 80s.

It’s Wawa Week with @TheGoldbergsABC! And it’s all for a good cause. A portion of proceeds from coffee on April 16 and a specialty Goldbergs hoagie from 4/16 – 4/23 benefit @CMNHospitals.

A "Goldbergs Garlic Chicken Cheesey Parm" hoagie will be available throughout the week, with a portion of proceeds benefitting Children's Miracle Network.

The Wawa Week celebration will be more elaborate at the Jenkintown Wawa, located at 816 Old York Road, where some storylines from "The Goldbergs" have cropped up over the years. The store will get special retro signage both inside and outside. A "Home of the JTP" sign, which stands for Jenkintown Posse in "The Goldbergs," will also crop up.

At a viewing party sweepstakes on April 21, the Wawa in Jenkintown will stream the latest episode of "The Goldbergs." Customers will have a chance to enter the sweepstakes from April 14-19, with an opportunity to win t-shirts, gift cards and other prizes linked to the collaboration with "The Goldbergs."

Wawa Week with The Goldbergs

Get the camcorder ready, ‘cause you’ll want to remember Wawa Week with The Goldbergs benefiting Children's Miracle Network Hospitals! Join us April 16 – 23 as we look back, give back, and throwback with our area’s funniest family! You’ll be feeling the huggies and snuggies with the Goldbergs Garlic Cheesy Chicken Parm Hoagie.

The start of Wawa Week on April 16 coincides with the opening of the original Wawa convenience store in Folsom, Delaware County, in 1964. That store closed in 2016. The Wawa Foundation was created on April 16, 2014.

"We are thrilled to mark such a momentous milestone in The Wawa Foundation's history, one that could not have been reached without the unwavering support of our customers, associates and communities," Wawa CEO Chris Gheysens said. "As the Foundation looks to the future, we pledge to continue championing life-saving research and the care of people in need, leading hunger relief efforts and supporting the heroes who make a difference every day."

"The Goldbergs" is based on the real-life Jenkintown upbringing of the show's creator, Adam F. Goldberg. Since premiering in 2013, the series has become among the most popular sitcoms on TV.

Fictional liberties aside, Jenkintown's original Wawa opened in December 1995 and was actually located just south of the current store, at what is now a ZIPS Dry Cleaners. The chain didn't exist anywhere in the borough in the 1980s.

At the older location, which closed a few years ago as Wawa moved to 816 Old York Road, there were nightmarish parking spaces to the side of the store that required extreme caution for drivers backing out, let alone the mess of getting into the parking lot.

If you've frequented the Jenkintown Wawa over the past 15 or so years, then you know Don, one of the smoothest-talking employees the company has ever hired. As he rings you up, he says, "One'a these, one'a these, one'a those," and funnels your stuff into a bag in a very fluid motion. When he stamps your hoagie ticket, he does it with an authoritative crunch.

Had that store existed in the 1980s, it definitely would not have been ideal for any kind of Smash Ball from "The Goldbergs." A better place would have been across the street in the covered parking lot behind the former Strawbridge & Clothier department store building, where The Outback has held strong for more than 20 years. That lot was once a grungy skateboarding spot with loading docks next to the Drug Emporium pharmacy, which is now a storage locker facility.

Admittedly, this looks a lot cooler.