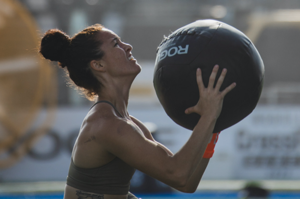 Be inspired by IBX Population Health manager and athlete Lauren Taylor's story of triumph over adversity.

I’m the proud owner of a second-place medal from the 2022 CrossFit Games. The journey to get to this point wasn’t easy. In fact, it was downright brutal. I have had to dig deep for strength and inner power to overcome some of my biggest obstacles.

The First Bump in the Road

I have been an athlete my entire life, loving sports from a young age. What began as something fun I used to do as a kid evolved into the potential to play in college. Being an athlete allowed me to be the best version of myself because it gave me the ability to live a healthy lifestyle.

In 2008, as a high school sophomore, I suffered a collarbone break during a basketball game, which, even after healing, caused years of shoulder and sensation issues in my neck, arms, and hands.

Doctors diagnosed me with neurogenic thoracic outlet syndrome (NTOS), a rare diagnosis at the time. NTOS occurred when the bundle of nerves from my spine down my arm was being squeezed as it went through my shoulder, causing pain and loss of sensation.

While I played field hockey at Shippensburg University for the following few years, I tried to relieve my issues by doing physical therapy. It was clear I needed surgery, but because my condition was so rare, many doctors didn’t have enough expertise in the condition to perform it. I struggled to find a doctor willing to do the surgery and to get insurance to cover it.

As starting field hockey forward and one of the leading athletes in the league and nation in assists, in 2012, I found a surgeon willing to perform the surgery to remove the anterior and middle scalene muscles, or neck muscles, and my first rib on my right side.

The surgeon soon discovered that scar tissue had developed around the bones and muscles in my neck and subclavian vein. So, the surgeon had to peel everything back like an onion, layer by layer. In doing so, he didn’t realize scar tissue was attached to the subclavian vein, so when he peeled that layer, he mistakenly opened the vein. I lost about half the blood in my body. Because I was a young, healthy individual, I survived; but it changed everything.

I developed permanent nerve damage and digestive issues from the blood loss, but I never let it impede my love for and ability to compete in sports. I helped Shippensburg win the NCAA National Championship in 2013, alongside my fellow classmates.

I continued to compete by running in road races and eventually discovered Spartan Race obstacle courses in 2019. I wasn’t only good at Spartan Races; I was one of the best in the world, earning a place on the podium in eight out of 14 races and ranking ninth in my age group globally. While races were paused during the pandemic, I used CrossFit to stay in race shape until they started back up again.

When Yet Another Door Closes, There’s Always a Window

In September 2020, a Mack dump truck rear-ended my car. I suffered from a traumatic brain injury, ataxia (poor muscle control and balance issues), and cervical and lumbar radiculopathy.

Since this happened during the height of the pandemic, many doctors were forced to impose new policies to stretch their schedules and limit the number of new patients they could see. So, it took me three months to obtain an appointment with the specialist I needed to see. Combined with my NTOS diagnosis, I faced a new set of seemingly insurmountable challenges.

I had to come to terms with the fact that I couldn’t do everything I could do before my accident. I had to trade my three-hour-a-day workouts for stationary bike sessions.

It was a harrowing, frustrating, and stressful realization for someone as active as me. I also had to face an unthinkable reality that I couldn’t push through and compete like I do any time I meet an obstacle. It seemed as if the door for competitive sports had closed on me.

But then a window opened.

I discovered that the CrossFit games had an adaptive division for neuromuscular participants, and I was eligible. While I was thrilled to have the chance to compete again, it was a hard pill to swallow. I went from being a national champion athlete to having this be my only chance to compete and within a category I was not mentally prepared to compete in.

I didn’t tell many people about my plans to compete. I spent most of my life in an abled body, doing things how I wanted to and when I wanted to. Now, I had to be completely intentional and think about how my body would respond to everything I did. I felt embarrassed and frustrated that this was my new reality, because I couldn’t be the same person everyone had always known me to be.

But CrossFit helped change my perspective. I overcame these feelings because I realized I could still be athletic; I just had to find another way to do things. Instead of a box jump, I could do a box step. Instead of running several miles, I could run one mile and row/bike the rest.

My gym community — Urban Fit and CrossFit King of Prussia — has been such a positive environment for me that it has helped improve my mental health and outlook on my condition. I was surrounded by friends who could challenge me, and I could challenge myself within the parameters of what I was capable of doing.

I registered for the CrossFit Open the day before the deadline and finished third in North America and fourth worldwide in my division. After connecting with and training full time with CrossFit King of Prussia gym owner, Aimee Lyons, I finished fifth in the semifinals, earning my spot at the 2022 NOBULL CrossFit Games.

Against all the odds stacked against me, I won second place in the Women’s Neuromuscular Division.

I hope my story, courage, determination, and grit inspire others who have had to grasp the same realizations. I hope my experience shows the friends and family of those with neuro conditions that your support means so much. Don’t assume we’re always okay. We may need a little push sometimes; you might just have to meet me where I am.

It helps that my family and friends understand that each day is different for me, and some environments might not be ideal. Little things like bringing me dinner instead of going out to loud restaurants, which could trigger my symptoms, are huge, and that understanding and accommodating go a long way.

While I promised my doctors that I would only compete in the Games once a year, having the chance to do it is satisfying. I gave every ounce of energy, passion, and tenacity and left it all on the CrossFit Games floor. I am determined to keep surviving and adapting. I have seen a counselor, but also being able to work out within a great CrossFit gym environment and compete helps me keep my mental state intact.

I’ve learned to be comfortable with being uncomfortable, meaning I can now step out of my comfort zone more than I ever have before. Just because something has changed in your life doesn’t mean it has to define your future. And I plan on living life to the fullest every chance I get.

Lauren Taylor is a manager of Population Health at Independence Blue Cross. She oversees the Population Health Specialist for PA and works closely on Medicare Stars and the IBC Quality Incentive Payment System programs to improve quality performance within Family/Internal Medicine and Pediatrics in our five counties. Lauren is a fitness enthusiast and can be found "inside the box" when not at work. Lauren resides in Coatesville, Pennsylvania with her dog, Copper.