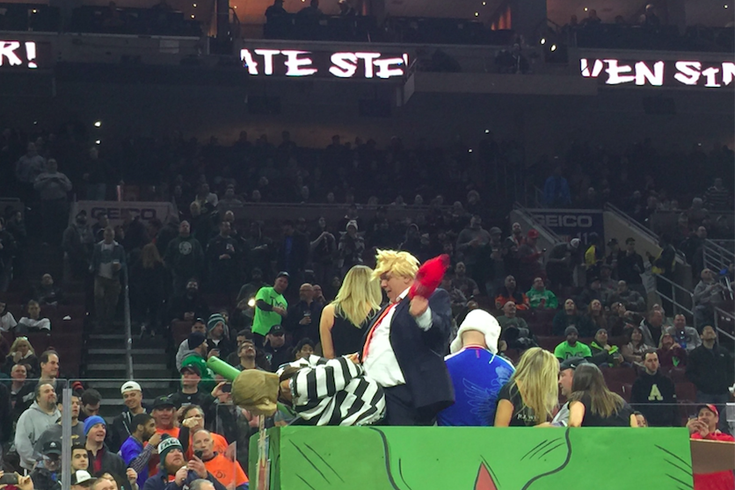 Nobody goes to Wing Bowl to bask in appropriate behavior. Duh.

If NASCAR’s all about crashes, the annual South Philly gluttony fest is about breasts – covered and/or bare – and the potential to drunkenly bear witness to projectile vomiting.

This is why people – mostly men – tailgate in the parking lot at 5 a.m. before they pack the Wells Fargo Center for the WIP extravaganza. And, this is why people – entirely women – join entourages as "Wingettes" to build customer bases for their respective strip clubs.

Every once in a while, though, something so noteworthy happens that everything else falls to the side and gives Wing Bowl haters all the ammunition they need to claim it’s the most offensive event in Philadelphia each year.

On Friday, that moment belonged to Mike O’Keefe and Shaina Marsten.

Members of contestant Hank the Tank’s entourage, they entered the arena aboard a Toll Man Joe float.

As the float made its way around the floor before delivering Hank to the eating stage, the duo performed simulated sex acts atop the float.

“We wanted to do a golden shower, with him (fake) peeing on her, but (WIP) wouldn’t let us.” – contestant Hank the Tank, of Trump and Hillary imposters in his Wing Bowl entourage

Granted, it initially struck me as, well, inappropriate. The general reaction from the Twitter audience which saw the photos I’d posted fell along partisan and gender lines.

That's to be expected in our highly charged political times, as was my initial disdain for these strangers representing a president of whom I'm not exactly enamored.

I wasn’t content to let a 30-second visual define my Wing Bowl coverage this year, though. Nor was I willing to judge strangers without hearing the motivation behind their artistry. So, I headed to the official WIP after-party at Toll Man Joe’s sports bar near Front and Oregon to catch up with the folks behind the display. 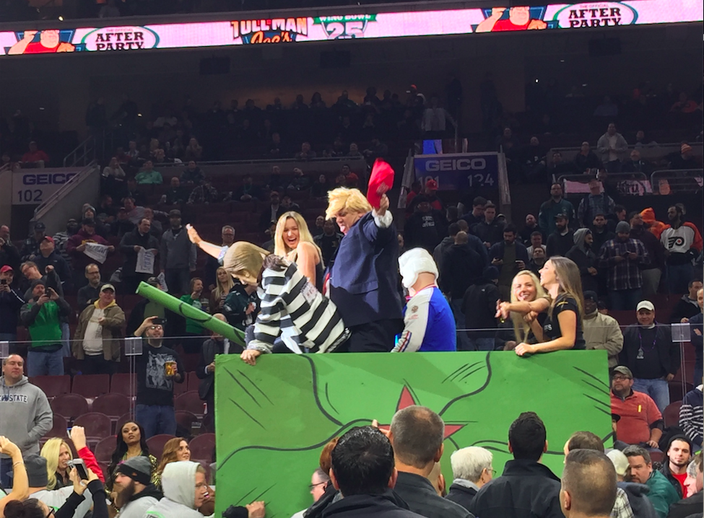 Mike O’Keefe and Shaina Marsten, dressed as Donald Trump and Hillary Clinton respectively, said their Wing Bowl skit was their way of telling the world that Trump is a winner and Clinton is a loser.

Upon entry, the Trump and Hillary impersonators had yet to arrive, but Hank the Tank told me they were en route.

“You see when he was banging Hillary?” he asked. “How’d it look?”

“We wanted to do a golden shower, with him (fake) peeing on her, but (WIP) wouldn’t let us,” continued Hank, who finished in 11th place having eaten 135 wings less than two hours earlier.

That was probably for the best, what with the arena already being a mess and the Flyers returning to the ice for a Saturday afternoon game. 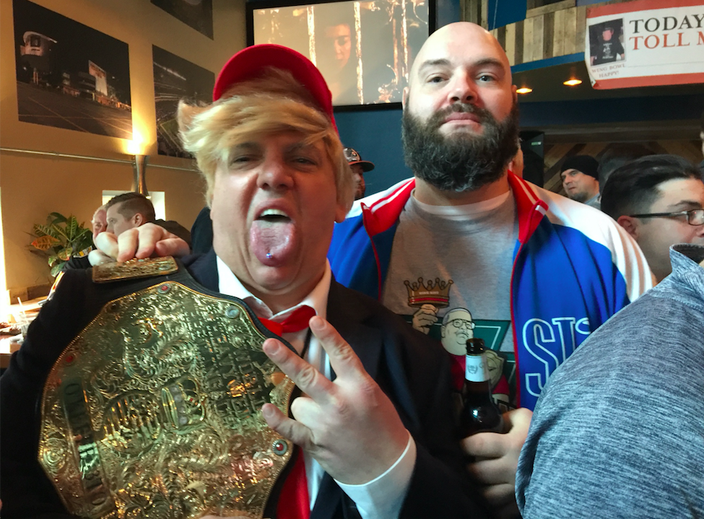 Mike O'Keefe and Hank the Tank talked about the latter's Wing Bowl entrance skit at the event's official afterparty in South Philadelphia. O'Keefe portrayed President Donald Trump in a racy rendezvous with someone portraying Hillary Clinton.

Within minutes – before Ric Flair’s arrival at a bar packed with those willing to pay the $5 cover charge – O’Keefe came strolling through the parking lot still donning his Trump wig, with a wrestling-style championship belt draped over his shoulder.

“Trump is the best. He’s a straight-up boss,” he said, intimating that the skit was, in fact, a political statement and commentary on what Trump did to his opponent during November’s election.

Then, O’Keefe pointed out “Hillary” was walking inside at that very moment. Without the mask or prison-replica shirt, she wasn’t easy to spot. He graciously called her over so she could explain what it was like to participate in the skit before thousands and thousands of people.

She, too, was a Trump partisan and Hillary hater. And she, too, was wearing a championship belt of the wrestling variety. I asked her for its significance.

“Because I feel like a winner,” she said. “And, unlike Hillary, I am a winner.”

With that – after laughing when Hank the Tank told them they’d already appeared on BBC News – they went into the afterparty to meet their adoring fans.