Like Lindbergh and Brown, Fernandez a reminder of uniting power of sports 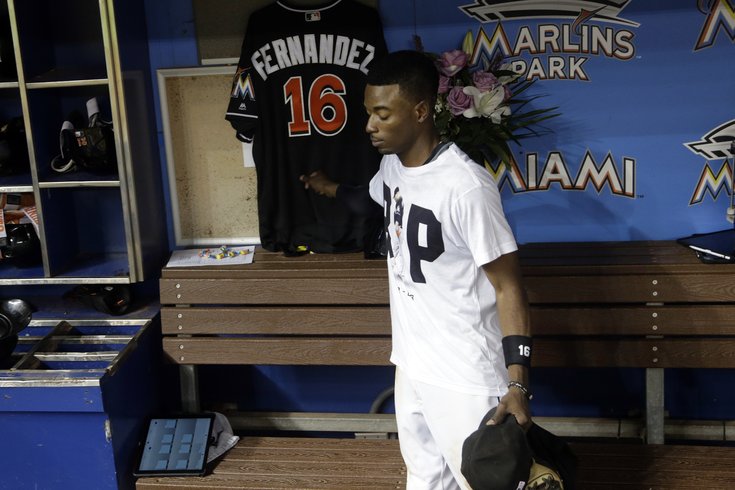 Miami Marlins' Dee Gordon touches the jersey honoring Marlins pitcher Jose Fernandez as he walks through the dugout after beating the New York Mets in the first game since Fernandez was killed in a boating accident early Sunday.

Like so many important touchstones in our lives, the real value of something is most accurately measured during times of triumph and tragedy.

This is especially true in the case of sports where a community, a nation, or even a world can be united by something as trivial as a sporting event. Then again, there are moments in sports that are not trivial at all, moments as powerful as the one that transpired on Monday night in Miami.

Like Lindbergh, Fernandez was by all accounts a young man who came to America, albeit by very different avenues, in search of a better life. And both simply loved to play the game.

The scene of Dee Gordon hitting a home run to open the Marlins first inning, and then turning his route around the diamond into a passion play of grief was as emotional a scene as any ever played out in American sports.

There were tears and cheers, and the entire drama was played out with every Marlin wearing a uniform with Jose Fernandez's No. 16. The evening started with an emotional tribute on the pitcher’s mound, and so many hats on the turf to honor their deceased teammate.

The Marlins were playing their first game since the death of their young ace, who perished in boating accident early Sunday morning. Fernandez and two other young men crashed into a jetty, and a generation of fans was once again confronted with the sickening reality of a young person cut down in his prime.

In Philadelphia, it has been a few generations since 1985 when Flyers goalie Pelle Lindbergh crashed his Porsche in an accident that ended his life. A few years later, there was the shocking news that the Eagles defensive lineman Jerome Brown had died in an auto accident. For so many of their teammates – guys in the prime of their lives as 20-something athletes – it was their first time dealing with the death of somebody they knew as a professional teammate, and the scars remained raw.

Like Lindbergh, Fernandez was by all accounts a young man who came to America, albeit by very different avenues, in search of a better life. And both simply loved to play the game.

There is, of course, a danger in looking back at any life, no matter how young or old, and highlighting only the positive. However, in the case of Fernandez, all you have to do is monitor the internet to see a kid who simply loved to play, and who coaxed a knowing smile out of an entire locker room and city.

It’s a lesson that is learned through the generations – no matter your talent, no matter your upside, no matter your strength of youth – should there be one lapse of judgement, it can end in tragedy. One mistake and it can all collapse, leaving in its wake a trembling locker room, a grieving fan base, and a community with a hollow soul.

Fernandez was especially close to the hearts of many in Miami by virtue of his route there from Cuba. It is a baseball market that is marked by empty sections of seats, but in Fernandez they found a young star who could make them turn on their media devices and show up for his outings.

However, like Lindbergh and Brown in Philadelphia, the lasting memory of Fernandez will be the game for which he was not there. The lasting memory will be a home run by Gordon, and the banners that will inevitably be placed in the stadium.

Sadly, his mortality has assured his immortality in south Florida. His name will be passed from generation to generation, a reminder that the games are played by special people who are living in the same world as all of us, with futures as fragile as a snowflake.

The power of sports is seen on a yearly basis. Some team somewhere will have a parade; there will be confetti when a star player holds up a statue; or a player such as Chase Utley will emphatically announce his team's championship status.

And then there are the eerily more important moments, those moments such as Lou Gehrig’s “Luckiest Man” speech; the baseball games in New York after 9/11, the powerful scenes on the ice and the diamond in Boston after the Marathon bombing, and now the memory of the Marlins in the aftermath of the Fernandez tragedy.

And then there are moments like the hope that the Philadelphia Eagles are on the brink of a new era with a great quarterback and you are giddy, or watch what happened in Miami and your heart drops.

There are times when it is so much more than rooting for the laundry.